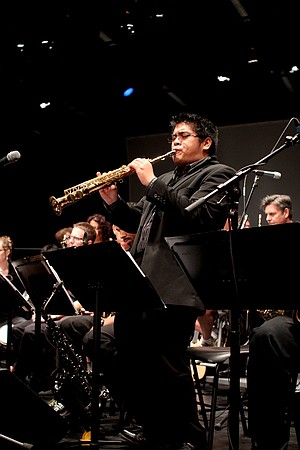 Born and raised in Southern California, Chaz Cabrera enjoys performing locally around San Diego. Inspired by his father and other major influences, Chaz fell in love with the genre of Jazz and devoted himself to learn the style. He currently plays a wide variety of instruments such as Saxophone, Flute, Clarinet, and Piano. Chaz currently attends Grossmont College and is planning on transferring to a prestigious music school majoring in Jazz Performance Studies. He is currently the lead tenor of Marty Conley’s Big Band Express and lead alto of Grossmont’s Jazz and Afro Cuban Ensemble. He also enjoys performing for musicals and loves to compose music as a hobby.

In the main stages of Chaz’s career, he and five other teens formed a group called Jazz Avenue, who competed in the national competition SchoolJam USA. Out of eight contesting bands, Jazz Avenue placed first and won the title of "Best Teen Band 2012”. They were awarded a trip to tour Germany and had the opportunity to perform on the main stage of the Musik Messe Convention. They have also performed for a multitude of well known festivals and venues such as, KSDS Ocean Beach Jazz Festival, Heritage Festival, Dizzys, Lestats, San Diego and Anaheim: House of Blues, Lyceum Theater, and more. Jazz Avenue has a current album out known as “Bridging the Gap” recorded at Signature Sounds.

Chaz also had the opportunity to perform for many musicals professionally. Under the direction of Tamara Paige, he had the opportunity to perform in the pit orchestra of San Diego’s Renowned Repertory Theater production of “Hairspray,” (2010) receiving recognition from the composer, Marc Shaiman. Later in 2011 Chaz was hired to conduct California’s Youth Conservatory production of “Spring Awakening” at the Lawrence Welk Resort. Chaz finally returns for another season at the Repertory Theater to perform for the musical “In the Heights” (2013), and closes off the year playing flute for the musical production of “Suds” (2013) at the Coronado Playhouse Theater.