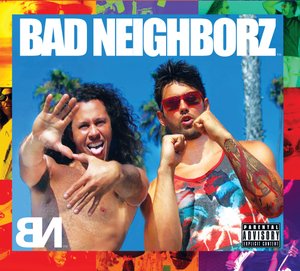 In 2011, Bad Neighborz was created. In 2011 Bad Neighborz released a five song E.P. appropriately named "Sunny D" after their home town San Diego. In 2011, they played over 100 live shows with headlining performances in San Diego, Los Angeles, San Francisco and throughout the west coast.

In 2012 Bad Neighborz were nominated in the San Diego Music Awards for Best Artist under the category World Music. Also in 2012, they focused on writing and recording their debut, self titled, full length album at Earth Verb Studios in Cardiff, California. The L.P. "Bad Neighborz" will have 14 tracks that embody the sound and style of the once 3-piece now 7 piece Rock-Reggae band and their lifestyle.

Bad Neighborz have been doing it all themselves! They have not had help from a record label or investor. They have been filming high quality music videos with 40 ft. camera cranes that they built themselves. They have produced, wrote, and paid for their whole album themselves. They market their sound online very well with their expert internet marketing skills. They manage and book their own shows.' This all may sound like the quality is sacrificed without the help of big record contracts...until you see and hear it for yourself.

"What I think that is different is that everytime I see Bad Neighborz live, I feel like I am apart of some sexy, fun California lifestyle. They make you feel you're apart of something different." - Sarah, fan from San Diego

"I know almost all of their lyrics because they're so catchy." - Branden, fan from Phoenix

Bad Neighborz has been featured in over a dozen publications both online and print such as, NugMag.com, SanDiegoReader.com, as well as music play on internet stations SurfRoots.com, Pandora.com and local San Diego radio stations 102.1FM KPRI and FM94.9. Bad Neighborz has also had music featured in local short films, surfing and off-road racing videos. Bad Neighborz music can be purchased at I-Tunes and Amazon.

The next big thing in Rock-Reggae is on schedule to release their full length, self titled, debut album & complementing high definition music videos on April 20th, 2014. Check out their music, see them live, watch their videos, socialize with them online, and GET SOME FREE BAD NEIGHBORZ MUSIC HERE: http://badneighborz.com/sunnyd/