Stoney B was born in Chicago. He grew up listening to his father, Lil’ Howlin’ Wolf, playing the Blues and his dad learnt his Blues from the Chicago Blues Legend, Howling Wolf. Stoney B is a Blue Blood Blues Man … the real deal.

Stoney B’s passion for the Blues really took hold when he began teaching himself the Bass Guitar at the age of 13 and formed his first band at the age of 15. He transferred his talent to Guitar and Vocals and since then he has continued to fulfil his heart felt desire of bringing his Blues Music to audiences around the US. During Stoney B's career he has played behind well known Blues Musicians such as Buddy Guy, James Cotton, Junior Wells, Koko Taylor, Johnny Guitar Embry and the Blues Kings, Son Thomas, Homesick James, Lovie Lee, Roosevelt Boobie Barnes and Willie Mississippi Foster.

He has come to California by way of the Southern states where he spent most of his time in New Orleans. There he played for 14 years in the clubs along Bourbon Street and in a well known partnership as a street musician with Grandpa Elliott. The ‘Stoney B and Grampa Show’ entertained thousands of people and is talked about all around the world. Grampa Elliott now plays for the international touring act ‘Playing for Change’.

In 2012, Stoney B, with 44 years of experience has become a highly accomplished Guitarist, Vocalist, Songwriter and Recording Artist of the Blues. He feels and shares at a soulful level the essence of the Blues with strong influences from Muddy Waters, BB King and Jimmy Reed.

Stoney B’s soulful licks and brilliant guitar riffs and his dynamic vocals will transfix you as he delivers heart and soul felt Blues. His quick wit and story telling will have you entertained and amused. Stoney B’s talent and wonderful gift of communication will be sure to grab your attention as he brings you into a truly enjoyable, masterful and often humorous experience of his entertaining Down Home Blues. 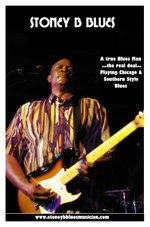