This entire thing is a huge embarrassment to the City of San Diego and is a graphic demonstration of the very point Olson was trying to make, that Wall Street and the Big Banks own our public officials. The prosecuting attorney who filed this thing should have his/her head examined. The judge is very obviously trying to avoid further embarrassment by not giving the jury any basis for jury nullification. I think Olson should be acquitted in about 2 1/2 minutes with a verdict written in chalk. What a joke.

The judge said the trial should "not [focus on] what his motivations behind the vandalism were."

But Deputy City Attorney Hazard previously stated that, to the City, motivation was a distinguishing element in bringing this case:

"The People do not fear that this reading of section 594(A) will make criminals of every child using chalk. Chalk festivals may still be permitted. Kids acting without malice may still engage in their art."

Excellent point. If "malice" is an element in this case then very obviously Olson should be entitled to talk about his First Amendment rights.

If the prosecutor must show Malice as a material element of the statutory "offense" here, then the defense should be able to show an absence of Malice because he had an objectively reasonable belief he was expressing his First Amendment protected political opinions. Malice is a state of mind, and the defense has a defense here and must be permitted to make it.

Additionally, abuse of prosecutorial discretion should be in a pre-trial motion to dismiss. If the City Atty is on record as saying the same conduct--chalk writing by a child on the public right of way--would not be a chargeable offense--then the trigger for the decision to prosecute here was not the CONDUCT, but the CONTENT of the writings. The paper trail showing very active pressure from B of A to prosecute is great evidence of this also.

Then there is always Jury Nullification.....

This guy needs to be recalled. He needs to explain his actions to the people.

Tosdal exited the court room shortly after. "I've never heard that before, that a court can prohibit an argument of first amendment rights"

Judge Shore has now become the lead prosecutor, b/c he KNEW this case would not result in a conviction if ALL the facts were open to the jury-so he gamed and rigged the trial.

50 people in the Courtroom tomorrow with chalk in their hands ?

Or some great Parents with their KIDS , chalk in hand, for a Civics lesson in the meaning of the First Amendment ? Because kids cannot have the required predicate Malice.....

We can only hope that the jury looks at the absurdity of this claim of vandalism for what it is, namely an attempt to stifle criticism. I would not call an acquittal in this case "jury nullification." I'd call it common sense.

The problem is the judge is acting like the lead prosecutor by excluding evidence/legal theories that would sink the prosecutions case, like a free speech defense. This shit happens ALL the time. Cynthia Sommer was falsely convicted of 1st degree murder b/c the judge let the prosecution argue absurd issues (like she bought breast implants!!) in 98% of the case, instead of material evidence that pointed to guilt. If it can happen in a 25-life murder trial it can happen anywhere.

This is absurd. VOTE TO ACQUIT if you're on the jury -- you have ZERO obligation to listen to so much as a single word of the judge's orders. VOTE OUR CONSCIENCE.

Ignore the First Amendment? Yeah. That'll stand up to an appeal. THIS IS FASCISM AT WORK, CRUSHING SOME CITIZEN BY ILLEGALLY IGNORING THE ULTIMATE LAW OF THE LAND.

Can we show up at the closest BoA branch to the courtroom armed with chalk? How many will the SDPD arrest? This story is really pissing me off.

The best hope here is that at least one juror will refuse to vote for a conviction. Misdemeanors that have hung juries are only rarely retried--although Goldsmith could decide to do it--and he would have nothing more to worry about. One reason we have juries is to do what you suggest, i.e. vote one's conscience. Over the past couple centuries the US system has come to a point of telling juries that they are only judges of fact and evidence, and not the appropriateness of the law or the charges. That is not where it all started, and what is now dismissed as "jury nullification" was once the role of the jury. No matter how much instruction a judge gives to a jury and no matter how he/she cajoles the panel, people still think and react to a situation that they have to judge.

BTW, I doubt Olson would get jail time even if he were convicted of all of the counts. For pity's sake, it was just chalk, and having a judge slap him with the max jail time for each count (that's where the 13 years came from) is highly unlikely. Some probation and public service (perhaps removing graffiti) is more like it. But don't forget that this sweeping ruling opens the door to a successful appeal. And if Olson is convicted, many folks, including me, will donate to the cause.

The irony for me is last year I went to the San Diego police and attorney's office to get this guy who chalked over a hundred swastikas and other Nazi graffiti on an elementary school, and they told me that this Nazi was protected by the First Amendment and they couldn't prosecute him. Nazis in elementary schools is ok, but criticizing a bank is not? We need to dump Goldsmith now! 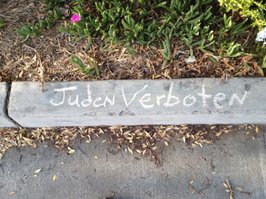 This is insanity. This judge is absolutely clueless. Why doesn't Jan Goldsmith, who supposedly just learned about this, pull the plug?

We have to protest this trampling of free speech rights.

CHALK-IN Bring your chalk (and your kids) to make drawings about freedom in front of the city attorney's office building at the Civic Center on Monday morning, 9 a.m.

Address of City Attorneys Office is 1200 Third Ave. His offices are in the big brown office building across from the Civic Center. I think it's private property up the stairs on the brick part (if memory serves from Occupy voter-registration arrests), so do your drawings in the plaza area just down the stairs. 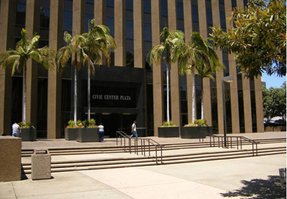 Who was the genius that appointed this judge?

Interested readers are hereby invited to "CHALK-U-PY San Diego 2013" - a protest of the arrest of Jeff Olson for writing political messages in Chalk, and the suppression of the First Amendment of the Constitution in court! This Saturday (6/29) Protesters intend on creating a chalk mural of the Constitution with focus on the First Amendment in front of the San Diego Hall of Justice. Details: https://www.facebook.com/events/475647312514564/

How is it possibly relevant that some Bank of America apparatchik was "frustrated?" As far as I'm concerned that opened the door to permit the defense to talk about the First Amendment. I can't decide if the statement from the City Attorney's office is pure BS or hogwash. What a travesty.

June 29, 2013
Jeff Olson, the Mad Chalker, prosecuted by city attorney for words in front of Bank Of America

In mid-February of 2012 Jeff Olson walked through the aisles at the CVS Pharmacy on University Avenue in North Park. He was there to pick up gifts for his nephews. The 40-year-old former staffer for ...

I'm very proud of the Reader for this piece, the entire coverage of Jeff Olson's ordeal, and for exposing the audacity of the City Attorney for prosecuting Olsen with taxpayer dollars (the City Attorney should not only be dismissed but also be order to pay all court expenses out-of-pocket). This made National news, and thanks to Mr. Hargrove, it is a perfect example of how alternative weekly publications are notoriously necessary, since mainstream media fails to provide proper coverage on how all branches of government are so easily manhandled by huge corporations. Olson has proven his point here, even more so than having done nothing more than drawing what amounts to harmless hopscotch chalk patterns on city sidewalks, in that large corporate entities seem to be powerful enough to direct the government to cast off a shoe and use it to smash us often-helpless slugs into submission. Good job Mr. Hargrove, and good job Mr. Olson, I thank you both.

If the Bank of America did force this prosecution and the City Attorney filed and pursued it in order to further his political ambitions (quite a miscalculation, if true), then I think the Bank should be sued in civil court for malicious prosecution and abuse of process.