Bastani is a hero, and I hope he wins. Shame on the city knowing a situation was dangerous yet letting people die.

But you're right about the bigger issue, Dorian. We need a lawsuit to follow up on civil servants intentionally and consistently going around The Brown Act and California Public Records Act.

These laws were implemented to eliminate government being a "black box" with no transparency and therefore no accountability. Elected officials and staff clearly resent written communication for providing this clarity. I'd say the emails you quoted provide presumptive evidence for such a suit.

The Statement of "Katie Keach" , The City Spokesperson, in the article is "False Statement". She has replied to San Diego Reader that:

"The City of San Diego encourages employees to come forward to report concerns about safety, waste, fraud and abuse in whatever manner is most appropriate to ensure we continually work to strengthen our services to the community".

As a former Resident Engineer and Employee of the City, I have no doubt that this statement is TOTALLY False.

As another example: In another incident in 2013, I was even "REPRIMANDED" for "Sending" a "Correct Safety Warning" via the City Email to one of the residents of San Diego in an "Unsafe Conditions During Construction" to prevent "Injury" to that resident.

In 2013, when I opposed such an unlawful item in a "Written Reprimand", even "JAMES NAGELVOORT" , who is the "DIRECTOR OF THE CITY OF SAN DIEGO PUBLIC WORKS DEPARTMENT" , supported "Unlawful Statements" by David Zoumaras against me and the Public San Diego although he knew very well that my "Safety Warning" was correct and reasonable ....Unfortunately, some of these irresponsible individuals such as "James Nagelvoort" are in "MANAGERIAL POSITIONS" in The City of San Diego. 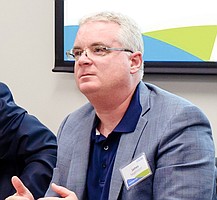 James Nagelvoort , Irresponsible Director of The City of San Diego Public Works Department, who is against "Public Records Act" and "Public Safety". These types of individuals even should not be in Managerial Positions in any Public Entity. 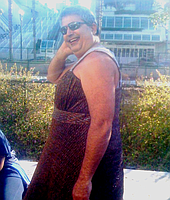 With "Respect" and "No Offense" to "Gay" and/or "Transgender communities" and/or anyone with any "Sexual Orientation".////// Picture of David Zoumaras, retrieved from The City of San Diego Public Records, He was "Deputy Director" under immediate management, Support, Approval and Control of James Nagelvoort

Dorian.... I was hired by The City of San Diego in 2008. My first so called 'Supervisor', (who was a very incompetent/dishonest supervisor), was Reza Taleghani. He was the "FIRST" individual in The City of San Diego who elaborated "Unwritten City Policy" against "Public Records Act" for me. His statement was worse than the statement of David Zoumaras in the article against "Public Records Act".

Reza Taleghani, for multiple times, elaborated for me that there should not be "Any Written Evidence/Track" of sensitive topics in the City Email System. He called this matter as one of the "RED LINES" of the employees in "The City of San Diego" for the managers.

In an incident in 2010 and in an "Email" to the Section Head in the City , Lisa Adams, I opposed against one of his "Fraudulent Concealment".

In 2011, He was also one of the individuals in the City , who rejected and denied my "Safety Warning" which resulted in death of Ms. Joan Milazzo. Taleghani's repeated words for me was ((((( WHO CARES )))).

In 2012, I declared , in written, the participation of Reza Taleghani against "Public Safety" to the Deputy Director, David Zoumaras.

In another incident in MAY 2011, I noticed the possibility of development of "MICRO CRACKS" in "LUSARDI BRIDGE" in San Diego and requested the "Bridge Section" for Bridge Inspection. Reza Taleghani "CRITICIZED" and "BLAMED" me that why I had brought this matter to the attention of "The City Bridge Section Head", Frank Gaines , by email, and Taleghani had no other choice to be involved in the "Email String". He requested me not to involve him in any EMAIL with subject of "Public Safety", although he was a so called "Supervisor". Shockingly, I encountered the situation that even "FRANK GAINES" , The City Bridge Section Head, was "ANGRY" and "UPSET" of me that I had brought up the "SENSITIVE SUBJECT" of "DEVELOPMENT OF MICRO CRACK" in "LUSARDI BRIDGE".

In 2011, Reza Taleghani had requested Lisa Adams (Section Head), that he DOES NOT LIKE to be in the EMAILS with subject matter of "Public Safety" because of the "Possible Responsibility" that might be caused for him.

Following is the picture of this Irresponsible so called "Public Employee". I strongly believe that the existence of such "Irresponsible Individuals" in supervisory positions is "WASTE OF THE TAX PAYERS MONEY". These individuals are against the people of San Diego. 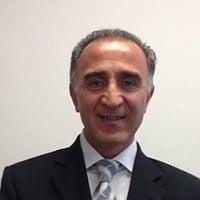 The name of the presiding Judge in my current case is "JOEL M. PRESSMAN". I should wait and see how this "Discriminatory Judge" make decision and manage a FAIR JUDGMENT which should be his duty.

This Judge, Joel M. Pressman, is fully aware of the conduct of The City of San Diego against me, Public Safety and "Public Records Act". Following is the Picture of the Judge:

So far this Judge, attempted to "UNLAWFULLY SUPPRESS" me in the court. I am self-represented and he has assumption that I do not understand his unlawful conducts. This Judge is abusing his "Judicial Immunity" against me in favor of The City of San Diego and against the "Public of San Diego".

It is "RIDICULOUS" and "FUNNY" that how this JUDGE , click with the "Deputy City Attorney" in the court hearings against me !!!

I have filed a "Motion to Substitute" this Judge from the Case.

/// Joel M. Pressman , San Diego Superior Court , Dept. 66/// A discriminatory Judge who has demonstrated negligence against the "PUBLIC" of San Diego. On 10/04/2016 he even attempted to fraudulently and oppressively "DISMISS" my case against the City not only because of his discriminatory animus against me but also to prevent "Elevation" of important matters against The City and Managers in The City. In another "SHOCKING" and "UNBELIEVABLE" unlawful conduct in the Judicial System by this Judge, on 10/19/2016 he "CANCELED" my scheduled "Motion for Summary Judgement/Summary Adjudication on 01/07/2017" and scheduled it for The City of San Diego for the same day on 01/07/2017. In fact, on 10/19/2016, this judge "STOLE" my "Scheduled Motion" and gave it to "The City of San Diego". This Judge "Recklessly" and "Unlawfully" abuses his "Judicial Immunity" against me. This Judge has attempted to "OBSTRUCT" my "JUDICIAL RIGHTS".

Corruption in The City of San Diego is beyond the subject matter of this article. In another incident during my employment, I was even retaliated for my opposition against "FINANCIAL CORRUPTION FROM PUBLIC FUND" with the amount of about $150,000 , in favor of "BROTHER" of one of the Managers in the City who was the CEO of one of the developers in San Diego. There was heated arguments in the office of work about this corruption. The name of that Manager was "Darren Greenhalgh", Deputy Director in the City of San Diego. I even received the following "Statements from Supervisors" in my "Performance Evaluation" to calm me down and "Covering Up" this conduct:

"Although there are sometimes disagreements and on-going negotiations between the City and the developer during Course of construction when reviewing invoices and change orders, I have observed Fred(ie. me Farhad Bastani) always remains calm and professional and threat others with respect" (Performance Evaluation by Mike Arnold and Lisa Adams)

Before receiving Performance Evaluation, Lisa Adams (Section Head) approached me in the office of work and stated to me:" Why you do you oppose this Change Order? Do you know that the CEO who talked to me is Brother of Darren Greenhalgh". This statement of Lisa Adams had sparked arguments in the Office of Work.

The title of the projects that this Financial Corruption occurred was "Camino Del Sur Inside Lane Widening, T6". The names of the supervisors were: Lisa Adams and Mike Arnold.

Later, Darren Greenhalgh, participated in Termination of my Employment.

Dorian... following is another example of "No-Email Policy" in The City of San Diego:

I received a "Performance Evaluation" on 02/25/2016, in which the immediate supervisors attempted to "CONCEAL" and "COVER UP" the "Serious Wrongdoings" of the City in the incident of the Death of Ms. Joan Milazzo in 2011.

The same day on 02/25/2013, there was an "Argument" between me and supervisors for their conduct against "Public Records" and "Public Safety".

" Do not reply....Talk to him in person . Don't reply on the last email either" (Lisa Adams)

See the picture of the email in attachments.

Managers/Supervisors are very ATTENTIVE to follow "NO-EMAIL POLICY" in sensitive topics such as "Public Safety". Their conducts are totally against "Public Safety", "Public Interest" and "Public Records Act". They attempt not to leave any "Written Track/Evidence" of any of the "Wrongdoings" in "Sensitive Topics".

The so called "Public Records" in The City of San Diego is not reliable at all. 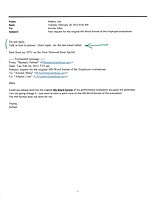 Dorian... I just read this "JOKE" in The City of San Diego Website:

The City of San Diego has already have "Unwritten Policy" against "Public Records" and then Mayor Faulconer "WASTES" public fund for such programs.

"Fish Rots From Head to Tail"

Someone should chase down these guys at the Court.

Dorian...find the following recent statement of Mayor Faulconer in the link below:

“Transparency and efficiency should be a part of every local government’s DNA..." (Kidding Me!!!)

It would be more beneficial for public that Mayor Faulconer instead of talking about "DNA of a Transparent Local Government" , spend his time and energy to take care of the "Irresponsible Managers" , such as James Nagelvoort, and "Unwritten Policies" against the "Public" and "Public Records" in The City of San Diego. Without any doubt managers such as "James Nagelvoort" , is bigger than DNA and Mayor Faulconer can see him.

Dorian... Another example of "Unlawful Practice" of the City of San Diego:

Managers/Supervisors in the City are "Sensitive" about "Sharing Safety Information" with Citizens. As a former employee of the City of San Diego, it was CLARIFIED for me for Multiple times that "NOTHING" in regards to any "Hazardous/Unsafe" conditions should be SHARED with Citizens "EVEN IF" there was a possibility of "HARM" and "INJURY" for the Citizen. This was a "RED LINE" for an employee in The City. As some examples please see the PICTURES of the EMAILS in this comment.

In April 2013, one of residents of San Diego sent an email to The City asking for recommendation for a situation which was occurred for him during construction. I was AWARE (Per my observations and other's Experience/ Observations) that the Situation could potentially be Hazardous/Unsafe. I notified the resident by email and clarified the situation for him. As a result of my email,I received an ITEM in a "WRITTEN REPRIMAND" 3 weeks later, because I had passed the "RED LINE".

See some recommendation by Section Head , LISA ADAMS, in the emails as:

"This is why we do not want the private citizen’s email on the internal emails. (I know you understand this)" (Lisa Adams's Statement)

Unfortunately, this is an ESTABLISHED UNWRITTEN POLICY by MANAGERS in The City of San Diego against The Public and "Public Record".

One of the "IRRESPONSIBLE" managers in The City of San Diego who is "Supportive" of this unlawful practice/policy is "JAMES NAGELVOORT" , DIRECTOR OF THE CITY OF SAN DIEGO PUBLIC WORKS DEPARTMENT.

Without ANY DOUBT , The City of San Diego is "RESPONSIBLE" for any "INJURY/DAMAGE/DEATH" to the Public as a result of this unlawful Practice/Policy. 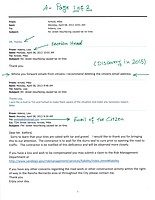 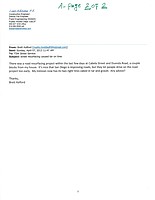 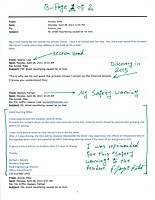 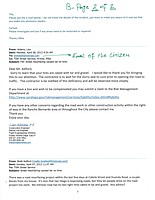