This mainstream article a year says it all. OVER HALF of the 2 million IMMIGRANTS pouring into the USA every year are on the dole. That's just the legal ones, not counting the 30 million+ illegals working the system,

I have compassion for refugees from war torn countries, especially if it's the Zionist Neocon War machine (Vietnam, Iraq, Afghanistan, soon to be Syria and Iran) that is pulling the trigger. But the U.S. can't be the life raft for half the world or we will go down with the ship.

Even under Sadam in Iraq the Christians where a protected group. America is doing Israel's dirty work (as usual) they are about extinct. Remember the infamous quote by Zionist jew Madeleine Albright..

Under Obama the level of Muslim refugees, was at about 96%, which is quite obviously being used in Europe( now the U.S.) by Geroge soros, Rothschild family, to destroy the white European culture and create civil unrest, as if you resist your a racist.

The game plan by the New World Order? Destroy what's left of the middle class and divide and conquer the population with race/culture wars which will the population easier to control when they pull the 666 trigger.

It's obviously working, as I have my problems with Trump, especially now after Syria, and soon N Korea. but he does speak some common nationalism sense. 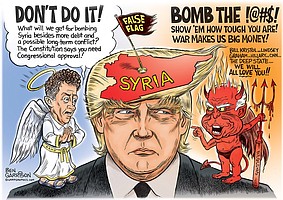