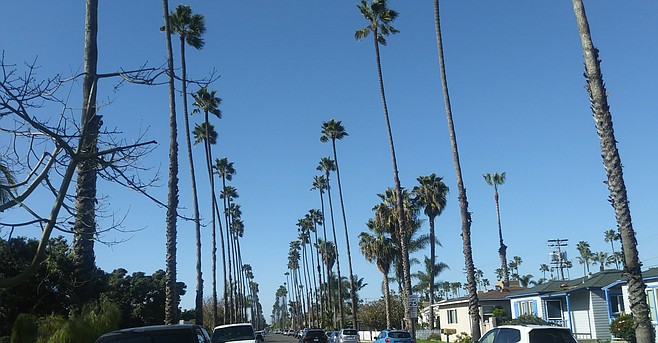 5000 of the non-natives planted near the beach

Enough with the palm trees already!

Joan Bockman is known to many locals as Oceanside’s unofficial Johnny Appleseed for native plants. She celebrates and encourages homeowners who introduce cottonwood or desert willow trees in their front yard.

The former planning commissioner recently chastised the Oceanside city council for approving a new mixed-use downtown project that she says relies too much on Oceanside’s omnipresent invasive plant, the palm tree.

“There are thousands of palms west of I-5, and more are being planted all the time,” says Bockman. ”I ask the city to adopt a proclamation of ‘No new palms.’ This means that for any palm planted, a similar one has to be removed.”

Oceanside’s own tree census shows there are some 5,000 palm trees planted along Coast Highway, the beach-adjacent Pacific Street and on adjoining side streets. Those tall and skinny Mexican fan palms have been Oceanside’s iconic trademark. 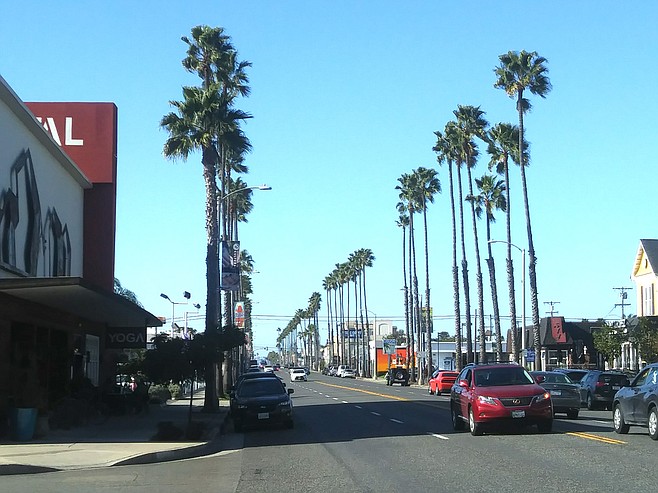 Those tall and skinny Mexican fan palms have been Oceanside’s iconic trademark.

“Palms do not naturally occur on the coast,” says Bockman, president of the Friends of El Corazon group. “There are no towns in California with ‘palm’ in the name, west of Palmdale.” She says palm trees often pop up uninvited. “In downtown Oceanside we are forced to have palms in every single yard. This is due to previous owners, street trees, or the incredibly invasive nature of Mexican fan palms and Canary Island phoenix palms.”

In addressing the council, Bockman quoted sources saying that canopy trees that provide shade are much better than the trees that provide no shade like palm trees. Common complaints over palms is that they get messy when they go through their flower/fruit/seed cycle, and according to some, can be dangerous when their fronds fall, and have the same “Pencils with heads” aesthetic as telephone poles. 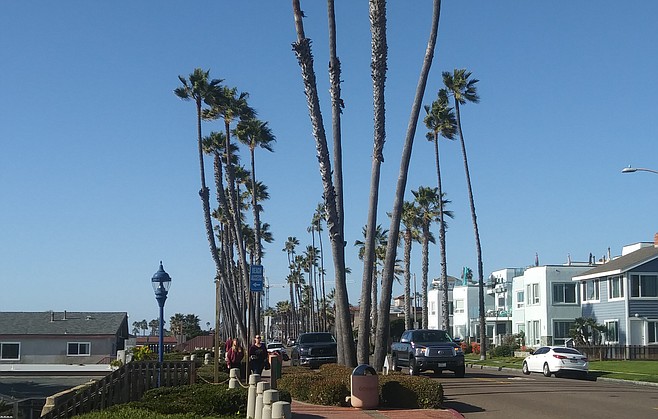 “Palms do not naturally occur on the coast.”

“Visitors see this incredible skyline of palm trees,” says longtime resident John Daley. “But to the rest of us who have been here for five or 50 years, all you see is a bunch of fence posts along Coast Highway. And if you don’t trim them, a falling palm frond can really hurt you.”

The city of Oceanside’s full-time arborist Mark Garlock says that he hires crews that must trim the palm trees once a year, as opposed to other species of trees that only need to be groomed every three or four years.

“Palms are dangerous,” maintains Bockman. “Crews have to actually climb out of the bucket and onto the tree to prune the top. This is not OK. We also don’t know much about what happens when a pampered garden palm gets too tall. Does it fall down? We could be at risk and no one has the answer.”

Arborist Garlock admits that a day of reckoning is coming for a few Oceanside palm trees that have grown too tall. He says that trimming crews have equipment that only allows them to go to 90 feet high. Garlock says those trees that have reached that height will have to be taken out in the next few years. 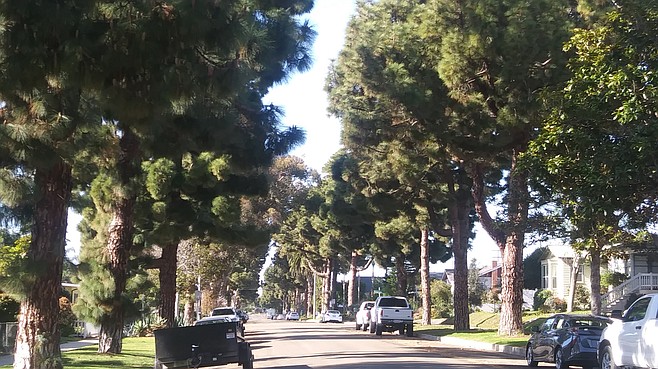 He says some of Oceanside’s Coast Highway palms are 70 years old.

Garlock says that most California coastal cities north of San Diego County employ a full-time arborist. He says that arborists are acknowledging the urban benefits of trees that have broad canopies.

He says that Oceanside, in cooperation with San Diego Gas and Electric removed Mexican fan palms in the Tri-City and Libby Lake neighborhoods because they threatened to impact power lines. Garlock says the city turned to canopy-producing species like African sumac, gold medallion and crepe myrtle to replace the fallen palms.

Kyle Krahel, chair of the Oceanside planning commission, admits that Oceanside’s climate action plan does call for more shade-yielding trees over palm trees. But he says that but that the city council ends up approving developments that are “counter productive,” and in fact do not promote trees with shade over palm trees.

Bockman encourages homeowners to look into native trees like sycamore, torrey pines, western redbud and palo verde. “To see the invasive of palms look at Loma Alta Creek southeast of the Rancho del Oro and Oceanside Boulevard corner. We have over 30 [invasive] phoenix palms in the Buena Vista Lagoon. The tiny little parking lot in front of the Cream of the Crop [store in South Oceanside] has seven volunteer palms in there. Why should anyone pay to remove them? They should not be there at all.”

I like palm trees. They're also one of the few (if not the only) tree that isn't a pain in the butt to maintain. When's the last time a neighbor complained that palm tree branches fell into their backyard pool? Palm trees are the norm in Southern CA. Get over it.

Unfortunately FAN palms ARE a pain in the butt to maintain, if you maintain them annually, and they can be deadly if you don't. They build up heavy skirts of dead fronds if not trimmed regularly and when they finally do get trimmed they can kill tree trimmers if a mass of the frond-build-up comes loose and falls on the worker and crushes him while in the top of the tree trying to trim the over size mass of fronds. (Just google "tree trimmer killed by palm fronds".) These are needless deaths. Fan Palms are not worth the loss of life.

The Mexican fan palms only look good when they are shorter than five feet. I've had to remove (or pay to have removed) four of the things over the past years. They grow tall, and then provide no shade. There are other palms which don't seem to be as obnoxious, those the nurseries call queen palms, king palms and emperor palms. But even though they don't grow so tall and shadeless also get too big and require removal. A few years ago while walking on Pacific Street in Oceanside I was struck by a falling palm frond. So they do pose a danger. We have a next door neighbor who went palm crazy a long time ago. Now we have fronds and kernels falling into the garden from his tree every year. The fronds are heavy enough to break the fence boards. Glad we've never been there when they fell on us or on our heads. The total picture is that, even though palms look sexy and tropical, palms are bad news and planting them is short-sighted.

Is a "tike"torch the same thing as a tiki torch? The 5,000 figure is the number given to me by the city. I assume it is not exactly 5,000. Is that ok Mike Murphy? If a palm tree is in fact not a tree, does that mean the Oceanside arborist does not have to trim it?

I found two spellings for "tike/tiki". And it does make a difference to firefighters.

In doing this story I discovered Oceanside actually has two official trees. They are the Coast Live Oak and the Gold Medallion.

Erin Edwards: The only ones talking seriously about tearing out palms is the city after they reach 90 feet tall. Then they have no choice do to public safety.

Make that "due to" public safety

We do need more living plants and trees, but with the limited planting space in most city areas we need to get the most benefit we can with every square foot of planting space. To do that we need the huge leaf surface area that a canopy shade tree provides for air filtration, Co2 absorption and O2 production. Tall skinny fan palms don't have but a tiny fraction of that surface area. Replacing the palms with shade trees (not just removing them) would be the most beneficial. Other cities have their iconic trees (La Jolla has their Torrey Pines). Oceanside needs a better iconic tree.

Take down the Eucalyptus trees too! Eucalypti?