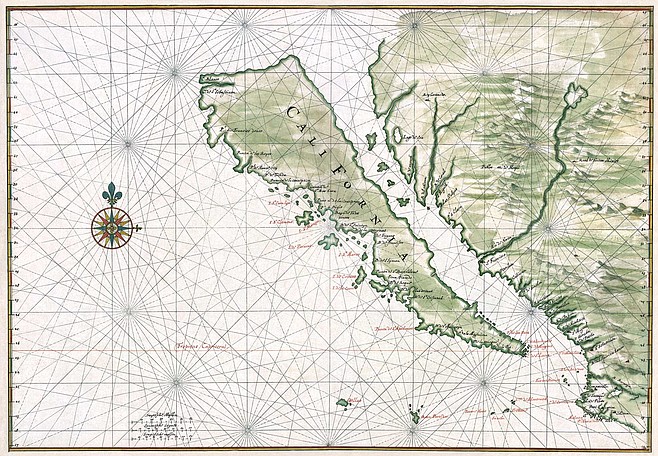 It had been sixty years since the natives who lived along San Diego Bay had seen Spanish ships. It was unlikely that anyone who’d witnessed Juan Cabrillo’s arrival in 1542 would’ve been around to see Sebastian Vizcaino’s ships when they landed in 1602. But the stories about the strange white men with fine clothing and pointy beards had been passed down, and because of that, the meeting between Vizcaino’s men and the natives passed without bloodshed.

The Vizcaino expedition was anchored in San Diego Bay for ten full days. During that time, the sailors measured the bay’s depth, cleaned the bottoms of their ships, gathered fresh food and water, and had many constructive meetings with the natives. 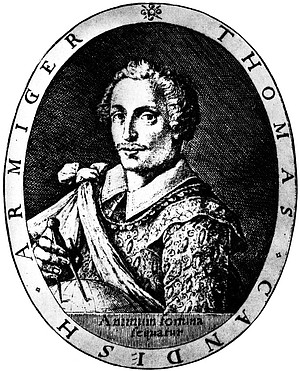 Thomas Cavendish was an English privateer who followed the example set by his famous predecessor, Sir Francis Drake, by sacking Spanish settlements up and down the Pacific coast.

The daily activities were recorded in Vizcaino’s official log, and also in a journal kept by Fray Antonio de la Ascensión — one of three friars who accompanied the expedition. And it was in this journal that an exchange was recorded which has perplexed historians for centuries.

Through sign language and by example, the natives conveyed that they held these men in high esteem. They showed the Spaniards some heavy blue stones that the men had given them, which the natives ground into powder and then applied to their faces as a decorative blue pigment.

But when the enthusiastic natives offered to take Vizcaino’s party to meet these other white men, Vizcaino refused.

Fray Ascensión wrote that the other white men may have been English or Dutch — in other words, pirates — and Vizcaino had compelling reasons for avoiding them.

Fifteen years earlier, near Cabo San Lucas, the galleon which Vizcaino was aboard had been attacked by English pirates. The pirates were led by Thomas Cavendish. Cavendish was an English privateer who followed the example set by his famous predecessor, Sir Francis Drake, by sacking Spanish settlements up and down the Pacific coast.

While sailing north along the coast of Mexico, Cavendish learned that an enormous Spanish galleon was due back from Manila. Cavendish concealed his two ships just east of Cabo and waited. A short time later, his men saw the galleon approaching and they attacked the 600-ton ship, which was loaded to the gunwales with exotic cargo from Asia.

The galleon was named the Santa Ana, and its cannons had been removed to provide more space for cargo. With no means of defending his ship, the captain of the vessel was forced to surrender. Cavendish boarded the ship and ordered its passengers — including Vizcaino — to be ferried to shore. Then he and his men transferred as much of the galleon’s cargo as Cavendish’s two small ships could carry.

The Colorado River occasionally flowed through Laguna Salada on its way south to the Sea of Cortez. The area is shown here during dry times on the left and wet times on the right.

When his ships were fully loaded, Cavendish set the galleon on fire and departed. He was rich beyond measure, and would be knighted by Queen Elizabeth upon his return to England.

Cavendish had left Cabo San Lucas with two ships, but only one, the Desire, arrived safely back in England. His smaller ship, Content, vanished entirely and was never seen again.

Some speculated that the crew of the Content had sailed north in order to return to England as quickly as possible. Maps from that period prove that many mariners believed California to be an island, and that a ship could sail north up the Sea of Cortez, then up behind California through the "Strait of Anian" and then east to the North Atlantic via the Northwest Passage.

If the crew of the Content had gone that way they wouldn't have made it far. The small ship was heavily loaded and may have become stuck in the shallow bottom at the mouth of the Colorado, or somewhere in Laguna Salada.

But the crew of the Content were well-provisioned. They were hearty, well- armed, and could have survived by trading the exotic merchandise they'd stolen from the galleon with the local natives. The exotic nature of that merchandise - copper, silk, china, fragrance, and colorful textiles would've been a hit with Native Americans who'd never seen anything like it.

Three hundred and sixty-six years passed. Then in 1968, The Imperial Valley Press ran a full-page article about a local archaeologist who had made a startling discovery. Morlin Childers found evidence that a large vessel was sunk beneath the alkaline surface of Laguna Salada — a 37-mile long dry lake west of Mexicali in northern Baja California.

Two photographs accompanied the article. The first showed Childers standing on the left side of a large bowsprit which protruded upward, out of the dry lake. Two men on Childers’ right, Jim Atkins and Jim Bailey, were shown shoving a long pole down into the crusty surface — trying to determine how far down the remainder of the ship was.

The second photograph was taken later. It shows Mr. Childers holding a heavy piece of metal rigging that had been removed from the bowsprit. Besides that souvenir, Childers and his men left the sunken ship exactly as they’d found it. Less than a year later, the sunken ship’s location was lost forever when someone cut the bowsprit down and used it as firewood.

Except for the heavy metal rigging no other evidence was collected that would prove the ship had once belonged to Thomas Cavendish. But the possibility does exist — and if a metallurgist were able to personally examine the metal rigging it might help to determine the provenance of the sunken vessel.

After his death in 1987, Childers’ collection was donated to the University of Las Vegas, where it sat in storage for over 20 years. At some point, the collection was transferred to the Bureau of Land Management.

Then in 2015, most of his collection was relocated to the Imperial Valley Desert Museum in Ocotillo, and since its return the collection has been the focus of almost continuous research.

Students from the San Diego State University Imperial Valley Campus, as well as visiting archaeologists and anthropologists, have come to the Imperial Valley Desert Museum to sort, study, and analyze a collection that fills over 130 storage boxes.

Although the heavy metal rigging from the sunken vessel has yet to be found, museum director Dr. David Breeckner says the collection represents a unique opportunity to better understand the early history of the region.

However, the curation process has been slowed by a lack of funding. Dr. Breeckner is asking for the public’s help in order to make this unparalleled collection available for everyone to study, learn from, and experience.

The Imperial Valley Desert Museum is open Wednesday through Sunday and is located at 11 Frontage Road, Ocotillo CA 92259. (760) 358-7016. www.ivdesertmuseum.org.