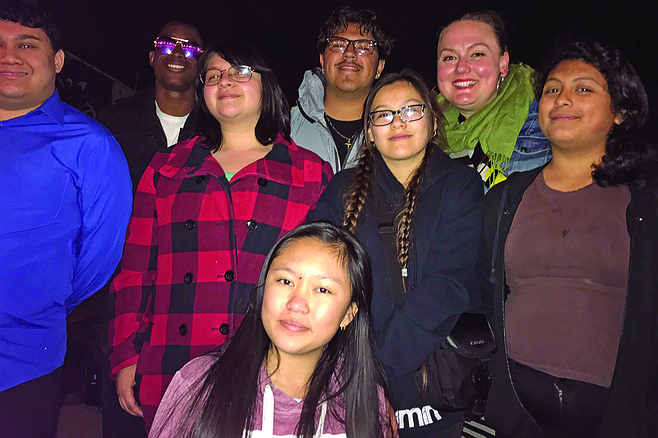 “I want our kids to be curious, not fearful.”

It’s a shivery night here in Barrio Logan. I’ve just come across these kids huddling with Anishka Lee-Skorepa in an empty lot often used for markets and performances. A small crowd waits on the sidewalk. Anishka talks to her kids — maybe a dozen — earnestly, then brings out a little tabor and starts beating it.

“We are the Cardinal Songbirds,” they sing, first in English, then in Spanish. “We are here to sing for you.” But it’s not cheerleader stuff. It sounds more like a medieval round and chant. They end. Anishka hits a tuning fork against her temple, points it at her ear, and sings the home note. I notice what a beautiful voice she has.

“They call me the dark one, Llorona, dark yet loving.”

They are singing in the Zapatec language. The song is what may be Latin America’s most famous love song, “La Llorona (The Weeping Woman).” “The wind howling is La Llorona calling for her children.” They have especially learned the lyrics in Zapoteco, the language of a million people around Oaxaca in southern Mexico.

“Why not?” says Anishka. “Zapateco people love this song too. I want our kids to be curious, not fearful.”

These are students from Hoover High School, here to perform at this Thursday night Barrio street gathering. Three of them, Yeseña, Cruz and Afolabi, are singing solo, in a language none of them know. Yet you can see it means something to them.

Anishka turns out to be a classical singer herself, with ten years at the San Diego Opera, and a master’s degree in music. But she says what gets her up in the mornings is using art to melt away the prejudices of the border. “The border is our country,” she says. “These kids feel the connection with their other cultures. It’s visceral. You can see it in their faces.”

You can hear it in her voice, too. “I was born and raised in San Diego, but my parents made a point of growing me up multiculturally,” she says. “These days, people think of the border as a war zone. The deeper you go into the United States, the more intensely they believe it.”

To counter this, Anishka has become deeply involved with cross-border artists. She has sung with the Orquestra de Baja California, and formed a group, Artistas Fronterizas. “We are three women, a Ukrainian pianist, a mezzo-soprano from the state of Puebla, and me. We have toured the Bay Area, Pueblo, Texcoco, San Diego, Tijuana. We sing everything from Wagner to Rossini to stories we compose about border life.”

At the end of “La Llorosa,” Anishka pings her tuning fork again. Their final song, “We are Marching in the Light of the World,” sounds African.

“The beauty of a choir like this,” she says, “is we get a sense of family, of creative community. We’re a small, voluntary, after-school group. We sing a cappella. The kids are here because they want to be. It’s a feeling every teacher craves.”

How lovely and very impressive! I hope to hear it in person.