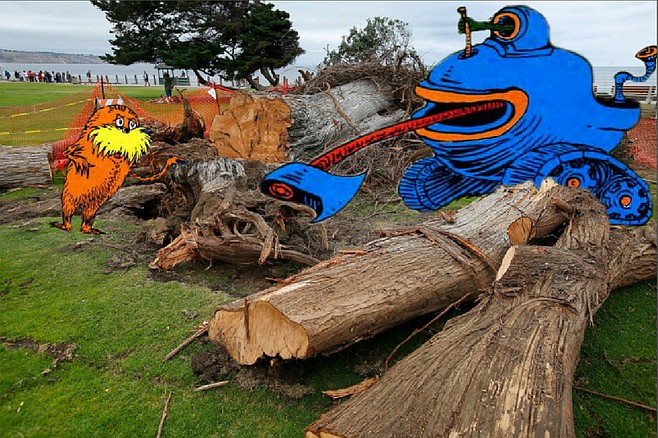 The Once(ler) and Future King

In the town of La Jolla, at the edge of Scripps Park

Grew a Monterey Cypress, full of sap, leaves, and bark.

A healthy old tree, and quite famous to boot

Since it helped Dr. Seuss make a boatload of loot.

That tree and no other was fluffy enough

To start the Doc thinking of something called Truff-

ula — yes! What an excellent name!

(He asked his friend Lorax, and he thought the same.)

And in no time at all, he’d published a tale

That made the old Onceler look destined to fail.

A mismanaged market, a finite supply

A fiasco to blame on a self-centered guy.

But fifty years later, the truth can be told

Old bosses don’t fail, they don’t even get old!

The tree was a relic, its race had been run

Once Seuss made his money, its work was all done.

UNLESS, I surmised — and my thinking was sound —

UNLESS some new path to a profit was found.

And that’s why I felled it, and chopped it in chunks

Into branches, and twigs, even slices of trunks.

The tree from the plea to keep old Earth alive

There is spirited discussion happening at La Jolla Parks and Beaches advisory group about "re-purposing" the wood salvaged from this tree. One person actually suggested carving it into a breaching whale in situ.