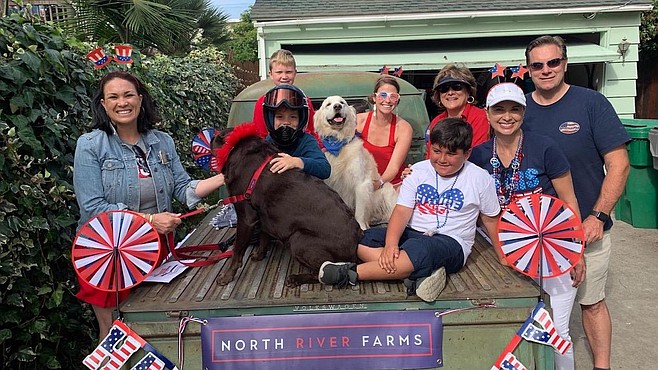 North River Farms not giving up on Oceanside

I need your support,” Oceanside City Councilman Christopher Rodriguez said in a June 29 Facebook post. The first-year councilman was not after votes or promoting a favorite charity. He was trying to sell the controversial North River Farms project which would place 656 homes on 115 acres which is currently used mostly for farming.

Elected officials generally do not disclose how they will vote on a project before it comes to them for a vote. Rodriguez not only showed his hand on the upcoming vote, he is now rallying support for North River Farms, a planned community proposed by Integral Communities of Encinitas.

“It’s just wrong,” says former councilwoman Shari Mackin. “It shows he’s already made up his mind. He is sold on all the pretty pictures [provided by Integral]. Something as controversial as this needs to be vetted in public.”

“You appear to be acting as a promoter for the NRF proposal,” commented Arleen Hammerschmidt, who regularly speaks at Oceanside council meetings.

After being twice turned down by the Planning Commission and rejected by the city planning staff, the massive project was headed for a vote before the City Council May 22. Facing imminent rejection, on the day before the vote Integral project manager Ninia Hammond posted on line that the vote at the council meeting was postponed. That means Integral had secured three council votes to postpone the project. This allows Integral to scale back and modify the project and bring it back again for approval.

Among those speaking against the delay was former Assemblyman and Oceanside City Councilman Rocky Chavez who made his first appearance at a city council meeting in nine years. He has told some he is running for Oceanside mayor next year. “Have this vote tonight and put it to bed,” Chavez told the council.

There is no date when Integral will bring back the proposal. And Hammond did not disclose what the specific changes would be or if the number of homes would be reduced. But councilman Rodriguez says he knows what the changes are and that is why he now supports North River Farms.

Insiders say Integral has scrapped plans for a North River Farms boutique hotel. In an email Hammond said, “…we are now taking a look at alternative uses in the village core such as a restaurant/brewery and retail opportunities.” She declined to get more specific but did say North River Farms was destined to come back.

The North River Farms project includes biking and hiking trails, a dog park, open space and agritourism attractions. But it is the housing on land that is currently zoned agricultural that draws loud and testy crowds every time it is discussed in open forums.

Integral is trying to win public favor. Integral Communities, which has an office in Encinitas and is the 12th largest U.S. home builder, was a co-sponsor of Oceanside’s Independence Day Parade June 29..

“It’s disgusting,” opines former councilwoman Mackin. “They are trying to buy a town just like [developer Doug] Manchester when he tried to come here. He gave money to civic groups and put signs on the back of city trucks that said ‘Manchester cares about Oceanside…ride our wave.’ We now have a developer-happy council. Developers put councilmembers in office and then the sharks just come on in.”

Integral and other developers contributed heavily to the $1.4-million fund to defeat last November’s co-called Save Open-space and Agricultural Resources initiative which, if passed, would have mandated that any plan to convert farmland to residential use would have to be approved by a vote of the people.

Councilmember Rodriguez did not respond to a request for comment for this article. But some of his reasons he listed for support include the fact that Integral will pay for the construction of a new fire station and a stronger tax base.

Mackin wasn’t buying it. “These developers just want to push Orange County down our throats.”

Oceanside Planning Commission chairman Kyle Krahel says that even though Integral is stressing the agritourism component, his board unanimously rejected North River Farms partly because it is nothing but urban sprawl. “We need more housing but that is not the place for it. Oceanside is known as a city where developers are known to have a chokehold on the city. But the community has fought back, and that is why we have all the toxicity we’re also known for.”

Krahel says North River Farms would worsen Oceanside’s already overwhelmed roadways, and that if a fire like the one that plagued nearby Bonsall/Fallbrook in 2017 were to return, North River Farms could create a death trap. “Hundreds of people living in existing homes in South Morro Hills could be stuck in their homes in the case of a wildfire evacuation.”

Rodriguez says the new development would help traffic because Integral would pay for the widening of a bridge at College and Vandergrift Boulevards.

This level of overt involvement by Rodriguez in the campaign is totally out-of-line. He should/must recuse himself from the vote on approval. Once he became a campaigner for the developer, he forfeited his right to vote on it. I don't think I've ever heard of a city councilman going to such lengths to secure approval of a proposal outside of a council meeting. Well, at least in No County--in So County, . . . (His actions may violate the Brown Act.) But in Oceanside, anything can happen.

Maybe, as a first year dumbo councilman, he was never told about conflict-of-interest rules. There have been many fixes on votes from time to time, but parading them publicly this way is unheard of, at least for me. He's left the developer open to more lawsuits about undue influence, and may have cost himself his seat on the council.

This latest fiasco on Wednesday has everyone in an uproar when Integral Communities had Solutions For Change stack the city council meeting by busing in their clients at 3:00PM to take up seats before everyone had a chance to get off of work. I've never seen such a backlash against both Chris Megison and Christopher Ryan Rodriguez. 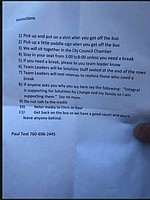 Solutions for Change Instructions for attending the 11/6/2019 city council meeting which was to vote on the North River Farms project.

I had a few email discussions with the city attorney about the announcement the day before from Integral that the vote the next day was going to be postponed. I thought it smelled like a Brown Act violation. And although he said it was unfortunate, he explained that it did not mean the three council members were colluding with each other. But as some observors pointed out, it might show these three are in the back pocket of Integral and will do whatever Integral says.

Councilmember Christopher Rodriguez got back after I had turned in the article. He said the reason he did not get back to my request seeking comment was because he was in the hospital all day since 5 am with his wife who was giving birth to a new baby girl. She is beautiful and I assume healthy.