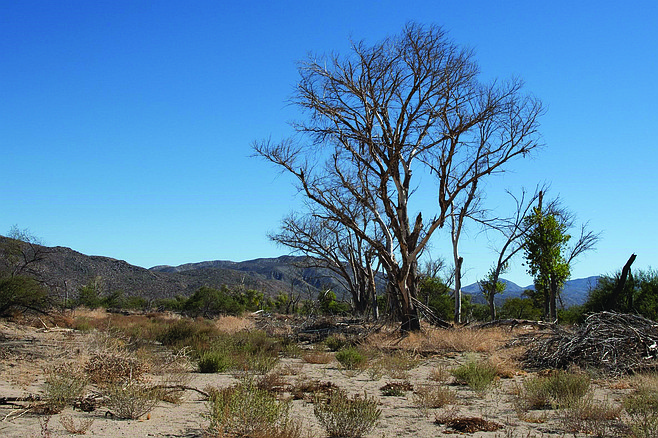 The Birding Trail was established at a time when San Felipe Creek discharged into a large wetland, or cienega, with intermittent pools of open water. It was an important stop for migratory birds. The pools of open water have vanished in these recent dry years, so you are unlikely to view migratory waterfowl from the birding trail. However, numerous smaller birds that enjoy the shelter provided by the mesquite (Prosopis glandulosa) thickets found here are available for viewing from this short trail.

Start hiking north from the S-2 on the Pacific Crest Trail. As you descend the gentle hill on the PCT, shortly before you reach San Felipe Wash, look for a faded sign on your right for the Sentenac Birding Trail. The Birding Trail leads east from this sign, almost parallel to, but below and separated from the S-2 highway. It is marked by intermittent posts with small white signs or arrows. The trail isn’t well maintained, so it requires some maneuvering around or through various obstacles. Initially, these include dead or dying mesquite trees, but within a quarter of a mile, you begin to encounter living mesquite trees, more evenly spaced and usually easy to detour around. At about 1.2 miles from the trailhead, you will find it very difficult to find a way around the mesquite now blocking the path, so it’s a good place to turn around.

But if you came to see birds, here is the place to stop hiking and remain, quietly observing the brush for signs of activity. Birds that have been seen here include Bewick’s wren, Wilson’s warbler, the lesser goldfinch, black-tailed gnatcatcher, the common yellowthroat, mourning doves, bushtits, and red-tailed hawks. You are most likely to see some or all of these species in the spring or fall.

You might also see a brown-headed cowbird, which is known to parasitize the nests of other birds. They are still occasionally seen in the spring, but their numbers are declining due to a successful effort to trap and destroy them. One such trap was set up near the Birding Trail.

If you have time and want to see the Sentenac Cienega, it is still here — just shrunken from what it was. There is no marked trail leading to it, but if you continue up the PCT, just after passing the Hwy-78 bridge crossing San Felipe Creek bed, look for a signed “Nature Trail” off to the right, near a gap in the fence. Follow this down to the San Felipe Wash, then continue hiking east along the wash. At first you will see scattered dead and dying mesquite and cottonwood (Populus fremontii) trees, but as you continue, you will see more signs of life. in individuals of both of these species. They also become more numerous. After about 0.75 mile, the wash spreads out and becomes less distinct as it enters a grassland with scattered trees. Turn in a northeasterly direction, hiking toward the thicket of trees ahead: willows, cottonwoods, and mesquite. These trees have found water and also have created an impenetrable barrier making this a good place to turn back. 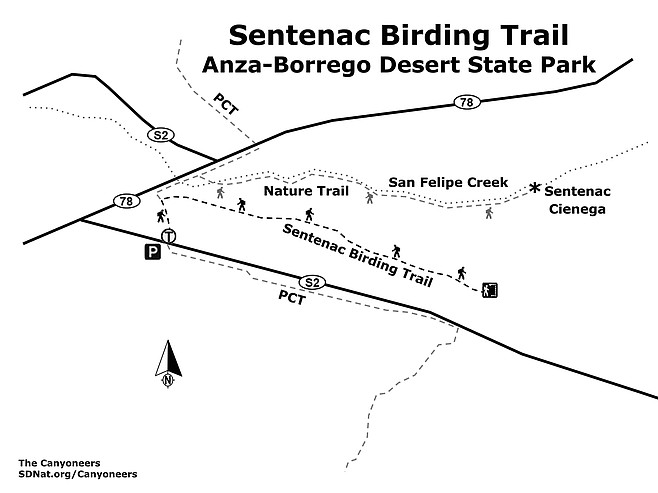