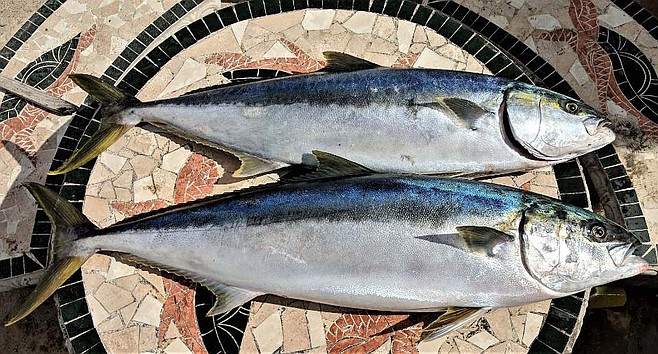 Know your limits while fishing off Baja

The Pacific Queen returned with bag limits of 58 yellowtail, 260 rockfish.

Saltwater: Another week of mixed weather kept the angler and trip counts down, though again, when boats did get out they did well on rockfish, sculpin and sand bass. The better rockfish counts have been coming from for the 1.5 day trips south of the border along the Baja coast. While the water temperature in the San Diego area have been averaging a cool 58 to 60 degrees, further south has been 62 to 66 degrees from Punta Banda to the transitional zone about mid-peninsula, resulting in good yellowtail fishing along that stretch.

Fishing guru and tin-boater Ross Zoerhof reported two yellows at 35 and 45 pounds and released several others while fishing in the Bahia Asunción area, where the weather has been better as the frequent storms have been moving through to the north. For the San Diego-based boats, the trick is finding a window between fronts so they can get to the fish. The Pacific Queen did so, returning from the Colonet area Saturday, February 9, with bag limits of 58 yellowtail, 260 rockfish, and 2 lingcod for the 32 anglers aboard their 1.5 day trip.

That trip brings a point to mind: Mexican limits while fishing south of the border. 320 fish caught for 32 anglers is correct, depending on individual species counts. While fishing in Mexican waters there is a daily bag limit of ten fish per angler. A 2-day trip can take two daily bag limits, but 1.5 day trip cannot take 1.5 times the limit. There is a five fish per species daily limit on all fish other than bluefin tuna (2), dorado (2), billfish, including marlin and sailfish (1), sharks (1), and giant seabass (1). Each of these exceptions count as five fish toward the daily bag limit.

I noticed that there are times when the rockfish limits are not listed correctly in the counts as most boats do not separate all species of rockfish. If reporting 175 rockfish and 125 vermilion rockfish for 30 anglers, they are actually over limits on paper for the rockfish column. Therein lies the crux, rockfish can include different species, so noting each species might be wise to avoid looking like over limits were taken. If 15 yellowtail, 1 shark, 2 bluefin, and 2 halibut were added to the hypothetical count, then twenty seven fewer other species of fish can be taken, but only if the 2 bluefin were caught by the same angler. The sportfishing boats tend to run on boat limits which can reflect a correct overall count while, for instance, if the two bluefin were caught by two different anglers, they would be over daily bag limits by five fish.

The Pacific Queen’s count on rockfish was 110 red, or vermilion rockfish, and 150 other rockfish; both are within species limits, and their total count including the pair of lingcod and 58 yellowtail brings a total of 320 fish for 32 anglers. The individual species counts were all below the limit, but the total allows that their fishing day is done based on the bag limit of ten fish per angler. While fishing aboard a sportfishing vessel out of a San Diego-based landing you are going to be okay as they know the rules and adhere to them. For private boaters fishing in Mexican waters, knowing the exact regulations can be very important, and save a lot of time, grief, and money if checked by Mexican authorities.