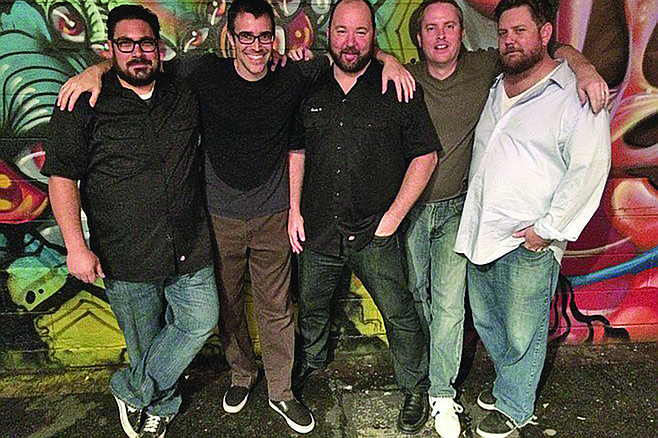 “I think the last show I played in Lemon Grove was a place called the Pelican Pub a million years ago and, prior to that, an all ages venue called Mesopotamia,” says Manganista singer-percussionist Matt Rhea. “However, a couple of friends of mine just opened up Lemon Grove’s first brewery called 13 Point Brewing, they’re also going to be a music venue, and Manganista is playing their first band night on February 8.”

Operators Bob and Dylan Frank and brewer Robert Bessone, all graduates of SDSU’s Business of Craft Beer certificate program, have said the venue’s goal is to be a brewery with a focus on live original music. “The 13 Point guys are Grateful Dead fans, so the name comes from the 13-point Grateful Dead lightning bolt,” says Rhea. “I think they plan on having one or two shows a week once they’re fully up and running.”

For the debut band night, “We’ll be doing mostly tunes from our latest and upcoming records, but have a couple of covers lined up too. Maybe we’ll try to throw in something from an older album, if we can remember how to play any of that stuff. We’re playing with a band called Space Force, which I’ve been told is a fake name and the band is really another band that we’ve played with many times before.” Food will be provided by Charlie’s BBQ. Upcoming shows include Landis on March 2.

It may seem an odd neighborhood to be launching a new music venue, let alone a brewery, given the lack of similar nearby businesses. “It’s hard to say if Lemon Grove will follow in the footsteps of what seems to be happening in La Mesa’s village area and 3rd Avenue in Chula Vista. All I know is that 13 Point isn’t even officially open yet, they’re ‘soft’ until their opening on February 8, and there’s already a steady stream of people coming in, even on weeknights.”

“I guess ‘if you build it, they will come,’ especially if what you’re building serves beer.”

So, if the operators are such Deadheads, what are the odds of seeing Manganista playing a Dead tribute set? "Probably not in Manga’s wheelhouse, but we could probably muster up one or two Dead covers if they ever wanted to do a Dead night with a bunch of bands...a bunch of my friends and I kind of went through a jam band phase around the end of high school, so I ended up seeing the Dead once and Jerry a couple of times. Some of our high school buddies formed a Dead influenced band called Keith Mahoogan."

“I remember seeing their Spirit Club show advertised in the Reader, and couldn’t believe I actually knew people in a band that were good enough to be in a newspaper.”

In other band news, “We’re finishing up a new record called Hillbilly Bomb Shelter that will be released later in the year. Lance [LaFave] from Warsaw recorded it at K Street studio before he moved to Germany. Right now, we’re dropboxing mixes back and forth and hope to have the mixing wrapped up in the next month or so.”

Right next door is Chef John's Fish & Chips. I think if they let customers bring over fish & chips to eat with their beer it would be fantastic. Chef John's makes some of the best English style fish & chips in the county.

13 Point definitely let's you bring food in, in fact they encourage it. They're big supporters of local Lemon Grove businesses.