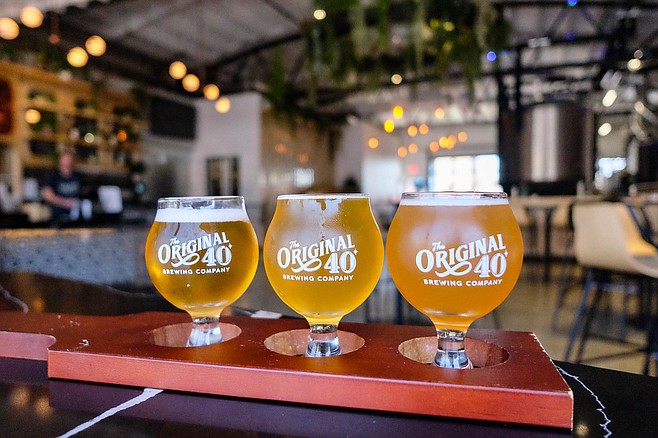 The Original 40 raises the brewpub game

Sales, production, and the proliferation of satellite tasting rooms may be on the rise in San Diego, but at least one aspect of the local brewery industry has slowed down considerably: new brewery openings. We’re only a short time removed from a time when two dozen new breweries would launch each year. In the first half of 2019, there were two. And they don’t even remotely resemble the industrial park breweries of old.

The newest generation of brewery business models emphasize the overall customer experience, placing the focus on comfort, dining, and hospitality in addition to beer. In other words, they invest in atmosphere, creating memorable spaces rather than merely relying upon beer quality and alcohol consumption to give visitors a good time. Stone Brewing set this ball rolling nearly two decades ago when it opened is World Bistro and Gardens in Escondido (and later Liberty Station). But the trend has accelerated in recent years with the arrival of slickly designed beer hubs such as North Park Beer Co., Viewpoint Brewing, Gravity Heights, and, though their core liquids aren’t beer, Bivouac Ciderworks.

North Park’s newest brewery, The Original 40 Brewing Company, exemplifies this shift. The brewpub does feature stainless steel brewing vessels in its back corner to remind guests that, yes, the beer is brewed on site. But its interior design otherwise hews to the standards of contemporary urban hospitality. Though literally residing within arch-roofed warehouse space, its outfitted with marble bar tops, rattan lounger chairs, planters dripping with greenery, and tabletops polished to embellish their wood grains. A massive roll up window opens up countertop drinking facing the active University Avenue street life.

It's a far cry from the spartan warehouse taprooms San Diego’s beer scene grew up with. This is the kind of place one might go for brunch, and in fact the restaurant recently initiated brunch service. With regard to food, this new generation of brewpubs takes a step up. The Original 40 kitchen is headed by chef Luke Johnson, recruited from a career in fine dining, who has assembled a bar menu equipped with the likes of charcuterie, mussels, and aguachile in addition to burgers and traditional pub fare.

The emergence of this hospitality beer model could almost be seen to diminish the priority on beer, but this hasn’t been the case. The Original 40 invested in a veteran brewer, Chris Gillogily, whose career has included stops at Pizza Port Brewpub Carlsbad, Mikeller Brewing, and Green Flash Brewing. He brings GABF medal-winning stout and brown recipes with him to North Park to pour alongside the expected, San Diego quality IPAs. He employs water filtration system to great effect in a trio of true lagers: a pilsner, helles, and Mexican lager.

The result is a venue casual passersby will enjoy as ardently as hard core beer enthusiasts, and helps raise the bar on what San Diegans might expect from what few new beer businesses might open here.