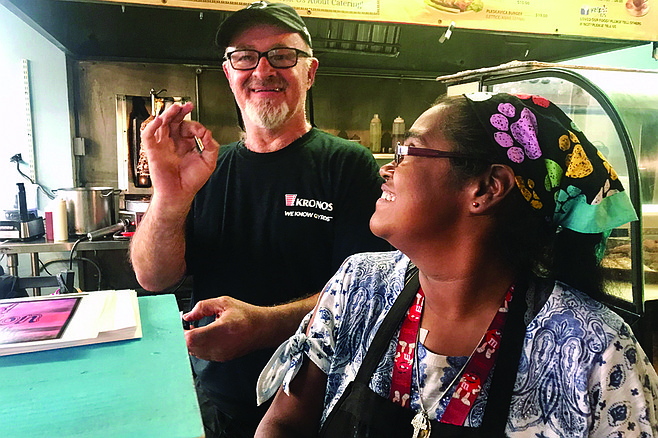 The mural Arslan had painted links the Christian and Moslem communities

‘Let’s have a symposium!” says Annie.

Symposium? Takes me a moment. Then, okay, yeah. Just passing an eatery with huge letters on its sidewalk canopy: “GYROS.” And I remember. Symposium’s the ancient Greek word for a get-together, like, a drinking session. Because Greeks believed one or two libations liberated your ideas.

So why not? Saturday afternoon. We look for parking.

And look for parking. I forgot. This is Mission Beach. 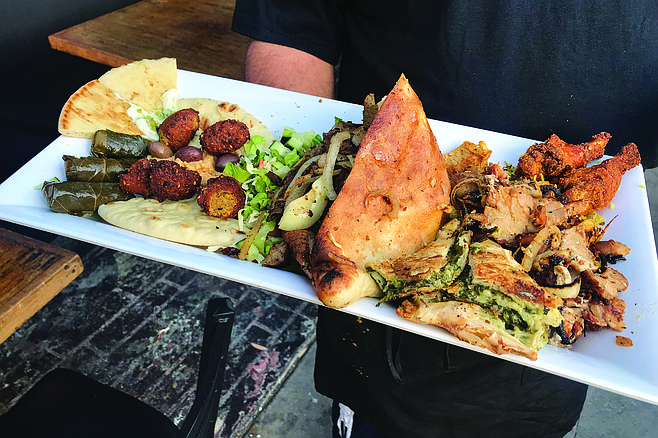 We end up paying five bucks for a fold-yer-Lincoln-and-squeeze-it-through-the-slot place.

“Welcome!” Finally, we’re on this little patio between Toulon Court and Tangiers Street. Sun’s on a nice slant, coming through the row of houses between us and the ocean. I see the place’s name is “Arslan’s Gyros,” and turns out the gent is Arslan himself. Bosnian. “But all food from Greece and the Ottoman Empire places is mainly the same,” he says. “We love lamb and chicken, and eggplant and falafel, and baklava, and our kind of coffee!”

Me, just got paid yesterday, so feeling kinda expansive anyway. Only prob. They don’t have wine or beer. Dang! But the smells coming out of the kitchen are so good, we stay anyway.

The boy and girl next door are munching into pretty big chicken gyros ($12 each). Say they’re good. We go through all the possibilities, mostly gyros (chicken, lamb — on the spit — or beef, of course), falafel (chickpeas and maybe fava beans), vegetarian plates, spanakopita (spinach pie), and Balkan dishes, or a burek (an ancient savory pie).

“I am starving,” says Annie. “Can we have something while we think about it?”

“Of course!” says Arslan. “How about falafel. I’ll get you some falafel.”

I see this “falafel vegetarian sandwich is $8, and is made up of chick peas, garbanzo beans, hummus, salad, grilled onions. and tzatziki, on a pita bread bed. (For two more bucks, you can add fries or rice, and any drink.)

The best deals look like appetizers such as dolmas (rice-stuffed grape leaves), or hummus, olives, and pita bread for $5. Vahida’s Spinach pie ($10), comes with filo dough and feta. Or they have feta cheese with fries for $7. Or the burek pie stuffed with meat, or potatoes, or cheese, costs $10. Or chevapchichi, the Bosnian flatbread folding round lots of little Balkan sausage links is $13, or $19 for a large size. And I spot something I’d love to try, the pleskavica, or “clap hands” burger. It’s called “clap hands,” because that’s what you do to flatten out the combo of ground beef and ground lamb, with curry, olive oil, onions, and maybe hot paprika. Except, well, it’s $19.

“If you’re short on cash, come bargain with me!” says Arslan. “I’m flexible.”

But the basic price for most stuff here seems to be $12, like the price of the different gyros, or the Greek salad. 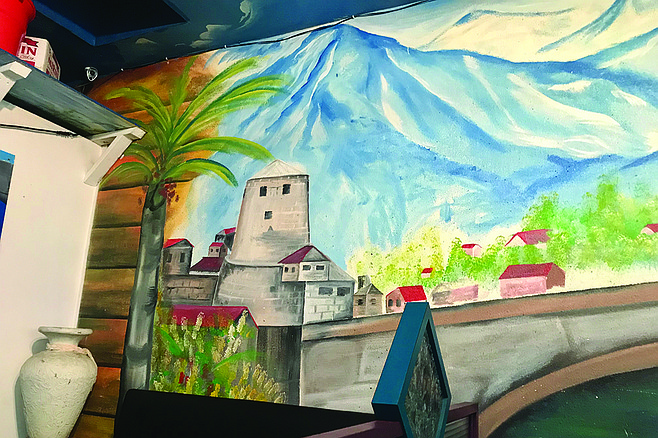 Memories of home: The legendary bridge at Mostar, a mural on Arslan’s wall

“Hey! Symposium!” says Annie. We’re chewing into the falafel balls, which are quite spicy.

“Well, have you seen this?” says Arslan. He points to the “plates” section. “Arslan’s World Surprise Plate.” It shows a picture of a great plate with like everything aboard, from spanakopita to marinated chicken chunks to salad, on and on. Then I see the price, $25 for one, $40 for two.

“Why don’t you get the one but share it?” says Arslan. “Twelve dollars apiece?”

He’s got a point.

And man, oh man. The big long plate-load starts off with dolma and olives and pita at one end and finishes with chicken legs and chunks at the other. In the middle is this mountain of a giant pita stuffed with lamb sliced off the vertical spit. Salad surrounds it, with its own hummus piled on top. On the other side, at least four slices of spanakopita pie, “Vahida’s Spinach Pie.”

“Vahida’s my wife,” Arslan says. “We escaped from Sarajevo with our children.”

Wow, Sarajevo, “the Jerusalem of Europe.” That beautiful multi-religious Bosnian city. And the horrible siege it suffered, 25 years ago.

Annie and I chomp on. The giant pita is slit open to show all the goodies inside. Lamb, onion slices, hummus. And here’s the thing: this lamb is supercalifragilistically delish. It’s not just the garlic, the olive oil. “First, I cook the lamb on the spit,” says Arslan, when I ask. “Then after I slice it off, I put it on the griddle. And I sauté the onions and mix them in with garlic, salt, black pepper, parsley, and cumin. Also, I get lamb that has been fattened a little. More flavor.”

Whatever, it is scrumbo. Even the stuffed grape leaves are interesting. It’s not just rice inside, but bulghur wheat, mint, veggies, vinegar, lemon juice.

Of course, there’s too much food. But meanwhile the symposium takes off. Something about the small space. Something about the people crowding in to get orders. And the influence of Arslan, and the beautiful Annie, who also talks to everyone. And the mural Arslan had painted here, of the ancient bridge in Mostar, Bosnia, which he says links the Christian and Moslem communities and has become a symbol of a new mutual respect. It just all seems to work. You don’t wanna leave. We get a Turkish coffee ($4 each) and sip the wicked sweet, thick liquid while Arslan’s niece Veronica boxes all the remains.

We head out into the evening. It’s suddenly cold. All the cottages and dimly-lit alleyways look just like Mission Beach must have been back in the 1940s. Easy to get lost in time.

Easy to get lost, period.

“Do you remember where I parked the car?” says Annie.