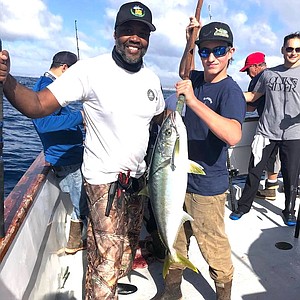 Yellowtail caught on the Grande with yoyo iron

Saltwater: Thanksgiving week featured fewer trips, more anglers, and more action spread across the fishing grounds. With the full moon phase, those trips able to fish bluefin tuna during the afternoon hours did well on the outer banks from the Cortez down to the 60 Mile Bank, as did the Aztec when they returned as the only boat reporting a count on Thursday while most folks were firing up the ovens for turkey, stuffing and pumpkin pie. The 26 anglers aboard scored limits of bluefin tuna (56) along with 18 yellowfin tuna on their 1.75 day run.

Last week, the yellowtail looked to be slowing and the water is cooler, but that didn’t stop the feisty jacks from biting closer to the bottom off Rosarito and the Coronado Islands, as the full-day boats the San Diego and the Grande did well; most anglers opted for either the yoyo iron or a sardine on a dropper loop to get their fish from deeper in the water column. Most of these fish are in the 10- to 15-pound range, with a success rate of one to five per rod. Along with the yellowtail, bonito and rockfish have been filling out the counts for those full day runs just south of the border.

Half-day boats have been concentrating on the rockfish bite on high spots just off the coast and out to the Nine Mile Bank; lots of vermillion, reds and whitefish provided most of the action, while sheephead and a few bonito came over the rails for those fishing close to home. The evening lobster trips slowed a bit in numbers, more than likely due to the stronger currents brought on by the full moon tide swings. The keeper to short ratio was one out of every four bugs raised making the grade.