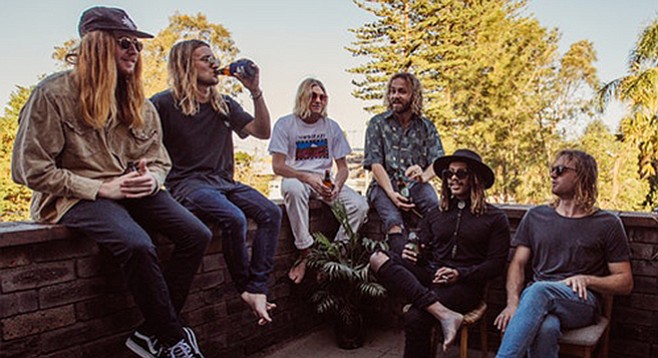 Trashcan Sinatras — the best of Groucho Marx and Tom Lehrer.

Plus Circles Around the Sun, Ariel Pink/Nick Hakim, the Floydians Ocean Alley

Circles Around the Sun 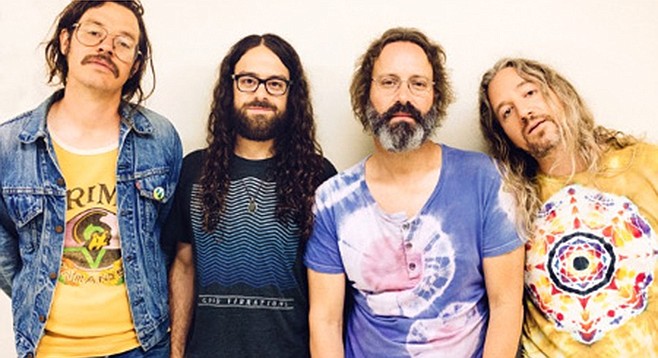 Circles Around the Sun — something new from the Dead sound

Two different types of psychedelic jam bands seem to fancy themselves heir to the devotional horde of Deadheads still willing, even anxious, to rejoin their tie-dyed and squinty-eyed brethren at the electric altar: those who are inspired by, and those who aspire to. The “inspired by” crowd includes locals like Electric Waste Band and Travel Agents, who approach the music of the Dead as a blueprint to follow, sometimes for decades at a time, with little or no deviation. Circles Around the Sun instead aspires to create something new from the basic elements of the Dead sound, using it more as an unfinished roadmap than a blueprint, leading to musical explorations that allow for expansion and improvisation that even actual members of the Dead might find too far-out to fathom. The group was originally founded by Chris Robinson Brotherhood guitarist Neal Casal in order to create an instrumental soundtrack for a short film being created to screen at 2015 concerts by surviving Dead members, directed by the son of Dead drummer Bill Kreutzmann. Casal, who also toured with Dead bassist Phil Lesh, brought in Brotherhood/Lesh keyboardist Adam MacDougall, Beachwood Sparks bassist Dan Horne, and drummer Mark Levy, and the result is a band that, in concert and on their debut album, Interludes For the Dead, is more akin to jazzy prog bands with classical leanings like Spirit and Love than to groups more inclined toward endless note noodling like Phish. With less than two dozen live performances notched to date, the April 6 appearance of Circles Around the Sun at the Belly Up will be an opportunity to catch an adventurous new ensemble right out of the wildest fever dreams of Timothy Leary, Ken Kesey, and the late head Deadhead himself, Jerry Garcia. 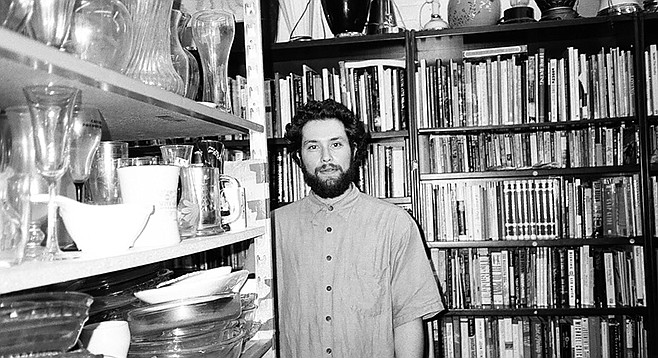 Acid drenched R&B throwback Nick Hakim is still touring in support of his debut release from last year, Green Twins, which sounds like something straight out of a 1970s Blaxploitation movie, but with the echo and reverb turned up to 11. All greasy and grooving, the entire album is drenched in swishy pop keyboards that would be considered “disco” if not juxtaposed against such dreamy midnight movie soundscapes. His South American heritage definitely influences some of the tracks, but there’s a wide mix of regional U.S. inspirations, thanks to time spent living everywhere from Washington D.C. to Boston and Brooklyn NYC., where Green Twins coalesced. One can easily imagine each of those city skylines as backdrop to various selected tracks found on his major label debut. The production’s full-blown depth and sheen could easily have overwhelmed the introspective and personal nature of his songwriting, which was more solo-ish on the earlier self-released EPs that so-impressed the New York Times and NPR (whose Tiny Desk Concert with Hakim is said to be the radio network’s most requested repeat so far this year). As if to remind everyone that he’s still a solo troubadour at heart, 27 year-old Hakim just finished a short tour that found him doing acoustic solo renditions of his debut album. However, it appears he’s bringing his full band to House of Blues on May 6 for this year’s Desert Daze Caravan Tour, which includes DIY retro rocker Ariel Pink and L.A. space-drone trio Jjuujjuu (also playing July 6 at SDSU with Primus). 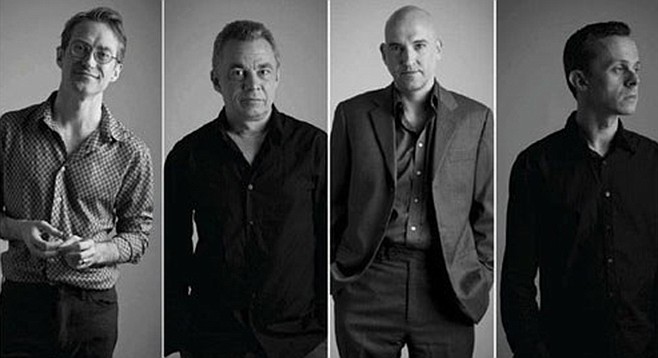 Trashcan Sinatras — not easy to find their next album, which wasn’t even released in America

Pop music is rarely considered clever or pithy, but try telling that to Scottish pranksters the Trashcan Sinatras, whose witty command of language brings to mind the best of Groucho Marx and Tom Lehrer. After being “discovered” playing in a rural pub, the group became unlikely alt-rock heroes in 1990 with the release of Cake, which resulted in their biggest worldwide hit single to date, “Obscurity Knocks,” as well as yielding longtime radio staples like “Circling the Circumference” and “Only Tongue Can Tell.” It took three years, most of them spent touring, to brainstorm a follow-up, I’ve Seen Everything, which was certainly a more polished and radio-friendly album than its predecessor, though by that time the band’s constant exposure on the road and on MTV (who plucked that album’s “Hayfever” single for Beavis and Butt-head) had caused their welcome to be somewhat worn out. It’s not easy to find their next album, which wasn’t even released in America, and by 1996 they had no label, had sold their Shabby Road recording studio, and were in bankruptcy court. Several comeback recordings were attempted in the early 2000s, and they embarked on their first U.S. tour in over a decade in 2004, but few of their releases since then have attracted much more than occasional press and moderate concert crowds. It’s a shame that so few noticed, let alone listed to, catchy singles like their 2008 ode to Pink Floyd founder Syd Barrett, “Oranges and Apples,” but it looks like, at least for now, pretty much all anyone wants to hear from the band is music from Cake and I’ve Seen Everything. To that end, Trashcan Sinatras will perform acoustic versions of both albums at the Casbah on May 16.

The synth-heavy space rock of the ‘70s has never really fallen out of favor in Australia, where soundtrack songs like “Living in the Land of Oz,” from the vintage cinematic tripfest Oz: A Rock ‘N’ Roll Road Movie, are now considered national anthems. After all, this is a country where a tribute band only needs to bookend the name “Pink Floyd” with the words “Australian” and “Show” in order to sell out concert halls across the continent, so it should come as no surprise that Ocean Alley is quickly emerging as the country’s most Floydian original export since Billy Thorpe dropped his 1979 sci-fi rock opera Children of the Sun. The band has spent most of the past two years touring behind their 2016 debut, Lost Tropics, highlighted by a single for “The Comedown” that evokes the best syrupy keys and rolling basslines of early Supertramp and even Styx (pre-Dennis DeYoung), with a touch of island reggae thrown in for contemporary measure. The languid, almost slow-motion video for that track presents an interesting dichotomy wherein the protagonist seems to be depressed and drinking heavily, moving from a dingy sickroom cluttered with empty bottles through a stoner concert where the band plays for a blissfully grooving audience, all completely oblivious to the sad soul wandering in and out of their party. The band’s lyrics, likewise, tend to be dark, but couched in enough Xanax-dosed psychedelia to be almost unnoticed unless sought, matched in their other videos to the same sort of long wandering takes and speeding up and slowing down of the imagery that emulates either getting or losing a good high. There’s not a lot of live footage out there to go by, so it’s anybody’s guess how their aloof and somewhat ironic approach to island psychedelia will play on stage when they hit the Soda Bar on May 23, as part of their first U.S. tour.