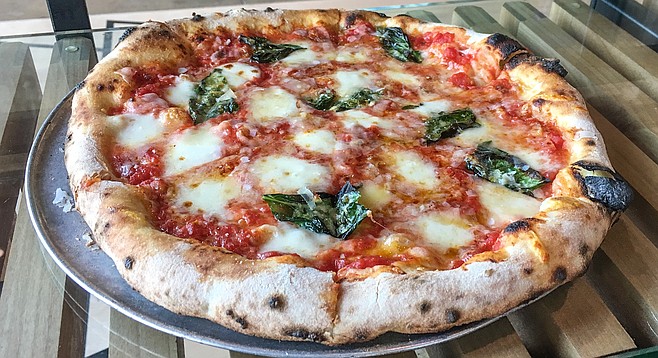 Attempts to make food halls viable in San Diego have come and gone over the past five years, and when I heard about Nolita Hall opening recently at the north end of Little Italy, I figured we had another contender. When I realized it isn’t a congregation of small food counters around a shared dining room, but a self-contained restaurant and beer hall, I thought, well, plenty of those have come and gone too.

Then I checked out the web site of Black Swan Hospitality, the young group behind the venture, which proclaims, “we aim to stir up the San Diego restaurant scene and offer unexpected hospitality experiences that will shift the flavor profile of our transforming city.” That statement reads as presumptuous in a couple ways, but having visited, I will credit them this: several aspects of Nolita Hall are indeed unexpected. 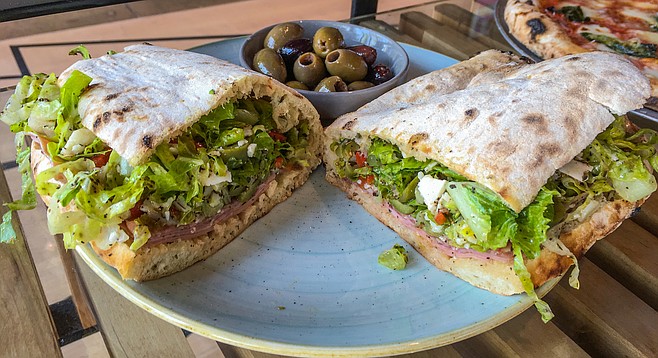 A slipper of bread makes this sandwich.

First, it’s beautiful. The spacious hall stretches a third of a block, with high ceilings and an extended skylight to match huge windows and roll-up doors that fully open the restaurant to a breezy southwest exposure. 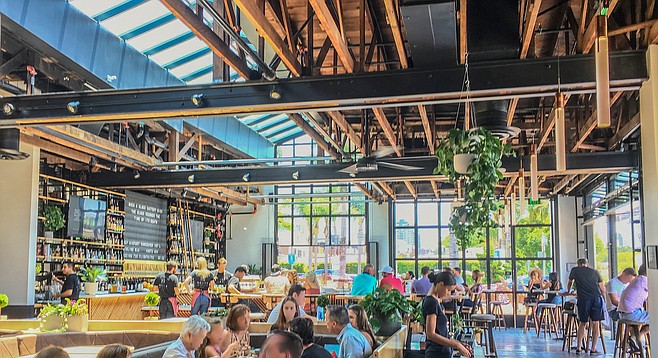 Inside, leafy green plants and elegant pendant lights hang from iron and wood beams, criss crossing a space that extends from a horseshoe-shaped bar at one end, across a minimalist dining room of high top and bench seating, to the recreational end of the restaurant, where a counter faces a pair shuffleboard lanes backed by huge projection screens equipped for videogames and televised sports.

It occupies a space between an elevated sports bar and sports-friendly lounge. My favorite part is the joint’s wood-fire oven. Not for looks, but for the fresh, charry bread and pizza crusts it churns out.

For $12, I couldn’t resist trying Nolita’s margherita pizza, the first in a list of pies made with organic tomato sauce, garlic sauce, or olive tapenade. The classic tomato, basil, mozzarella, and extra virgin olive oil lived up to my expectations; but the chewy, soft crust Italian bread it was baked on really stole the show. It’s nothing extravagant, simply great bread to gnash your teeth on.

This carried over to a much smaller, but not to be ignored, sandwich menu. A $12 sandwich features much the same ingredients as a margherita (or caprese salad): tomatoes, basil, mozzarella. It goes by the name cagna basica. My Italian’s never been good enough to have gotten rusty, and I wondered whether this was another traditional name to describe the winning combination of flavors. Alas, no. Online translators tell me cagna basica means, “basic bitch.”

All delicious, but again the wood-fired bread stole the show. It looks denser and flatter than most ciabattas I’ve tried — more like a slipper, which is the literal translation for the word ciabatta.

If you’d asked me last year, “What kind of restaurant does Little Italy need more of?” it’s doubtful I’d have suggested pizza or a beer joint. But I’d have had to take it back. A place like this may not transform the city, but it was overdue.