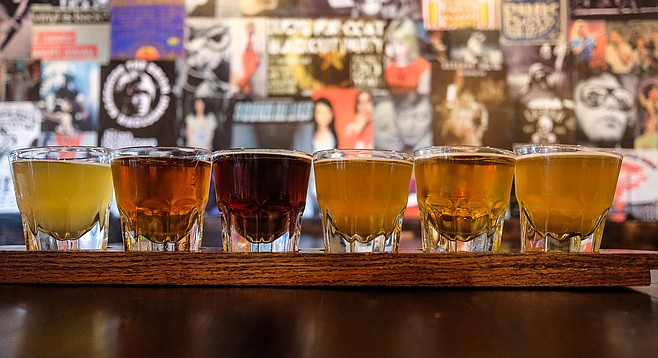 For those of us in South Park, a visit to our friendly neighborhood brewery means a short walk to South Park Brewing Company.

It hasn’t helped that South Park Brewing spent much of its first three years in flux. Originally, it was a brewery and seafood market restaurant, with broad, west-facing windows and a cramped kitchen. But sunlight shining through the windows during prime, late afternoon hours filled the room glare and heat; not a great environment for seafood. The kitchen got reconfigured, the menu switched to pub fare, and the windows darkly tinted.

But the dark tint could make the brewery appear closed, even when it wasn’t. Meanwhile, head brewer Cosimo Sorrentino, whose local name recognition proved a top lure for beer enthusiasts early on, left to pursue opportunities abroad.

From the perspective of a beer writer, there was reason to be concerned.

But something else was happening, irrespective of efforts to bring home beer competition medals, or generate buzz among the beer set. South Park slowly became what it was originally conceived to be: a neighborhood brewery. Drop by in the afternoon, and I run into neighbors, enjoying a day off, catching up with friends over a pint, and enjoying the brewery’s patio. Visit in the evening, and I often find young parents, enjoying the chance to walk to dinner, accompanied by beer thirst and children.

South Park Brewing is surrounded by crowd-pleasing. Next door, stylish Bar Kindred serves vegan food and tiki cocktails to throngs of fashionably attired young adults. Across the street, Italian eatery Buona Forchetta attracts two-hour waits for dinner. But the people descending upon these places don’t live in South Park; they drive in from all parts of the city.

As street parking has filled up, South Park Brewing has become a de facto oasis for local residents who want a family- and pet-friendly place of our own. The food got an upgrade early this year when Tacos La Mezcla food truck took over the kitchen. A section of window was replaced with an outward-facing counter, the minor change helping the place feel more open and engaged with the neighborhood.

Perhaps most important — getting back to the beer writer’s perspective — the beer has continued to deliver since Sorrentino’s departure. Hoppy ale fans can always count on a variety, including trending styles such as hazy and brut IPAs.

But as brewing has been taken over by Blair and head brewer, Ryan Sullivan, I’ve come searching for English beer styles, such as the deliciously understated Grassmarket 80 shilling ale, and 2 Griffs, originally released in the guise of an English pale ale, but now unabashedly identifying itself as an Extra Special Bitter.

The small brewery turns out a surprising number of these maltier brews, and latest round of $2 taster skewed British as well. An English mild, called Bugger Off, brought malt into the foreground, examining flavors I associate with brown bread. The Totally Bollocks English brown drank crisp, revealing dark toffee rounded out with nuttiness.

I don’t visit Hamilton’s any less these days, but I do visit South Park Brewing more, and try more English style beers than I have in years. Call it a lucky quirk of my neighborhood.