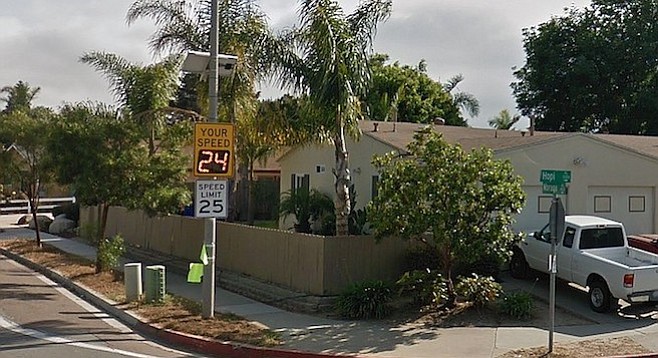 Some Bay Ho residents thrilled, some not

A topic of conversation for years has been the speeding, traffic, and accidents on Moraga Avenue. The city plans to remedy the situation by installing traffic circles (mini-roundabouts) on Moraga at Idlewild Way and Fox Place. Moraga runs between two main arteries in Clairemont — Balboa Avenue and Clairemont Mesa Boulevard. 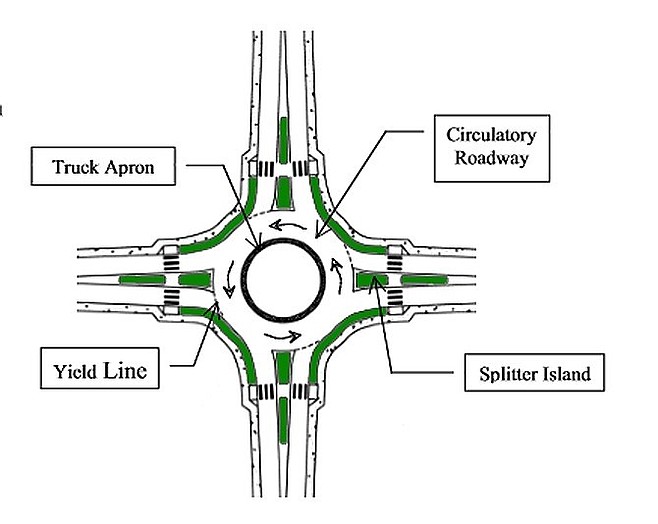 Elements of a roundabout

Longtime resident Nancy, who lives off Moraga, favors traffic circles over stop signs but thinks speed bumps are better at slowing drivers down.

"I guess it depends on the reason for adding [traffic circles] to Moraga — to keep up the flow or to calm the traffic."

Having lived there since 1992, Nancy said she has seen a lot of accidents on Moraga. (“Once a pickup was even upside down!”) She said children crossing Moraga to get to Cadman Elementary are at great risk even with stop signs. "There is virtually no police presence anymore to help keep the speed down." 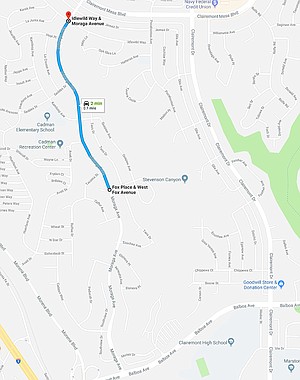 The traffic circles will be less than a mile apart on Moraga.

Traffic circles have been on the table before but it wasn't until 2015 that the local planning group gave the official thumbs-up. Planning group member Nicholas Reed said stop signs were placed in spots along Moraga to curb speeding in the early 2000s but it didn't do enough and that's why traffic circles got another look.

At a price tag of approximately $291,000, Anthony Santacroce from city communications said the decision tilted toward traffic circles because the planning group chose them over stop signs.

The mention of traffic circles in the city’s climate action plan probably didn't hurt their chances. According to the Air Pollution Control District, traffic circles used instead of stop signs or signals reduce emissions by reducing starts and stops.

Santacroce said there are approximately 17 roundabout/traffic circles citywide. The city started installing them in the 1990s; La Jolla has the most.

In 2014, residents living near and on Moraga supported the options of roundabouts and stop signs. The most popular option, for those residing on Moraga, was traffic signals.

Planning-meeting minutes from 2015 note traffic circles as the better option over stop signs because they force people to slow down in all directions and move traffic through the street faster. 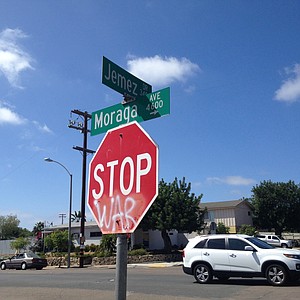 Moraga/Jemez is one block down from the main artery, Clairemont Mesa Boulevard, and the site of accidents and close-calls say residents.

It was noted that the concrete traffic circle won't be landscaped but instead decoratively stamped.

The response to one planning member asking about safety was that traffic circles "eliminate crashes from turns" and the "only safety issue is when someone doesn't merge properly and turns into a vehicle." It was stated that 70 percent of accidents are eliminated and pedestrians are safer due to slower vehicle speeds.

Bay Ho resident Reuben remembers the initial meeting when Moraga residents stated their case for traffic circles. He says he feels the opposing side wasn't heard. "I felt we were spitting in the wind; everything seemed to have been decided already." He attended the most recent January 3 transportation subcommittee meeting because the traffic circles were on the agenda. "When the committee said it was set in stone, it sounded like they were telling those of us who opposed it to drop all opposition, or else." 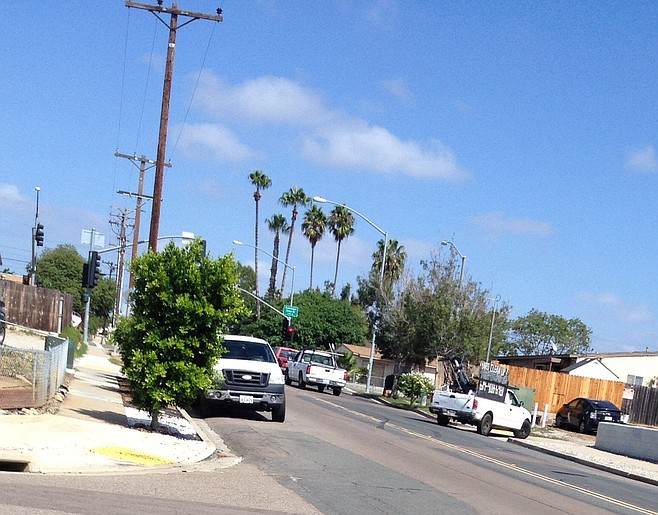 View from Moraga and Jemez toward busy Clairemont Mesa Boulvard. Idlewild is one block down where the traffic circles are planned.

Reuben said his neighbors are against the traffic circles since they feel it won't really slow traffic down. "When driving Moraga at 25 miles per hour, people ride my tail so close I feel they should at least pull my hair and kiss me. Some even zoom around me in spite of the double yellow line."

Claire Smith has lived two blocks off Moraga for 22 years and several times a week walks it. Smith said her biggest opposition to the traffic circles is that it "will result in a big expense and increased danger to pedestrians and bicyclists without positively impacting the actual problem."

Instead of traffic circles, she wants a four-way stop. She said while they have stop signs on Idlewild, they haven't tried one on Moraga. "Crossing or turning left onto Moraga [from Idlewild] can take five minutes during rush hour. Anyone on Moraga doesn't have to stop. Cars need to be stopped in order to slow down." 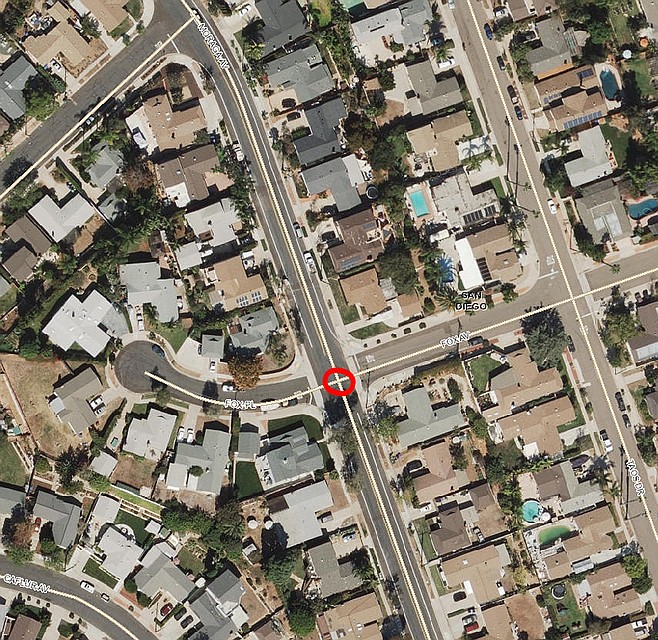 The traffic circle going in on Moraga and Fox Place is six blocks down from the one on Idlewild.

Smith has concerns about median islands to split traffic. Without them, she said it's dangerous for pedestrians because, while cars might go a bit slower, they likely won't brake for pedestrians. "They would have to block traffic to let a pedestrian cross. It will force pedestrians to jaywalk half a block down, creating a problem that doesn't exist now."

The flip side of the splitter-island coin, said Smith, is installing them could mean less space for parking due to the widening of the street by going into the sidewalk. "Technically, it's not a loss of property, it's an easement, but it's going to impact those corner houses."

At a 2015 planning meeting, the diagram the city shared clearly showed splitter islands and cutting away parts of the sidewalk.

Having worked in government for much of her life, Smith is suspicious about the city being so gung-ho about traffic circles before trying the less-expensive option of a four-way stop. "I'm fairly certain they have an ulterior motive and it has to do with the trolley. They probably want to widen Moraga and turn it into a main thoroughfare for the trolley stop and the traffic circles are just the first step. It's a shell game. If you tell people you want to add more traffic in their neighborhood, people would protest."

Not one Moraga resident I've spoken with over the past two years is comfortable with adding more traffic into their already overloaded neighborhood. This issue was called out decades ago in the Clairemont community plan, which includes Bay Ho: "In 1985, 12 collector streets had traffic volumes that were functioning 30 percent over the maximum number of average daily trips recommended for those streets due to high congestion." Moraga Avenue was specifically named.

Having lived in Australia for many years where roundabouts are common, I am so glad to see more coming to the US. The fears mentioned in this article are unfounded. Roundabouts work...

But... now if only the DMV would train our drivers how to use them. There is nothing in the DMV manual about how to navigate a roundabout. The driving exam should go though one.

The drivers here in the US do not signal to exit the roundabout. That is required in Australia and it works. It is common courtesy. It lets others entering the roundabout know that you intend to exit.

A common technique to slow down traffic is to put in a round about with slight speed bumps as you enter and exit. It forces traffic to slow down to enter. You get the best of both worlds. So if the locals aren't happy with the speed of traffic after the roundabouts are installed, they can add these entrance speed-bumps later.

Roundabouts work where drivers are accustomed to them and see them frequently. At this stage, neither of those things is true in the US. Training drivers in those courtesies would help them work better. As it now stands, they can work in low-speed, low-volume situations, but not where the traffic wants to go as fast as possible.

They also have to be done right. Carlsbad installed one about two years ago on Carlsbad Blvd where it intersects State Street. Previously they had a long left-turn storage lane for southbound drivers wanting to turn onto State Street, and it seemed to work fine. For the northbound drivers on State there was a long merging lane onto Carlsbad Blvd. That spot is on a slope, and when approaching from the north, it is hard to see across the circle and determine how much traffic is there. But where you used to just move into the left-turn lane and wait for a break in traffic, now you have to head to the right and then counterclockwise around the circle, and then quickly turn right off the circle onto another tight turn to go on State. It's a mess, despite the fact that the city got two or three awards for a well-designed roundabout. Today it is studded with striping, warning signs, and flashing "Yield" signs. If it worked right, all that would not be necessary.

I agree with pculeeqkota & Visduh but the good news is that rounabouts are useful in reducing the speed involved in crashes. Roudabouts are basically driver IQ tests which most drivers fail.

Sorry, folks. Common courtesy is rare in California drivers. I see cops, county, and city vehicles that never signal a turn. The law requires signals at least 100 feet before the movement, not as it happens. Who is a good driver?