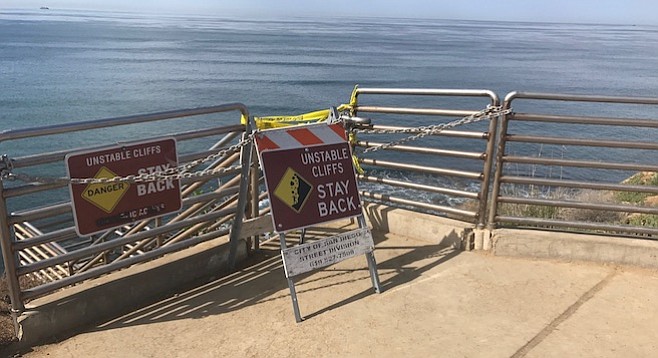 Sunset Cliffs surfers out of luck

On February 13th, San Diego city officials closed the beach access stairway at the western end of Ladera Street. An adjacent bluff failure that landed at the base of the stairway is the cause of the closure. The stairway is chained closed at the top and will remain closed until the bluffs are assessed and deemed safe again.

This stairway is the only formal public access point to the base of the bluffs and the intertidal zone in the entire Sunset Cliffs Natural Park, a 68-acre open space. There are five other informal access points in the park leading to various beaches or surf spots off shore. These informal access points can be very challenging during weather events and periods of high tides, high surf, and high usage as they receive no maintenance and are constantly eroding, making them dangerous at times. Access to the intertidal zone can be so precarious that most rescues by city lifeguards within the park are done by mechanical truck lifts or by boat and occasionally helicopters.

During the park's master-planning process in the early 2000s plans for three stairways within the park were proposed: one at No Surf beach, one at Garbage beach, and one to replace the Ladera Street stairway. Local surfers and concerned neighbors of the park voted the proposal down with fears of attracting more surfers and crowds to the area.

The Ladera Street stairway was replaced with the current stairway, but its design, with input from the "not at my surf spot faction" is woefully inadequate. So here we are 16 years later with the most picturesque park in San Diego with no safe access or egress from the surf and beaches.

The City is about to start Phase 2 of the Hillside Improvement project in the 50 acres of the park that lie south of Ladera Street. According to Alec Phillipp, public information officer for the city, the $3.1 million project is funded by a grant from the Coastal Conservancy and the Regional Park Improvement Fund. The contractor for the project is RAL Investment Corporation. They plan to break ground mid-February.

The closing of the stairs is a CYA move to protect from law suits. Now if someone ignores the signs then they are on their own.

until they hire some smarmy lawyer

SAN DIEGO – A man was injured early Friday morning when he fell roughly 50 feet down an ocean-front bluff in the Sunset Cliffs area of San Diego, authorities said.

The 30-year-old victim was conscious when emergency rescue crews reached him on the sandy beach, firefighters and lifeguards told dispatchers. He was airlifted to UCSD Medical Center in Hillcrest with injuries of unknown severity.