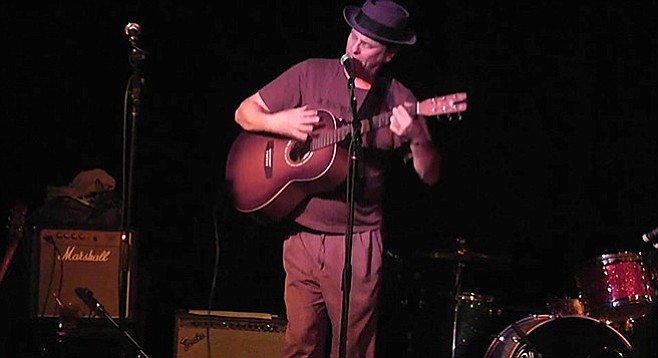 "Breathe that fresh air, we got plenty to spare"

“I’ve been playing this song for years, literally a thousand times, and it’s probably the second most popular of all my songs,” says acoustic troubadour Happy Ron Hill of his new studio recording and video for “If You’re Bored in San Diego (It’s Your Fault!).” “People always shout along with it, and they always say they think about it when they’re bored. Been working on the video for about a year… I’m finally [studio] recording a lot of my classic concert songs and posting videos to Youtube.”

Happy Ron Hill, "If You're Bored in San Diego (It's Your Fault!)" 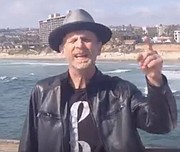 For “If You’re Bored,” Hill’s raspy voice (likened once in this paper to Tom Waits nursing a hangover) leads sing-a-long cheers for his favorite city, with lyrics such as “Breathe that fresh air, we got plenty to spare, turn off that computer, and head down to Hooters, we got a Zoo for people like you.” The video sports a near virtuosic acoustic bass solo by Paul Tillery about one minute in. “His bass playing adds a lot of depth to my shows, and he usually gets more applause than I do.”

Locales seen in the video include the Zoo, House of Blues, the Balboa Park fountain, Hooters, the Prado Restaurant, the Cardiff Kook statue, and a view of Black’s Beach shot from a group of hang gliders. Plus, there are cameos by local musicians including frequent keyboard collaborator Andy Gallagher (Trains Across the Sea) and a Pacific Beach boardwalk celebrity not originally slated for inclusion. “One the best shots is the world famous Slomo, the former neurologist turned rollerblade legend, who just so happened to skate by as we were filming.”

“Older people sometimes feel inspired by the song, as I feel that the older we get, the more important it is to get out and do things, and San Diego is the best place to do that.”

Since the 2008 release of his album Terribly Happy, Hill has mainly been honing his songcraft onstage, an endeavor greatly helped by hip replacement surgery he underwent in 2016 to remedy being born without a left hip socket. “That created tension and trauma through my body, which gave me a very raspy voice and made it harder to be a technically correct singer. Having less tension in my body has helped me to practice longer hours, and become a better musician overall.”

Hill has also been taking the occasional gig as an inspirational speaker at schools and elsewhere. “Having had more challenges than most in learning has given me a deep appreciation for the difficulties people have with learning music...I've decided to give back and take on a few private students, who are telling me I'm one of the few teachers that really understand the challenges of learning music.”

Hill’s video for “If You’re Bored in San Diego (It’s Your Fault!)” debuts at La Mesa’s Spacebar on April 28.

“I'm basically in the process of recording an album one song at a time, and releasing them as videos as I go. People love videos nowadays, obviously, and I like getting the feedback as I go rather than waiting until I finish an entire album.”

Thanks for the article the video refered to in it is here: https://www.youtube.com/watch?v=Fthj4TRlZbo