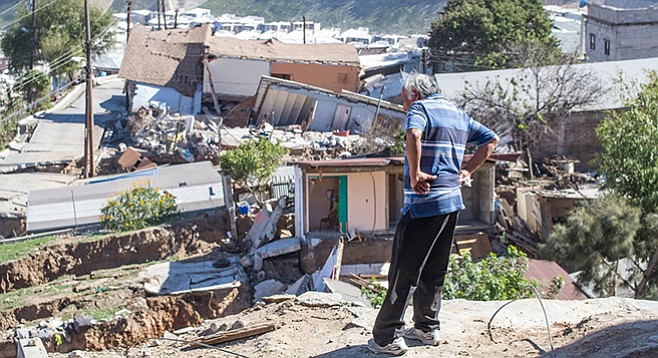 There are neighborhoods in the hills of Tijuana that always seem to be on the verge of collapse. Narrow streets that lead up steep hills give you a sense of vertigo as you’re riding a rollercoaster. Crest one hill and another one follows.

The houses which cling to these hills are an eclectic mix of improvised shacks made out of garbage. Sky television antennae crown many of them. Here and there stand half-built cement structures, heavily gated modern houses or apartments, or in one case a gigantic naked lady sculpture that encapsulates a house. It’s a twisted dark Dr. Seuss of a city with buildings that defy gravity, like a gigantic Jenga game pushing the limits of balance. 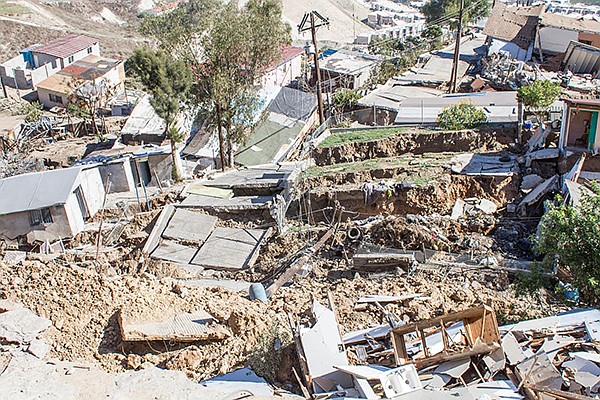 Note the chunks of what used to be Ignacio Ramírez Street.

“Ya se cayo la casa del Chemo,” I overheard a teenager wearing a black Xolos vest tell people coming out of a black Suburban at the entrance of the Lomas del Rubí neighborhood. “Paso en la madrugada, se quedó nada más un cuartito,” he continued as he helped unload the Suburban that was filled with blankets, water, and food. (“Chemo’s house fell down. It happened before dawn, only one small room is left.”)

“¿Gustan agua o café? ¿Una sopita Maruchan? ¿Tortita de huevo?” offered a woman on one of the donation tents at the entrance of a collapsed neighborhood. A sign behind her read, “Nuestro patrimonio no se vende por 10,000 pesos.” (“You guys want water or coffee? Instant Noodles ‘Maruchan’? Egg sandwich?” “Our patrimony is not for sale for 10,000 pesos.”)

Located 3.5 miles from downtown Tijuana, Lomas del Rubí (Ruby Hills) was a hillside neighborhood with broad views of the developing city. The view included construction of new housing development at the skirts of the hill called Fraccionamiento del Valle by Constructora Melo.

Personnel of Tijuana’s Civil Protection agency noticed a fault line in Lomas del Rubí on January 23rd and warned residents that the land might cave in soon. The night or February 3, more than half the neighborhood collapsed. There were no deaths or injuries reported, except the loss of some pets. Around 100 houses were totally lost, displacing more than 400 people.

I visited Lomas del Rubí a few days after the incident, and houses were still falling down. Next to the donation tents, near the entrance, police stopped me and asked for my identification. Members of the press, police, city workers, neighbors, curious people (some with donations), and dogs roamed the misfortunate neighborhood.

In the middle of Liberal Patria Avenue, a big yellow banner read, “We are tired of sleeping in the street worse than animals, we demand our life and harmony back. No more lies, we demand immediate solutions from the government and Grupo Melo, responsible for destroying patrimony of more than 350 families.”

Just a few steps after the sign is what used to be Ignacio Ramírez Street, a steep downhill that abruptly ends with a 10-feet gap. Under the gap, lies the debris of what used to be a neighborhood. In the middle of the destruction sat complete living rooms, appliances in working condition, fallen electric posts, cradles and mattresses hanging from the edges of broken walls, and parts of bathrooms that slid down almost intact. The next corner shared the same fate, nine blocks of what used to be family homes all ripped from their foundations and turned into a pile of rubble.

I went through the neighborhood with my camera, people still inhabited some of the houses that were on the verge of collapse and others rummaged for their belongings. As I walked through what was left of some houses, I could feel the earth moving underneath my feet. At the foot of the collapsed hill, construction of the new neighborhood by Constructora Melo continued.

As I made my way out of the risk area, I saw an old man weeping near some debris.

“Can you imagine? I spent 25 years of my life right there where the blue sign is,” said Mario Hernández as he pointed down to the left towards a house that was completely destroyed. “My house burned down twice in the past. I rebuilt it with my own hands. And now this.”

“All those white houses that you see, that used to be the hill,” Mario pointed over to the new construction. “They [Constructora Melo] sliced all of this. They were using dynamite so the soil would loosen up for them to dig. And what happened? BOOM! It all came crashing down. The hill is really tall, over 100 meters. It all slid down.”

According to the secretary of urban development, Alejandro Lomelín, dynamite was not the cause of the landslide, since there were no permits given for the use of explosives.

“Some of us are sleeping in tents on the street, others in their car,” continued Mario as he dried the tears in his eyes. “I’ve been staying at a neighbor’s property. All the years I’ve been living here, she was never there. But after all this happened, she wants us gone. I understand it’s her property, but we are not building anything, we are just staying there momentarily. The official report of what happened is supposed to come soon. The mayor is supposed to be here. But nothing so far.”

“This neighborhood never had any problems, it was very tranquilo. No one tried to break-in my house or rob me. When there were earthquakes or heavy rains, nunca nada. Until they [Constructora Melo] came about. I don’t want more or less of what I have. I want my property back and I will rebuild my own house again. For the foundation to be what it was, to live in the same place, that’s what my hopes are.”

While I was talking to Mario, a neighbor approached to give me her input.

“We are going to fight, because they destroyed our whole lives,” said Alejandrina Verdugo loudly. Alejandra had been living in the neighborhood for 35 years, she pointed in the direction of a little girl. “You see her, that’s my granddaughter, her as well, they go to school near this neighborhood. That over there is my daughter and her husband, they have kids as well. My house is 200 square meters, my family grew up there. This is what we know and what we love. And now it’s all gone and they tell us it’s going to be okay, that they are going to move us. But they want to take us to really far to places, almost to Tecate or further. Places that we don’t know or care about.” 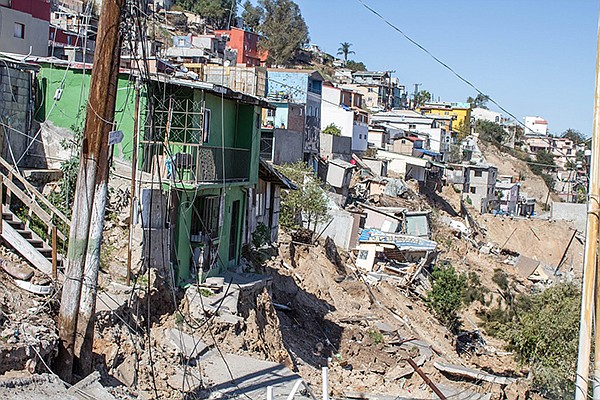 Residents blame the slide on builders down the hill using dynamite. The contractor denies the accusation.

“I once heard dynamite explosions 35 times! Thirty-five times I tell you!” continued an infuriated Alejandra. “It was always before dawn, never during the day. On top of all that, malandros (ne’er do wells) and outside people come to rob us what little we have left. Can you believe it? People see our situation and instead of helping, they come to take advantage of us. There are plenty of police around, but when robbers came to steal from us, the cops were on their phones. We yelled for them to get the robbers, but it was the neighbors who apprehended them. They [neighbors] wanted to lynch them, but the cops took them in their truck. Later in the afternoon, the same malandros were in the neighborhood again and this time they were threatening us to stay quiet.”

Besides suffering the landslide and robberies, the neighbors also suffered a fire. An empty lot owned by Jesús Soto was loaned to five families to keep their belongings, but a fire consumed clothes, appliances, and other personal items.

“This doesn’t have a solution unless someone invests millions of pesos, and no one is going to do that,” said Carlos Espinoza, an engineer who was inspecting the area for his own curiosity. “It’s much easier to use dynamite to slice the hill than digging it.”

Twenty days after the landslide, on February 25th, the director of civil protection Antonio Rosquillas declared Grupo Melo responsible for the landslide. “Why did it fall down? Applied basic physics, you take out the base and it all came down,” the director told Frontera Noticias. The case is still pending a judge’s decision.

The residents of Lomas del Rubí are organizing ongoing protests against the government and against Grupo Melo until they get their house back. Grupo Melo still denies accusations and affirms that they did everything under the permits of the law.

San Diego would look the same if the developers had their way. There is a reason for building codes and zoning laws.