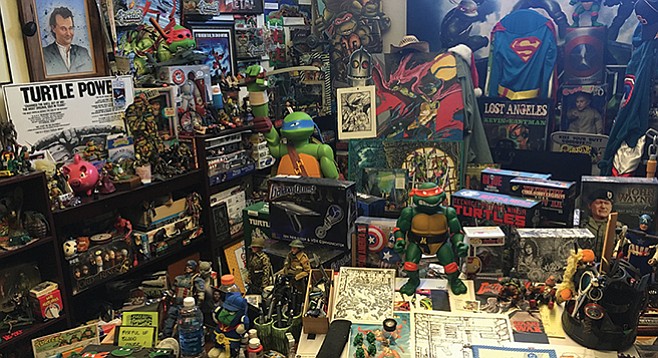 Feeds and is fed by popular culture

“The Teenage Mutant Ninja Turtles,” says San Diego Comic Art Gallery manager TJ Shelvin, “are unlike anything else. On the one hand, you’ve got this major machine that it became” — six movies, six TV series, at least six comic-book series, the toys, the concert tour, and the breakfast cereal. “On the other hand, you can put them with those indie titles from the ’80s that weren’t being published by DC or Marvel, things such as Love and Rockets. They have indie acceptance and mainstream success.” 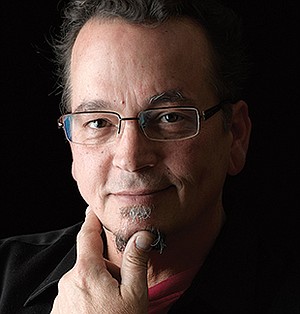 Kevin Eastman: “The [Teenage Mutant Ninja] Turtles have always been a blessing of pretty epic proportions."

That kind of crossover power makes it fitting that Turtles co-creator Kevin Eastman serves as the gallery’s curator; sometimes, it can feel like the whole industry is poised to follow the Turtles’ long and winding road through the cultural imagination. Just now, the gallery contains an Archie exhibit: comics, dolls, and — most importantly — original comic-book art, framed and lovingly displayed. 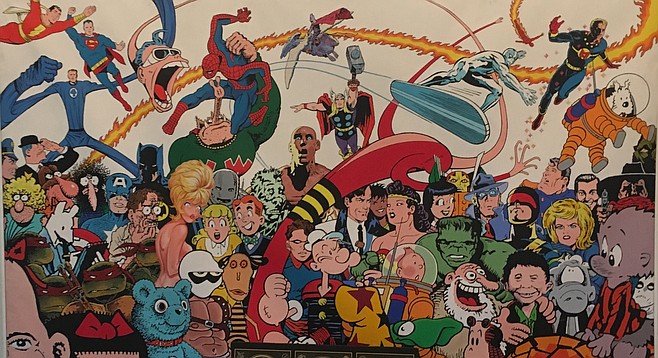 “I don’t yell at anybody when they don’t know we’re high art,” says Shelvin, smiling. “One thing we get to do here is let people know that we’re a true marriage of art and literature. High Tech High came through, and they did a big project combining their science and literature classes. They came up with superheroes based on different diseases and physical afflictions; they’re savvy about how comics play off things in the world around you.” (Shelvin says about ten schools a year visit the gallery, including the Children’s School in La Jolla, which made Eastman a subject in their Great Artist program.) But it’s also popular: Archie is on the wall because Riverdale is on TV. “We get moms coming in and saying, ‘Oh, I loved Archie as a kid,’ and we get 15-year-olds who are, like, ‘Wait a minute... Riverdale is a comic?’”

IDW, the company that runs the gallery next door to its offices in the Liberty Station arts district, had its first big hit with a comic-book version of the TV show CSI. Many licensed titles followed, including Transformers, The X-Files, and My Little Pony, which sparked a resurgence in kid-friendly comics. At the same time, it released the Alaskan vampire series 30 Days of Night, which started a Hollywood bidding war and became a movie. Now, “we actually make our own TV shows,” says IDW co-founder Robbie Robbins. “We’ve had two seasons of Wynona Earp, Dirk Gently’s Holistic Detective Agency is going to be on BBC America, and we’re shooting a pilot for Locke & Key.” They all started as IDW comics.

But if the company both feeds and is fed by popular culture in general, the gallery remains a shrine to the foundational form of sequential art. Multiple displays track a comic-book page’s progress from sketch to print, and the library boasts artists’ proof editions rendered in full original size alongside multiple collections of old funny-paper gems. One classic title — Little Nemo in Slumberland — scored an IDW revival, though Shelvin grants that more people seem to know it from the 1989 animated film than the 1905 Winsor McCay Sunday strip.