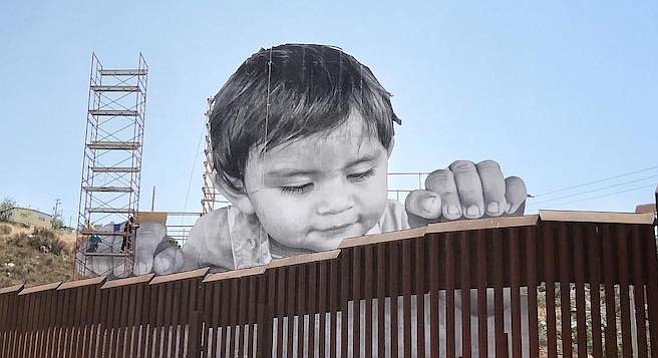 French artist JR the latest to use barrier as canvas

An art installation by a French artist that goes by the name of “JR” was unveiled at the Tecate border with the U.S. on Thursday (September 7). Taller than the border wall at 30 feet, the art is an enlarged black-and-white photo of a one-year-old baby named “Quiquito” mounted on scaffolding.

“Some people dream about fantasy worlds, I dream about walls,” the artist — sometimes referred to as “the French Bansky” — told the New York Times.

This is the artist’s first piece in Mexican territory. The controversy surrounding the border wall has become an inspiration for artists who see it as a giant canvas.

In November of 2015, before Trump was considered a serious candidate by most people, the artists’ collective known as Indecline painted a mural of Trump with a ball-gag in his mouth and the words “¡RAPE TRUMP!”

In November 2016, while exploring the border town of Jacumba with fellow writer Chad Deal, we found an art installation made with rags, broken ladders, tires, and a sign that read on one side “Are you nice? [Sí] [No]” and the other side read, “Were we nice? [Sí] [No].”

In January 2017, a collective of artists from Japan named “Chimpom” built a treehouse that peers over the border in Colonia Libertad, one of the oldest neighborhoods in Tijuana.

That same month, artist Ana Teresa Fernández “erased” the border wall by painting sky-blue the section of the wall that extends into the ocean. From a distance, it looks like there is no wall at all.

Local Tijuana artist and director of La Casa del Tunel art house Enrique Chiu has been working for over a year on what he calls El Mural de la Hermandad (“mural of brotherhood/sisterhood”) Chiu invites fellow artists or anyone who wants to participate to paint the entirety of the border wall with positive messages of brotherhood.

why does the baby have man hands?

Maybe the artist liked that Seinfeld episode where his then-girlfriend had man hands.

Big baby is right. "Waaaah, we can't invade another sovereign nation any time we want, waaah!"