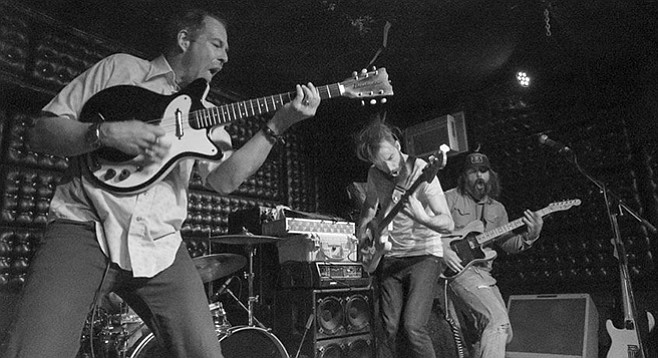 Octagrape still willing to do it in front of people

"The last time we played live, everybody loved it."

Octagrape drummer Ely Moyal distilled the band’s spirit, as singer/songwriter Glen Galloway recalls: “We were planning a tour up the coast, and he goes, ‘You know, I just don’t think the juice is worth the squeeze.’”

Galloway laughs. Such feelings were at the heart of Octagrape around its January 2016 album Aura Obelisk and Why Are We Doing This in Front of People? — a documentary by local filmmaker Bill Perrine about the band’s 2015 tour of the East Coast and Canada.

“We were on fire. We were taking all this momentum of playing together constantly,” Galloway recalls. “That is why I felt so strongly about recording Aura Obelisk, and doing half of it in Sacramento with Chris Woodhouse. I could see that the lineup was not going to last forever.” This is portrayed by Perrine.

“[Why Are We Doing This…] is kind of wonderful,” says Galloway. “Art always involves promotion. If someone is doing something for an artist, it is pulled into the ‘promotion machine.’ This film is not. It is not telling me why Octagrape matters. You come away from many well-shot documentaries saying, ‘This band or this director matters.’ This documentary provokes that mentality.”

Much has changed since the album and documentary release in 2016 and 2017, respectively. Octagrape had no bassist upon the album’s release; and in November 2016, guitarist Jason Begin became a father and moved to New Mexico. Galloway started a new band called Sumatraban.

“But, Octagrape played three weeks ago,” Galloway recalls of a recent Why Are We Doing This… showing at the Popular Culture Association’s annual convention. “Jason was in town, and [Otis] ‘O’ [Bartholameu], Ely and Alex [Dausche] got onboard. It turned into an impromptu reunion.”

What’s in Octagrape’s future? “Jason and I did the majority of the writing,” Galloway says. “It’s as much what Jason wants to do as anything. The last time we played live, everybody loved it. It wasn’t this thing that we had to do. The next album I want to be the same way.” Galloway today plays mostly with Sumatraban.