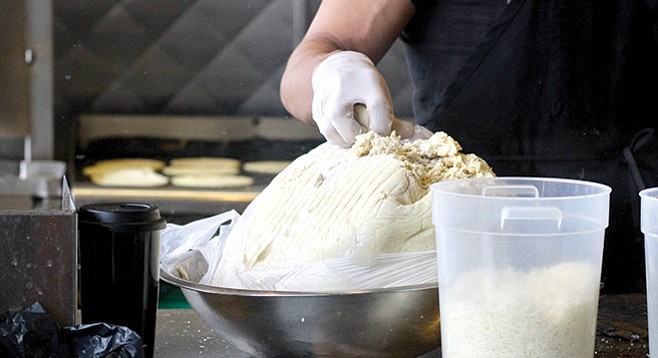 Think of a Tijuana-based version of In-N-Out.

An impressive lineup of hot sauces stands guard along the front window counter of Un Mundo, defending the cheerful interior from the curvy corporate brickwork and congested parking lot outside. The motto here is “SoCal fresh. World inspired,” and there is an exotic grilled-chili tang that dominates the El Porko Rico taco’s roasty, toothsome meat. Fried red onion adds sweet heat, countered by a generous drizzle of melting sour cream. It ain’t especially big and, at $3.95, it ain’t especially cheap, but it’s better than tasty, and this is La Jolla. And on Taco Tuesday, you can get it with a beer for $6.

Just a long stumble from the end of Newport’s funky bustle, tucked cozily under Ace Tattoo, with a shipshape interior and rusticated outdoor seating. The Trifecta taco runs a whopping $5.79, but it’s a whopper: sweet shrimp, peppery scallops, and grilled fish under mounds of raw cabbage and avocado, plus chopped red onion, tomato, and cilantro. The most impressive aspect is the way each element stands up for itself instead of melding into a messy mélange. “Hey, shrimp! Hey, avocado! Hey, scallop!” et cetera. Well, maybe except for the tomato, but the shrimp more than makes up for it.

“These tortillas are like corn muffins — so pillowy!” said The Wife, grinning, and gesturing at the glistening mound of masa in the very open kitchen of this industrial-eclectic neighborhood joint (#BaddestAssInNorthPark). They crisp up nicely, too — 54 cents got me a pile of rigid rounds to crack and stab into the Mixed Nut salsa (peanut, almond, cashew, hazelnut, Brazilian nut, with roasted chile de arbol — zing!). The nontraditional side of the menu emphasizes “interesting” perhaps even more than “delicious,” but they happily overlapped with the $3.95 Ocho: “braised-then-grilled octopus with poblano, pesto, and cheese.”

Think of a Tijuana-based version of In-N-Out. The red, white, and gray decor. The super-basic menu. The long and steadily moving lines (which are taco-specific, and longest for adobada or al pastor). And the solid quality at a solid price ($2.25 for all tacos except brain and tongue, which come in at $2.40). The adobada man is a marvel of efficient speed, popping tortillas onto the griddle, whipping his knife along the edge of the rotating, constantly crisping column of pork, dousing the firm and fat-sweetened meat with creamy cilantro, and sprinkling on a few bits of onion for customers ordering two, four, six at a time.

Concerning Un Mundo... Once again an article that states its 'La Jolla'... It is not.