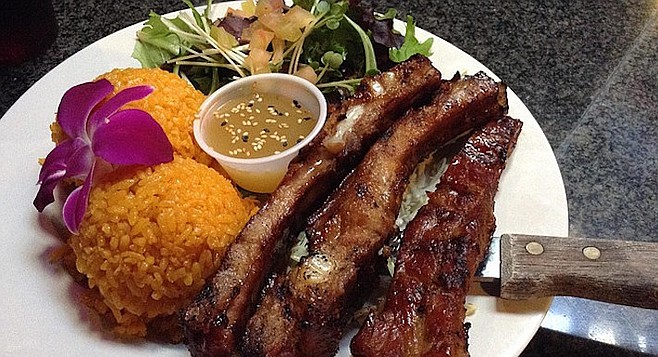 Guamanian — more habanero and serrano peppers than Hawaiian and Filipino

A surprise in Barrio Logan

Wha? There’s no eateries in this part of the Barrio. What’s up? 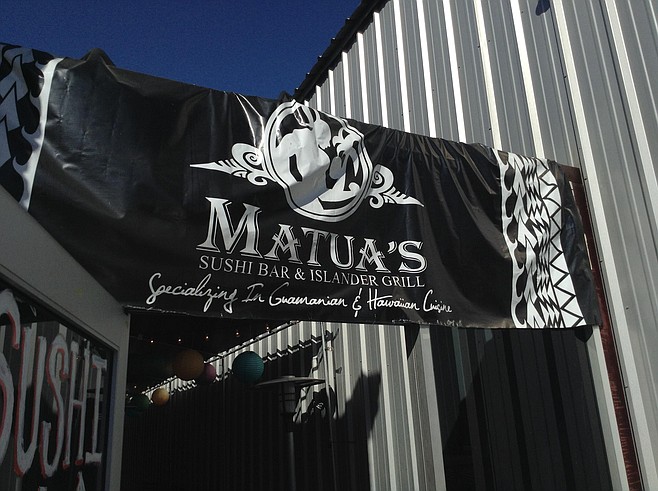 Matua's has shifted up from Chula Vista.

I pull the cord on the 901. Sixteenth and National. Whole city of homeless tents stretches north. Then, where a passage leads to Sushi on a Roll, a kind of wholesale sushi factory, I see the new banner. 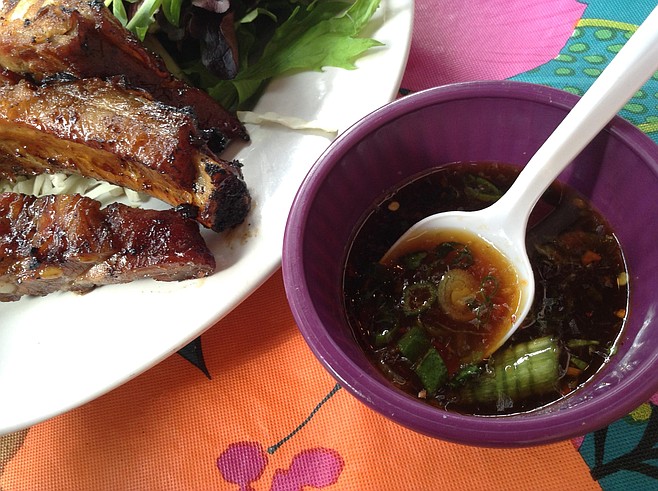 Must be down this same passage.

Tables line it. “Yes, we’re pretty new,” says this gal at the end. “We used to be down in Chula Vista.” 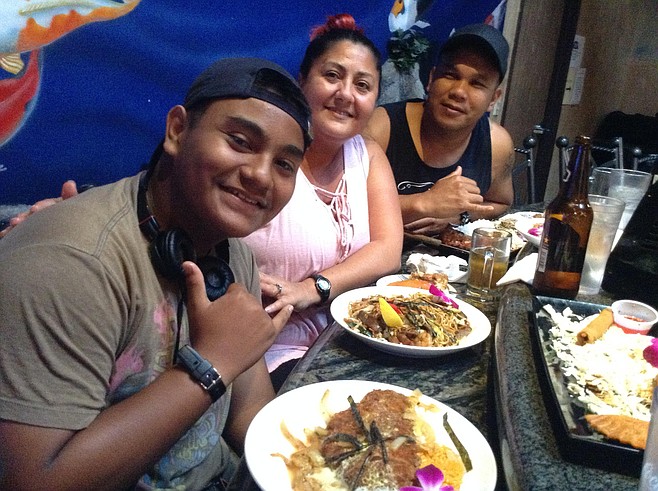 Jordan, Janet, Malcholm. More than 25,000 Chamorros have settled in here.

It takes your eyes a while to dial down from the glare of the sun outside, but when they do, right here near Father Joe’s, you’re in this classy semi-underground room with skylights, way-big murals of koi fish, giant white and red sake vats that look like ceremonial drums, a circular bar of dark marble, and the torporific sounds of laid-back reggae songs on the system. 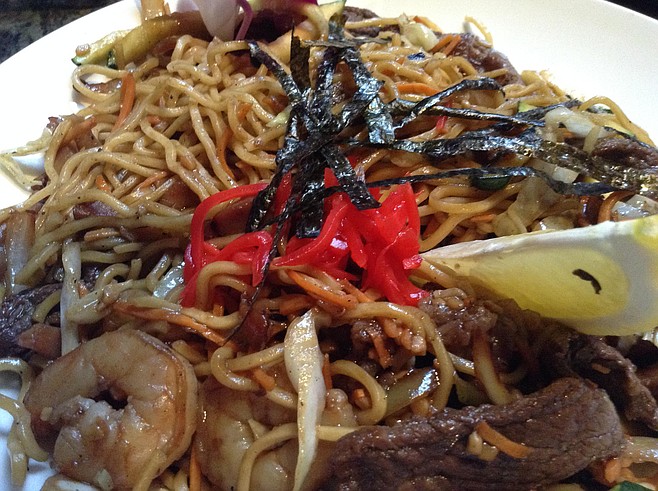 Yakisoba. Seems like Japanese is the strongest gastro-tide running.

I take a seat at the bar and watch as four big plates of food parade by, on their way to a group of guys and gals further around the circle.

“Wow. What are those?” I ask the manager gal, Isabel. 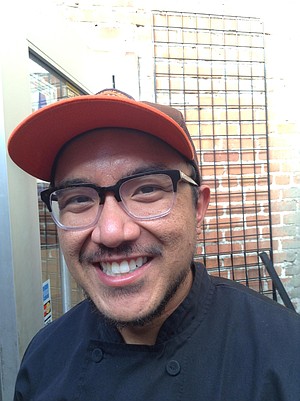 “Well, first one’s the Hawaiian Combo, with the huli huli chicken and the kalua pig with cabbage, macaroni cheese, and rice.” 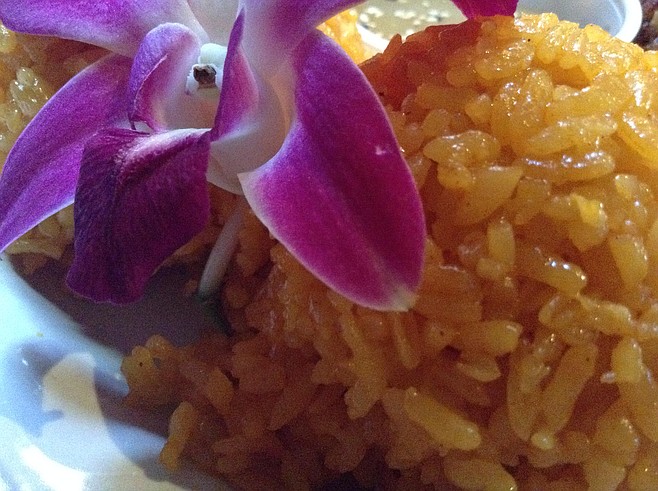 The coloring comes from seeds of the achiote tree, a.k.a. the “lipstick tree.”

“Not really. Racquel, she’s the owner, along with her dad, they’re Chamorro, so Chamorro food, too.”

Need a quick geography lesson here. Turns out “Chamorro” is the name for the people who live on Guam, the U.S. territory that’s basically the summit of a chain of mountains that haul up from the deepest spot on Earth, the Marianas Trench, 36,000 feet down. So that’s like living on top of Mt. Everest plus 7000 more feet.

And, oh yeah....I remember now. Coming up 500 years ago, in 1520, Magellan’s first round-the-world fleet got totally left behind and out-sailed by these Chamorran ocean-going outriggers.

Guam’s south of Japan, east of the Philippines, west of Hawaii. So, foodwise, you can expect Chamorran — Guamanian — food to be a mix. But here, so far, seems like the Japanese is the strongest gastro-tide running.

“So, which is the most Chamorran dish?” I ask Ronnel, the chef who’s checking for orders.

I go for that and, man, I’m so glad I did. The first thing you notice is the orchid. Purple, planted into startling orange rice. Behind that, a little bowl of sesame ponzu sauce, a house salad of sprouts, arugula, and marinated cucumber chunks.

But the main attraction is the pork ribs, three of them glistening and steaming away, wafting up charcoal smells and saying, “Eat me!”

Then, behind them, another little bowl of liquids, with peppers and spices gleaming out.

Finadene’s a combo of lemon, soy, green onions, and a mix of habanero and serrano peppers plus crushed red pepper. So, okay, spiced-up soy, and you breathe a little fire, but I tell you, it turns these ribs from “great” to “Ay! Caramba!” Dang, they’re delicious.

And with the sharp but beautiful taste of the finadene, the rice is an important palliative here: plus, it glows up at you as orange as a Chamorro sunrise. Turns out the coloring comes from seeds of the achiote tree, a.k.a. the “lipstick tree.” “We use the seeds of the achiote for coloring but also for the flavoring, the peppery effect,” says Ronnel.

He says the Spanish brought achiote over from Central America. “We were under a lot of Spanish influence,” says Ray Rodriguez. “They were in charge for, like, 300 years. So I guess Guamanians today like their food more sour and spicy than, say, Filipinos or Hawaiians.”

There’s a couple more Chamorro eateries in San Diego. Not surprising: more than 25,000 Chamorros have settled in here. Many, like Ray’s dad, are ex-Navy. Heck, that’s a seventh of the entire population back in Guam.

“It means ‘the leaders, the lordly ones, the upper echelon of Chamorro society,’” says Ray.

Am I coming back? Oh, yes. For more Uncle Frank. That stuff is munghi.