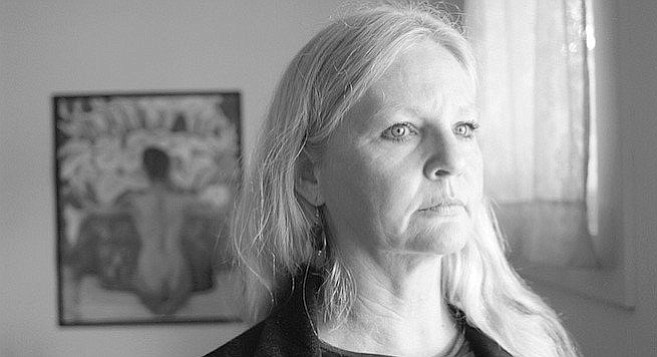 Oh, no! What a terrible loss.

There are simply NO words in the English language to properly describe the sadness I feel in loosing such a DEAR FRIEND. Susan was loved by so many in the So Bay as she dedicated herself to reporting REAL NEWS, FACTUAL NEWS. She took pride in her approach to investigative reporting.

For years we down here south of the 8 would consistently turn to The READER because of Susan Luzzaro.

But enough about Susan, the investigative, factual reporter. She and her husband Frank shared a love few will ever know. They really liked each other you know. Rarely did you see her without "MY Frank", as she referred to him. Her family meant everything to her - I can still hear her sharing fun stories of her loving children and Grandchildren and their fun get togethers.

Little did I realize the impact this petite woman with the silvery hair would have on me. I am comforted in my belief that this is not the end - that I will see her again in the next life. Few I have come to know in my life have influenced me so. I am better for simply knowing her, because she had a way of helping me to see things as they were, not simply the way I wanted them to be.

REST IN PEACE MY FRIEND - THANK YOU FOR BEING YOU!

I got to know Susan Luzzaro first through her stories and then from occasional conversations and email exchanges. It did my heart good to know that someone with her integrity and ethics was looking out for the South Bay community at a time when it seemed that the "good guys" were continually losing. It is thanks to her dogged pursuit of the truth that the Sweetwater district was turned around. She kept us informed and gave us an opportunity to come together as a community in our fight against corruption. Although I didn't know her well, I respected her immensely and am profoundly saddened by her passing. My condolences to her family.

Gone too soon. Her stories made real a difference in this community.

Her stories exposed the ill deeds in my district. Sorry to hear this.

What a terrible loss. Susan was a voice for many of us parents and community members in the South Bay on education issues. She provided awareness, and gave us a forum to discuss what was happening. It feels like she was responsible for creating this community where we were able to hold our elected school board officials accountable. She will be missed. RIP Susan.

Susan had the unique ability to put into words the very deeds that were undermining our community. Through her constant vigilance and integrity, things changed. We know the battle isn't over for all of us, but she taught us how to fight--with decency, with accuracy, with keen observational skills, and with her words. Quietly effective, outstanding as a writer and unsurpassed as a community voice. I hope her unfinished work can be somehow put together so that we can have that much more from her.

We will miss you so much, Susan. I knew you were ill, just didn't know how ill. I thought you would get better. You stood up for Sweetwater teachers. You were threatened by corrupt administrators and their local thugs, yet you held to your beliefs in positive change. Nobody can do this like you did. Your family loves you so much. Sweetwater teachers love you, too. We need more people like you in our midst. Your support made us stronger. You are our hero.

It was my misfortune to learn of Susan and her reporting late. I never met the lady. But what an impact she had on the South County and its institutions! Most of us would become discouraged at being a lonely voice in the wilderness for years on end, but she persevered. Her writing shows a great talent for expression. I too will miss her.

Mrs. Luzzaro was fair in her reporting. She made everyone aware of the truths that were being hidden. My condolences to her family and friends. RIP

Susan's legacy was that she was driven by devotion to her family, a deep heartfelt caring of friends and her tenacity to expose those who infringed on the rights and wellbeing of others. Whether Susan was with family, friends or her community, her needs took a backseat to those around her while feeling enriched by their love and support. We love you, Susan......we love your family. May you be surrounded by the innocence of monarchs. Thanks for sharing.....we will miss you. Fran and Janie

I have just read the list of Reader pieces by Susan Luzzaro, from bottom to top, beginning with the story of her parents' murders and ending with her dialogue with death, "I Think I'm Losing." I was familiar with her intrepid work on Sweetwater school improvement, but this last essay was the work of a wonderful observer and superb writer -- no "backyard journalist" she. With her death, we have lost a low clear voice.

What a loss on so many levels. She was a brilliant, kind-hearted woman who was taken too soon. Susan cannot be replaced.

I knew Susan a short time but I won't forget her. She helped my school have a voice. She was fair and passionate about the truth. Susan will truly be missed. My condolences to her family.