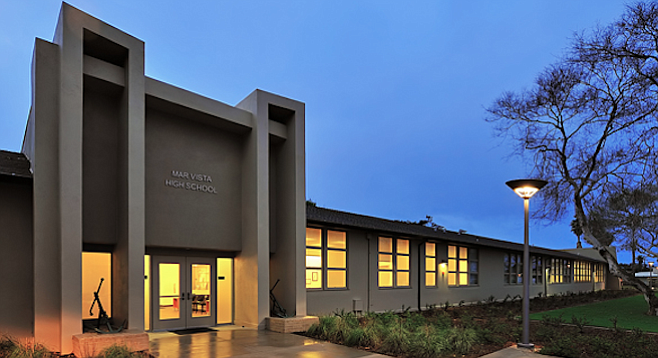 A former Mar Vista High School student is suing the Sweetwater and Coronado school districts for failing to prevent a Navy Junior ROTC instructor from luring her into a sexual affair.

In September 2016 ROTC instructor Martin Gallegos was sentenced to one year in prison and three years of probation for having sex with an underage student at the Imperial Beach high school.

According to the complaint, officials at Coronado Unified School District, where Gallegos worked in the ROTC department, were aware that the 48-year-old was fostering improper relationships with female high school students. Gallegos was forced to leave his employment at Coronado High School. He applied to an ROTC position at Mar Vista High School in the Sweetwater Unified School District for the 2015/2016 school year. But during his application process, alleges the complaint, administrators at Coronado Unified failed to notify Sweetwater Unified of the allegations against him.

The girl, who served as the ROTC public affairs officer at Mar Vista, worked directly under Gallegos. Over the course of several months, says the lawsuit, Gallegos began "grooming" her, giving her rides and buying her lunch. Gallegos began sending her text messages. Not long after, the girl informed the ROTC instructor that she had feelings for him. Gallegos reportedly brushed her off, stating that she needed to wait a year, when she turned 18, before anything could happen.

Despite his rebukes, Gallegos continued to have a relationship with the girl. In March 2016, hours before the ROTC ball at Mar Vista, Gallegos had the girl meet him in his office. He began to kiss her and forced her to give him oral sex.

The girl informed friends and another ROTC volunteer about the relationship. They compiled the texts that Gallegos had sent her and approached Gallegos’s bosses, Master Chief Enrique Alberto and Master Chief John Strait. The men, however, told the girl’s friend to leave it to them. Frustrated by the inaction, the friend sent the text messages to school administrators.

Law enforcement was notified and Gallegos was charged with statutory rape, but not before the girl decided to quit school.

Reads the complaint, "As a result of the wrongful conduct alleged herein, Plaintiff has suffered, and continues to suffer great 'pain of mind and body, shock, emotional distress, physical manifestations of emotional distress, embarrassment, loss of self-esteem, disgrace, humiliation, and loss of enjoyment of life; was prevented and will continue to be prevented from performing Plaintiff's daily activities and obtaining the full enjoyment of life; has sustained and continues to sustain loss of earnings and earning capacity; and/or has incurred and will continue to incur expenses for medical and psychological treatment, therapy, and counseling."

In September 2016 Gallegos was sentenced but not before the girl addressed Gallegos and the judge.

"I was so confused because I had never had that before in my life…. He should never be put in a position of power like that again," the girl told the court, as reported by NBC7.

Being more than just a little bit acquainted with ROTC, both junior and senior, there are puzzling aspects to this case. A few years ago I had multiple occasions to observe the junior naval ROTC program at Orange Glen High in Escondido. The teaching staff there consisted of a retired naval officer, and a retired navy chief petty officer. Later on, the chief was replaced by a retired marine corps master sergeant. They were, technically, employees of the school district, but the Navy did have its influence on the program. And you can be sure that the Navy was paying for the whole thing, reimbursing the district for its costs, and probably providing some additional financial incentive to the district. In Air Force junior ROTC units the arrangement is just about the same.

There's no mention of Gallegos' connection to the Navy or Marines. His age might indicate that he was, indeed, a retired military man. I'd think that the Navy would vet any instructor in such a role just to insure that it wasn't embarrassed down the road. This sort of thing is a major blot on the program, yet there's no mention of the navy being sued. For sure, the school did not do its homework on Gallegos, but there was obviously a breakdown in oversight and supervision of the newly-hired instructor.

One final comment is that I never read or heard a report of his sentencing last year. The Reader no longer closely covers the So County school districts. As to the U-T, it may have reported the matter, but only in its southern regional section.

Hiya Visduh. Not being very familiar with ROTC, I apologize for the lack of specifics. According to the complaint Gallegos was a First Sergeant and was in the Navy. The complaint, however, does not name the Navy as a party. I will check with the attorney and/or Navy to see his status. Thanks for the comment.-dH

Schools and churches are magnates for child molesters. They go where the children are. Teachers/instructors/aids etc. need to be thoroughly investigated prior to any offer of employment and they need to be constantly monitored. School administration is lazy and lax on their hiring practices.

Absolutely correct. But I was suggesting that the Navy was equally remiss. In fact, many of us rather expect schools to drop the ball from time to time, but I thought the chain of command in the Navy would have done a better job.