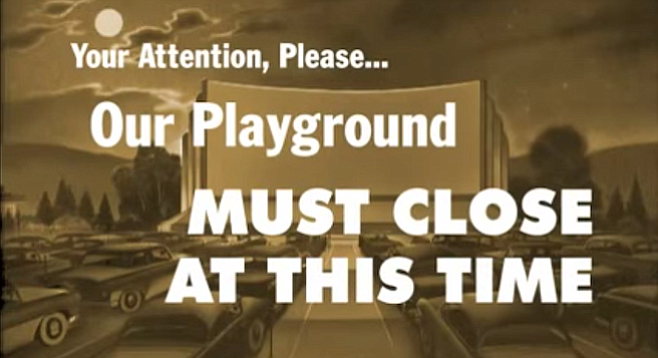 It’s a movie theater, not a McDonald’s Playland

It is the sworn duty of parents to instill within a child the three golden rules of moviegoing: Sit down, shut up, and enjoy the picture. Little more than a restaurant that shows movies, the conscienceless folks at Cinépolis are set to give bad parenting a shot in the arm by allowing children free run of the theater.

Cinépolis was the first movie outlet to introduce San Diegans to the lowbred concept of at-your-seat waiter service. It’s clear that disrupting the show is a top priority, so it comes as no surprise that the chain plans to rig two of their multiplexes, including the one in Vista, with so-called “kid-friendly” theaters.

Cinépolis Jr. debuts next week. The spruced-up auditorium at the Vista location will feature a colorful playlot situated between the screen and the front row of seats, a jungle gym, and squishy beanbag chairs.

This is not the first time exhibitors have tried playgrounds as a form of promotion. Drive-ins across America once had swing sets and teeter-totters situated beneath the screens for kids to play on prior to showtime. When the show started, the playground closed. What’s to stop bored children from freely roaming the theater?

How much faith must an exhibitor have in their product if they need to stock an auditorium with an alternate form of entertainment? It’s like saying, “Hey, kid. We know this is the 90th go-round for Beauty and the Beast. It’s probably going to suck. In case of emergency, we got you covered!”

What are you people thinking? It’s a movie theater, not a McDonald’s Playland or Chuck E. Cheese! Show a little respect for something other than a profit margin. Don’t you want to encourage kids to grow up to be well-behaved patrons instead of a pack of vilde chaya armed with the attention span of a gnat?

When my folks took me to the movies, it went without saying that if I misbehaved, we were out the door. That kept me quiet. Once the folks let go of the reins and ceased to be my chaperone, all bets were off.

There was one particularly derelict incident that occurred during a Saturday matinee performance at Chicago’s Nortown Theater. I joined a group of neighbor kids eager and curious to examine One of Our Spies Is Missing. We took up residence in the first row of the balcony armed with newly purchased Woolworth’s squirt pistols, waited for the lights to dim, and proceeded to drop a little in-theater precipitation on the crowd below.

Once the water supply gave out, we put away our pistols and tried to focus on the flick. At the time, The Man from U.N.C.L.E., a watered down small screen ripoff of 007, was an 11-year-old's definition of must-see TV. The place was packed, every kid on the north side eager to spy Napoleon Solo and Illya Kuryakin writ large.

It soon became apparent that we were being played by the suits in Culver City. Instead of producing something new for theaters, the schmucks at M-G-M Television had the audacity to string together two episodes of U.N.C.L.E. and pass it off as a feature!

Feeling suckered in and angry, the natives soon became restless. Several in the group made a run to the water fountain to refuel the multicolored spritzers. The subsequent downpour didn’t go unnoticed. One of the wet weasels below narced on us. It marked the one time in my life where a manager personally showed me the door.

If a kid is old enough to play on a jungle gym, then they’re old enough to make it through a feature without the added allure of a playlot. If anything, I’m all about Crybaby Matinees.

To the best of my knowledge, the concept of setting aside one matinee screening a week for mothers with infant children was the brainchild of Reading Cinemas. Imported from Australia, and first implemented in 2001 at the Angelika Dallas, the theater would designate one movie for mommy-friendly matinee.

Crybaby Matinees continue to play at all three of Reading’s San Diego locations: Grossmont Tuesdays at 11:45 am, Town Square Thursdays at 11, and the Angelika Film Center Wednesdays at 11 am. Squirt guns sold separately.

They might as well add a Slip ‘N Slide, while they're at it. 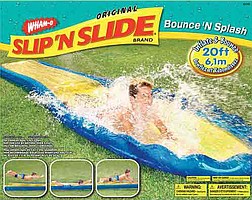 The first personal injury lawyer will shut this silliness down.

Trampoline World was very popular when I was a child. That ended when the first kid took a bad bounce and landed in the trauma unit.

I remember a trampoline business, too. I don't recall any accidents, but it didn't stay in business very long. Too many ups and downs, I guess. ;-)

I don't want to jump to conclusions, but I think there were too many bounced checks! ;-/

Plenty of Trampoline places in SD county currently being enjoyed by those young enough to remember how.

This article makes no sense. You seem to be arguing that parents should be teaching kids to be perfect cinema going citizens without needing alternative distractions. But then go on to tell us how your parents dumped you in the local cinema so you could run round annoying everyone there - maybe some of those kids in the theater knew how to behave and actually wanted to watch the movie.

On the contrary. No one wanted to watch the movie more than I. But it wasn't an original movie. It was a rerun of two television shows. I forked over 50 cents for crap that was beamed into my home for free. As soon as the gang got wise to the bait-and-switch tomfoolery, we made the best of a lousy situation.