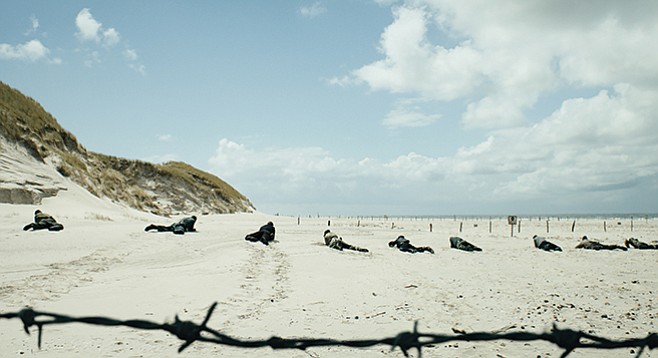 Land of Mine is terse, tense, and terrific

Writer-director Martin Zandlivet’s terse, tense, and terrific post-WWII film Land of Mine establishes two of its three strengths immediately. First, star Roland Møller as Danish sergeant Carl Rasmussen, his eyes radiating barely controlled emotion from their deep and hooded recesses as he drives his Jeep alongside a column of defeated German soldiers. Second, its theme of coming to grips with the enemy’s humanity after years spent suffering his depredations and seeking his violent destruction. Rasmussen spots a trudging German clutching a Danish flag, and after seizing it and berating the wretch, he begins to beat him. And continues to beat him. Well, of course. These are the Germans. Think of what they’ve done. Still, the poor guy’s helpless. But he had the gall to grab that flag. But that’s an awful lot of blood...

Land of Mine trailer

The tension established, Zandlivet tightens the screw: Rasmussen’s assignment is to oversee a detail of German prisoners as they work to clear a section of Denmark’s west coast of 45,000 land mines, planted by Germans in preparation for an Allied invasion that never came. It’s nerve-straining work: the mines are buried in the sand, and must be found by prodding the beach with an iron rod while crawling over already-cleared ground. The mines are, of course, built to explode, and one slip in the defusing can prove disastrous. (It’s tempting to curse the director as he brings his camera in close on a shaking hand as it lifts a sand-crusted detonator free with a sickening jerk. How can you look? How can you look away?)

And then he tightens it some more: these prisoners are barely more than children — the painfully young recruits heaved up during the Third Reich’s death spasms. They strive mightily to carry out their nightmarish task with a soldier’s resolve and efficiency. They seek a balance between stoic acceptance of their fate and subtle attempts to improve their lot. And they bolster each other’s spirits with talk of what they’ll do when the job’s done and they’re sent home. But their youth is inescapable, and even Rasmussen can’t help noticing that when they’re hurt, they call out for Mom. 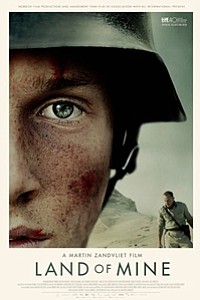 Still, he’s got a schedule, and a ravaged country to boot. So he manages to remain adamantine in the face of the boys’ suffering and starvation, even after they become violently ill from eating stolen grain that turns out to be full of rat feces. It isn’t until he sees the ugly joy of the farmwife whose grain it was (“I got some Germans, after all”) that he begins to sense the shadow on his soul — and the souls of his fellow soldiers.

But even if Rasmussen changes, the work doesn’t. The strain is terrible, and even respites are haunted by the explosive remnants of a war that has ended but isn’t anywhere close to being over. And of course, a softened heart is a vulnerable heart. The saying “no good deed goes unpunished” may ring truer in wartime than in any other; Land of Mine knows it has to go looking elsewhere for the cause of human kindness.