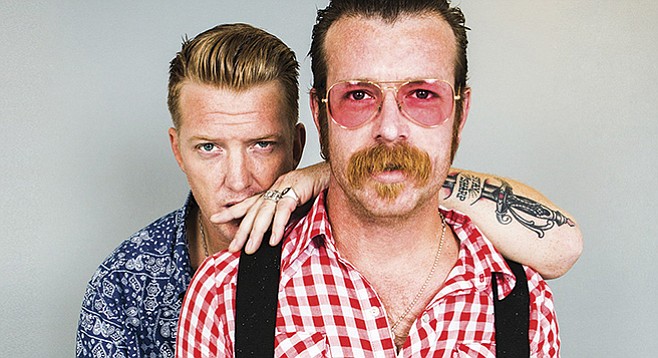 The outdoor Del Mar Summer Concert Series at the Racetrack can always be relied on for the usual reggae-flavored bro-tation of festival acts like this year’s season opener Tribal Seeds (July 21), as well as Steel Pulse (August 18) and Slightly Stoopid (August 26). There’s a real surprise this summer, however, with Eagles of Death Metal performing August 4 after the final race. Last seen locally in 2015 at the Belly Up, the group (actually more Eagles than metal) is breaking in their newest player Jennie Vee, a former Canadian-gone-Hollywood bassist/singer best known from Courtney Love’s most recent touring band. Don’t expect to see EODM co-founder Josh Homme though, as he usually leaves the live performances to partner Jesse Hughes and a roster of hired backup players. Other dates in the Del Mar series (most free with the price of race admission) feature Violent Femmes (July 28), Ludacris (August 12), Lord Huron (August 25), and the Revivalists (September 1), wrapping up with EDM star Steve Aoki (September 3). 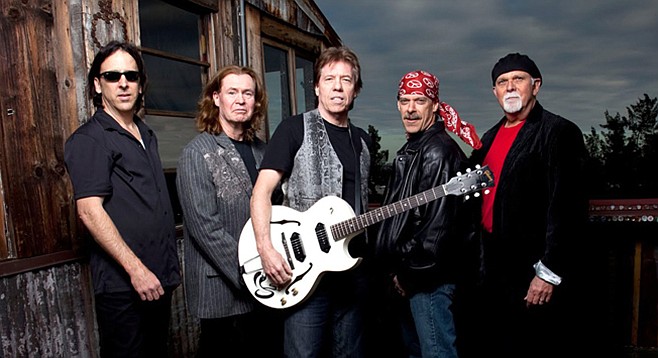 George Thorogood, one of the FM mainstays at Viejas Concerts in the Park

Viejas Concerts in the Park ain’t free (tix range from $23 to $79), but they are outdoors and the Alpine venue’s newly expanded amphitheater has gone from seating 1500 for general admission events to around 3000, attracting several notable headliners for their first concert series since 2009. Heavyweights include country acts Martina McBride (July 3), Dwight Yoakam (July 26), and Lee Brice (September 28), along with frat-boy faves Reel Big Fish (July 23) and a September 24 double bill with FM mainstays George Thorogood and Foghat. Blues rocker Thorogood recently released his first solo album, Party of One, but just to be safe he’ll be propped up by his longtime group the Destroyers. Foghat is currently touring with 71-year-old drummer Roger Earl as the sole remaining founder from their “Slow Ride”/”Fool for the City” heyday.

The members of Chastity Belt may look and dress like they’re auditioning for one of the nerdy girlfriends on TV’s Big Bang Theory, but once the Walla Walla, Washington, pop rockers take the stage at Space Bar on August 4, expect nothing but disdain for traditional girly roles and feminine attitudes. On their first two albums, they’re not so much gender benders as they are sexual satirists, with a new full-length, I Used to Spend So Much Time Alone, dropping this month. 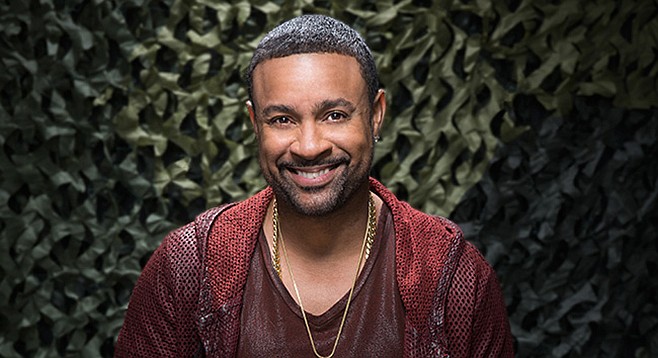 Named after a suspiciously squinty-eyed character in the Scooby-Doo cartoons, pop-reggae star Shaggy has mostly been doing collaborative songs over the past few years, with no new studio album to promote at the Music Box on September 5. Now closing in on his late 30s, not much has changed for the Jamaican-American singer since 1996’s Boombastic scored his only Grammy award, for Best Reggae Album (a category he was nominated in, but lost, four more times between 2006 and 2015). He has plenty of hits to draw from, however, including two Billboard chart-toppers (“It Wasn’t Me” and “Angel”), and it seems a good bet that enough of his five million monthly Spotify listeners live in San Diego to fill up the 700-seat room.

The recently reunited City of Caterpillar briefly ruled the early 2000s Richmond, Virginia, rock scene, releasing a split single, a full-length album, and a compilation of demos and live track. The band split up in late 2003. They’ll be supported at the Soda Bar on October 19 by Thou, a Baton Rouge sludge-metal band whose live shows are frequently highlighted (or interrupted, depending on your POV) by brow-knitted so-serious-it-must-be-a-joke renditions of Nirvana tracks like “Milk It,” “Floyd the Barber,” “Something in the Way,” and “Aneurysm.” 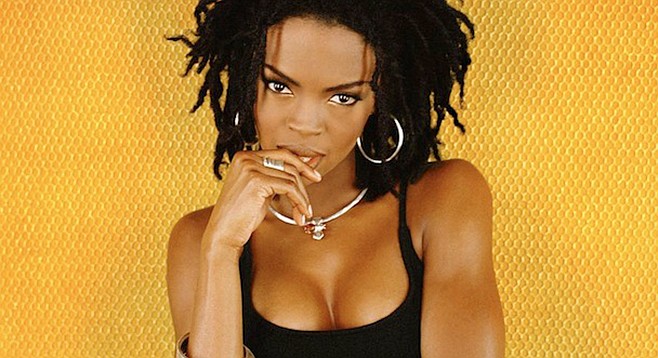 Lauryn Hill will align her energies at Open Air

When Lauryn Hill took to Facebook last year to explain how her need to “align her energies” before a concert could sometimes cause delays of an hour or more (as happened in Atlanta just before the post), even diehard fans couldn’t resist circulating memes depicting all the fanciful (and sometimes obscene) things the former Fugee might be doing all alone in her backstage dressing room. My personal favorite was the animated one of her secretly splashing water onto a mogwai Photoshopped to look like Wyclef Jean, whose backside pops off a half dozen demonic-looking party gremlins (apparently referring to Jean’s claim that Hill accused him of fathering one or more of her many kids). Hill’s October 3 date at SDSU’s Open Air Theatre will presumably be gremlin-free, but opening rapper-producer Nas has a new girlfriend, Nicki Minaj, who — if spotted on the sidelines — could easily be mistaken for a gremlin. The bill also features Hannibal Buress and Chronixx. 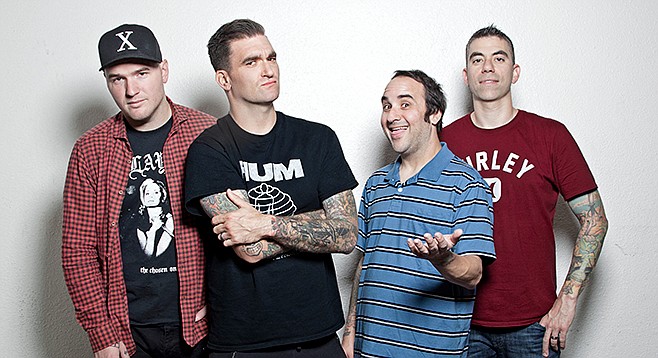 New Found Glory will be celebrating 20 Years of Pop Punk at House of Blues on November 25 and 26, performing two full albums each night from the band’s catalog. Potential selections reportedly include Catalyst, Not Without a Fight, Self-Titled, Sticks and Stones, Resurrection, and From the Screen to Your Stereo, though you’ll also likely hear tracks from the Florida-based group’s just-released ninth studio album, Makes Me Sick. There’s a video online for the lead single “Happy Being Miserable,” inspired by the blueberry-pie-puking scene in Stand by Me, that’s already closing in on a half million views. In perhaps the most throw-up-drenched film clip since Mr. Creosote exploded all over Monty Python’s Meaning of Life, onscreen guest vomitors and vomitees include members of All Time Low. 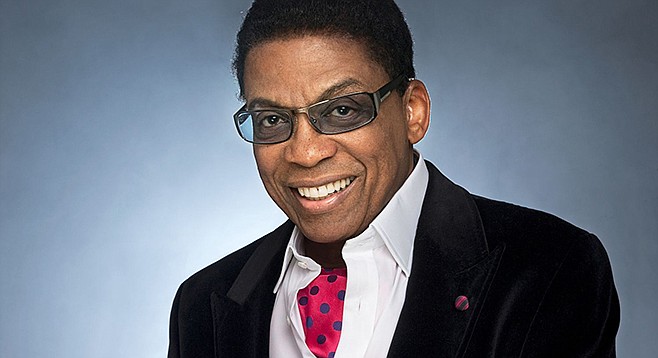 Herbie Hancock will perform at the Balboa Theatre March 7, 2018, as part of the La Jolla Music Society’s 2017/2018 season. It’s been over a half dozen years since his last studio release, but the 77-year-old Chicago jazz kingpin put out more than 50 albums between his game-changing 1962 debut for the Blue Note label, Takin’ Off, and 2010’s self-released Imagine Project, so he can be forgiven for cruising on his own fumes for this final stretch of a long and varied journey. Performers of every genre have covered and sampled Hancock tracks, a testimonial to the timeless nature of songs that rarely seem dated or old-fashioned. Great videos, too (remember the breakdancing robots of 1983’s “Rockit”?), almost none of them featuring blueberry vomit.