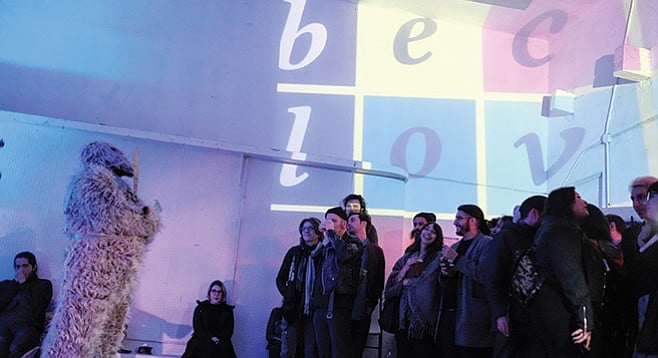 Because We Love You Fest fertilizes TJ’s subterranean scene

Friends from both Californias get together for 18 hours

Experimental music rarely goes as planned. Often, that’s the point. Sometimes, nothing happens at all. Just ask John Cage. One thing’s for sure: it’s a gamble. It’s downright audacious first-date material. Most people find it offensive, or at the least, boring. But, as Cage once suggested: “If something is boring after 2 minutes, try it for 4. If still boring, then 8. Then 16. Then 32. Eventually one discovers that it is not boring at all.”

Because We Love You Fest

A similar appreciation for prolongation seems to have inspired TJ collective Borderland Noise to curate over 35 exploratory musicians and artists from Tijuana, Mexicali, San Diego, Los Angeles, Oakland, and beyond for their third annual, 18-hour Because We Love You Fest. 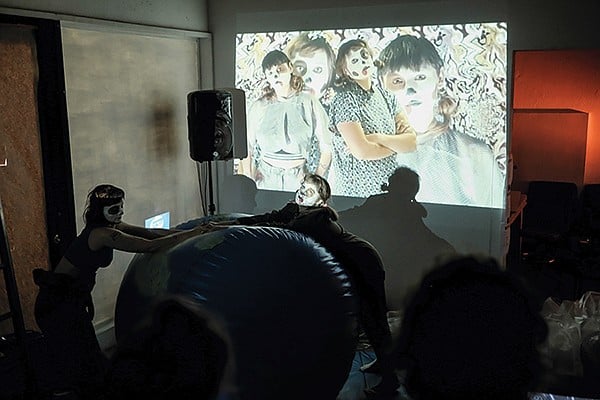 Oracle Plus from Oakland goes feral at Nett Nett.

Saturday, February 11. 3:30 p.m. Pasaje Rodríguez. Borderland Noise organizer Haydeé Jiménez (who coordinated the event with La Caja Fuerte venue owner Luis Montijo, Static Discos labelhead Ejival, and Coyote art collective) and I met at the UrbanRadioMx studio as host Ejival wrapped up a DJ set. We arranged our gear — a maze of pedals, wire, a theramin, knobs, an iPad, a mixer — to play atmospheric noise as Dagmar Midcap. Just like our eponymous meteorologist, we generally speak about our material in terms of weather. We had practiced something like Partly Sunny with a Chance of Mongolian Throat Singing, but the winds turned and we ended up with Mostly Cloudy/Tornado Warning. 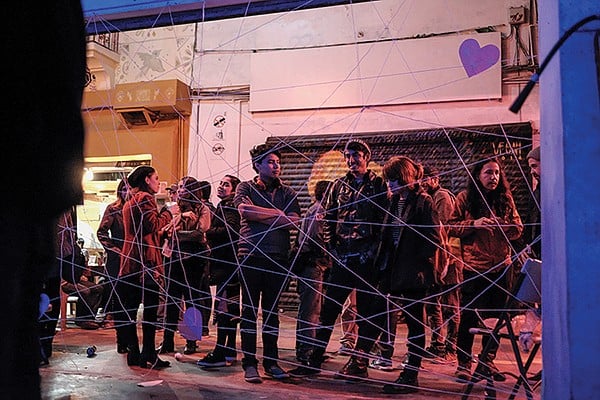 Hundreds attended the third annual Because We Love You Fest in Pasaje Rodríguez.

For continuity’s sake, I’d like to say this set the tone for the rest of the all-night affair, but for the most part, everything was a breeze. At least from where I was standing, which was admittedly quite often in Southern home-cooking joint Voodoo Stu’s, where they served a cocktail of peanut-infused cola and whiskey with floating goobers. When I finally made it upstairs to Haydeé’s office, called Nett Nett, Oakland musicians and video/performance art duo Oracle Plus were dressed up like puppies and rolling around on a giant inflatable globe. I think it was political commentary. Whatever it was, it was entirely indicative of what Because We Love You Fest is all about: friends from both Californias getting together in a do-it-yourself space to share their funky-punk performance art with each other.

Around 11, techno-shaman Rancho Shampoo took the Caja Fuerte stage and dispensed hypnotic tribal beats and soaring flutes while the yeti swung machetes at the sky. A few years ago, Rancho Shampoo released a documentary about himself living on a hilltop overlooking Tecate. It was so convincing that, until a friend clued me in, I actually believed that the musician subsisted on flowers in the wilds of a holy mountain called Cerro de la Panocha Sangrada. Which is ridiculous. But again, it prods right at the heart of the thing. Provocative, mischievous, mystic. That’s Because We Love You Fest. 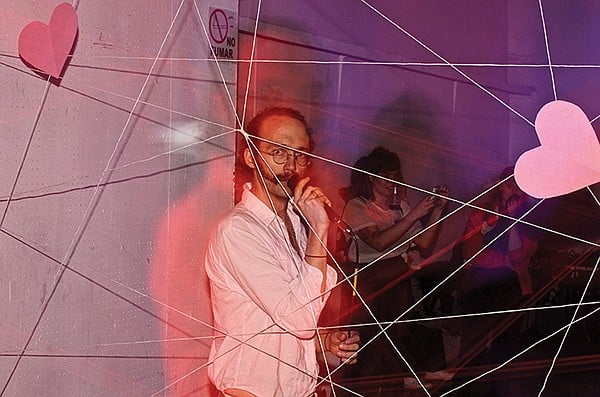 Daby MCs at La Caja Fuerte. His set as Some Pepper was cancelled after cops crashed the afterparty, so he made up for it few days later with a live broadcast from UrbanRadioMx.

The well-attended event is indicative of the fertile subterranean art scene in Tijuana, where a handful of friends with a shared vision can scrape together a few hundred bucks, renovate a dusty office space, and throw all sorts of wild parties without the prohibitive rigamarole of permits and crippling rent. DIY is alive and well in Tijuana. 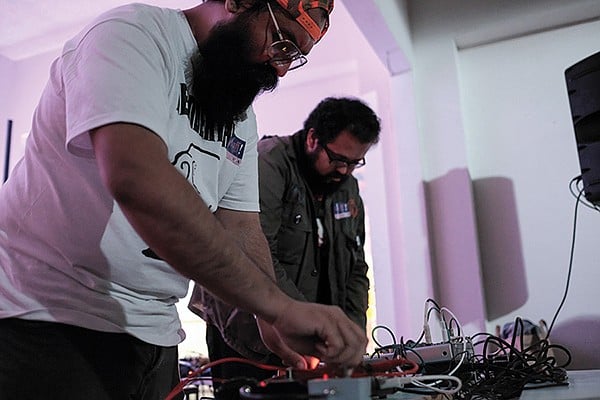 The next morning, I met up with Haydeé at Nett Nett.

“The gate schedule got messed up and the cops shut down the afterparty,” she said, appearing less distressed than the statement would suggest. She looked as though she had just summited a great mountain: immortal and aloof to the mundane irritations of life. Maybe she was riding a similar wavelength to Cage when he posited, “A ‘mistake’ is beside the point, for once anything happens, it authentically is.”