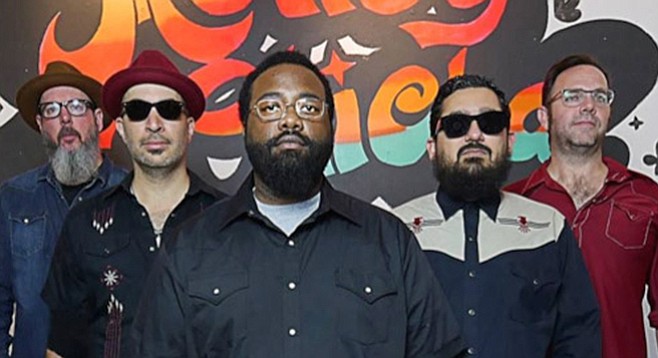 Shows coming to San Diego in the new year

Imagine that ’60s acid rockers Strawberry Alarm Clock were actually a South American cumbia band based in the epicenter of weird, Austin, Texas, and you either just imbibed a mind-expanding drug or you’re listening to the psicodélico sound of Money Chicha. The fuzzed-out percussion-heavy ensemble specializes in an irresistibly danceable variation of South American “chicha” music, a funky somewhat afrobeat sound out of Colombia and Peru blending Latin beats with surf guitar and psychedelic jams often based around the folk songs of indigenous people in the Andes mountains. Players include Adrian Quesada (formerly of Grupo Fantasma, currently with Brownout), along with Beto Martinez, Greg Gonzales, John Speice, and Matthew Holmes, all vets of the same two bands. Last year’s Money Chicha full-length, Echo en Mexico, earned the band almost universal acclaim, solidifying their place among top-shelf touring acts such as Ozomatli, Maná, Los Amigos Invisibles, Caifanes, and Chicano Batman, the latter being the closest and best RIYL/Recommended If You Like that I can think of for Money Chicha. Their March 1 appearance at Soda Bar will probably be your last chance to catch such fast-rising stars at the beginning of what’s sure to be a sharply upward career trajectory, for a bill that includes a funky cumbia band out of L.A. named La Chamba and a psychedelic Latin group from Chicago called Dos Santos whose newest EP, Fonografic, was produced by Money Chicha’s Beto Martinez. 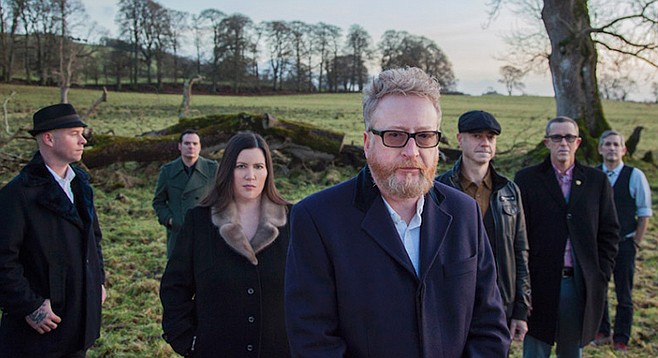 Celtic barroom punk rockers Flogging Molly (whose local contingent once operated a Carlsbad rock club, Hensley’s Flying Elephant, later known as Stag and Lion) had one helluva 2017. They scored several radio and streaming hits with their first studio full-length in six years, Life Is Good, released in June via Vanguard Records and recorded in Ireland with Grammy-winning producer Joe Chiccarelli (U2, Beck, White Stripes), including “The Hand of John L. Sullivan” (which preceded the album by almost a year) and “Reptiles (We Woke Up).” The latter track came with an animated video directed by the band’s longtime friend Richie Smyth, who did similar work for U2 and the Verve, featuring a marching army of suit-wearing, guitar-playing lizards interspersed with band-performance footage. Always canny in their marketing, the group courted high-profile tastemakers by offering exclusive advance posts of new tracks to sites such as Brooklyn Vegan (“Welcome to Adamstown”), Consequence of Sound (“The Days We’ve Yet to Meet”), and of course Billboard (“The Guns of Jericho”). It’s this sort of savvy 21st-century self-promotion that has kept the group perpetually on the road and atop the waves (for their annual multiband cruise) ever since first forming a little over 20 years ago, with a March 14 date slated for Observatory North Park, near the end of a tour that wraps in April with the next Salty Dog Cruise. 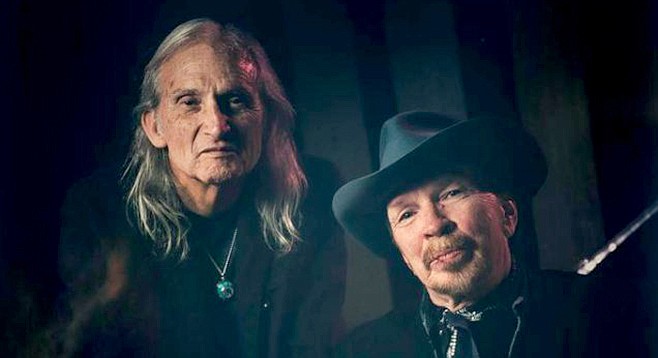 If one were asked to pick the one man most responsible for keeping countrified roots music alive and vital, one generation would probably cite once-and-future Blasters mainman Dave Alvin, while another is just as likely to champion longtime prairie icon Jimmie Dale Gilmore, whose musical career dates back more than 50 years. Alvin, who grew up in Downey and was schooled in Long Beach, has a lengthy history of burning down area venues, from AMSDconcerts in National City (where he played earlier this year) to the Belly Up and all notable points in between, including the Casbah, House of Blues, and Viejas. Texas country-western pioneer Jimmie Dale Gilmore hasn’t appeared on a San Diego stage since early 2012, when he was plugging his Heirloom Music album with bluegrass backing crew the Wronglers, featuring both early-20th-century folk covers. Gilmore (twice named Rolling Stone’s Country Artist of the Year) hasn’t done a lot of recording since then, though he’s often seen playing around his Austin home and occasionally touring with setlists heavy on tunes from his ’70s band with Joe Ely, the Flatlanders, which still occasionally reconvenes. Alvin’s newest full-length dropped in 2015, Lost Time, a collaborative reunion with brother Phil Alvin, and it wasn’t until the following year that he realized he and Gilmore, though friends for over 30 years, had never performed together. To remedy this, the duo has been staging some amazing sets, many immortalized on YouTube, tackling each other’s originals as well as covering everyone from Sam Cooke to Willie Nelson, Merle Haggard, and the Youngbloods. If the recent clips online are any indication, songs they might trot out at the Belly Up on July 25 include “Abilene,” “Marie Marie,” “Deportee,” “Stealin’,” and “King of California.” 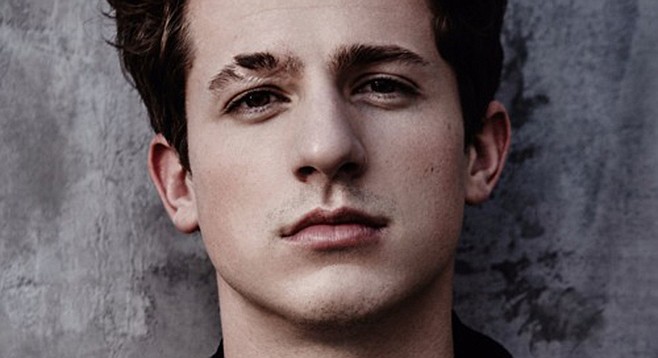 Pop singer Charlie Puth is already beating the drums for his upcoming album via Atlantic Records, VoiceNotes, with a new single called “How Long” that he just performed on The Voice season finale and will reprise for this year’s Dick-less holiday countdown, Dick Clark’s New Year’s Rockin’ Eve. The track has earned around 300 million audio streams, with a related YouTube video currently clocking in at around 160 million views, all impressive numbers mirroring the success of his earlier single, “Attention,” which he’s also scheduled to perform on New Year’s. The video for “Attention” is showing around 638 million YouTube views, and there’s no space to list all the countries where it either topped a chart and/or has been certified platinum, as well as achieving “diamond certification” in France, which apparently means ten million or more sold. I mention the stats to illustrate the obvious popularity of Puth’s first new music since his 2016 debut album, Nine Track Mind, which reached number five on Billboard’s Hot 100 chart, though I’m hard pressed to explain what differs Puth from Nick Jonas, Justin Bieber, Shawn Mendes, Greyson Chance, Cody Simpson, and any number of other ’tween troubadours whose photos we could have run in place of Puth’s without anyone over 19 noticing or caring. He’ll likely have a full house at Mattress Firm Amphitheatre on August 20, where the bill includes pop singer Hailee Steinfeld, whose hits since 2015 include “Love Myself,” “Starving,” “Most Girls,” and her new single “Let Me Go,” currently ranking in the top 20 of Spotify’s Global Top 50 chart.