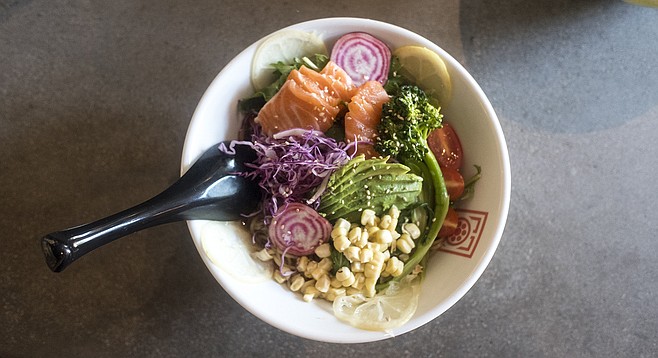 Warming up to cold noodles

Sashimi topped ramen may be the perfect summer dish

My ramen consumption has been down. Not because I'm over it, and definitely not for lack of availability — Yelp tells me I have roughly 300 ramen choices within a 15-minute drive. I've just been eating less because it's been hot. 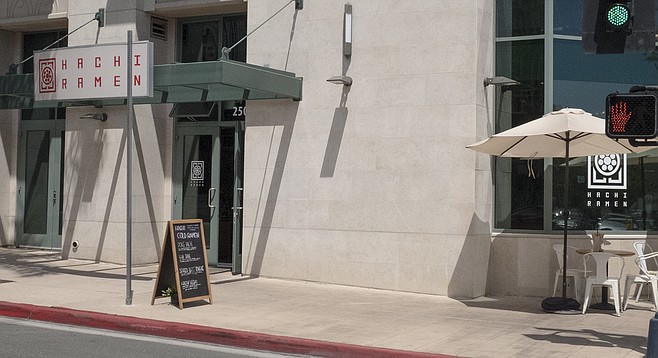 That's where Hachi Ramen comes in. The Bankers Hill restaurant opened earlier this year in the space briefly occupied by Artisan Bento, a gourmet bento box concept that almost but not quite hit the spot.

Hachi reportedly retains the same ownership, Shihomi Borilloa, a managing partner at nearby Azuki Sushi. And while the ramen specialist offers a bevy of ramens ready to compete for my noodle affection — including one with roasted duck and fois gras oil, and another featuring mixed seafood in a cod and bonito broth — it serves a secret weapon to bring me back into the fold this summer: cold ramen.

Usually, the thought of cold soup would repel me, but with my car thermometer peaking just about 90 degrees, I thought: the colder the better.

Four kinds of cold ramen are offered, including one with seared beef tongue and another with sesame miso and peppered chicken. The Shirunashi Poke Men sounded pretty good; stacked with raw ahi, albacore, and salmon, it's a poke salad on served on top of noodles. But there's no broth, and I wanted to test the idea of cold broth.

So I went for the vegan option. For $9.50, it's cold shoyu broth with noodles, broccolini, avocado, yuzu, corn, chioggia beets, cucumber, cherry tomatoes, and mizuna greens. Already, is sounded intriguing, but I went ahead and de-veganized it with a $2 add-on: salmon sashimi.

Stop to think about this a moment. There's no way I'd order hot ramen with avocado on it, let alone raw fish. But this is the world cold ramen invites. And I loved it.

This was basically like eating a great salad over noodles, in a bowl of light soy dressing. It hit the sweet spot on the Venn diagram between refreshing, satisfying, and healthy.

While the duck ramen didn't turn out quite as amazing as I hoped it would, the only thing that would stop me from trying it again is the massive ramen competition Hachi faces in nearby neighborhoods. But near as I can tell, cold ramen's still limited to one or two other spots in different parts of town, like Menya Ultra in Kearny Mesa, and Pacific Beach's Izakaya PB. For those of us anywhere near Balboa Park, I can recommend going cold this summer at Hachi Ramen.