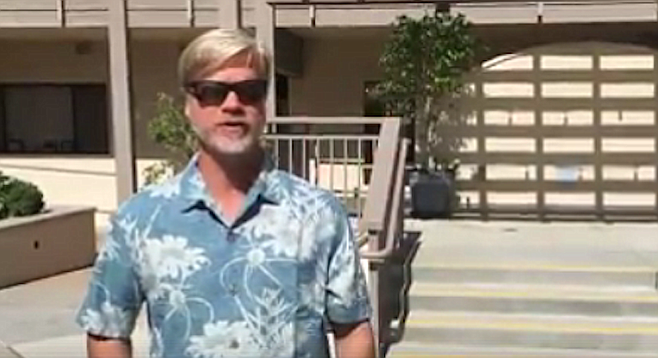 A former associate pastor at the Rancho Bernardo Community Presbyterian Church is suing the church and it's new pastor Bryan Stamper for sexual harassment and for terminating her after she complained to church administrators.

Dawn Neldon was hired in 2008 to serve as a youth minister. After a number of years working for the Rancho Bernardo Community Presbyterian Church, Neldon was promoted to a "minister of missions and serving" position inside the church.

In March 2017, the church named Bryan Stamper, a pastor from Texas, as its new head pastor. That same month Neldon and Stamper, along with other church staffers, took a bus to a conference in Irvine, California. During the ride, Stamper sat next to Neldon. He told Neldon about a former parishioner, an older lady, who, according to the complaint, liked to grab "his butt every time he saw her." He said he was happy to give her that little thrill.

The story, in addition to his flirtatious behavior, made Neldon uncomfortable. Later at the conference, Stamper addressed Neldon as "honey, baby, and sweetheart." During the ride home Stamper approached Neldon and compared his body to a "Lamborghini" that "couldn’t be kept in the garage."

According to the complaint, Stamper's comments made Neldon uncomfortable.

The alleged harassment continued. Examples include Stamper asking Neldon to dance with him in front of the entire congregation during his first official sermon, commenting on her clothing, kissing his biceps and calling them "pythons."

In another incident, Stamper ran up to Neldon singing a song from Grease and trying to dance provocatively with her. Neldon would raise her arms in order to avoid touching him.

In May 2017, after numerous other inappropriate interactions, Neldon filed a formal complaint to church administrators. She approached Stamper with her complaint. According to the August 7 lawsuit, Stamper offered a "meager apology" but did nothing to correct the behavior.

In August 2017, Neldon was placed on administrative leave. Days later, after nearly ten years as a youth pastor, she was forced to resign.

Neldon is suing Stamper and the church for sexual harassment, retaliation, wrongful termination, and failure to prevent retaliation and harassment.

Neldon's attorney Dan Gilleon says the church needs to be held accountable, "Like many of my female clients, Minister Neldon is working in a male-dominated industry that, in many ways, is no different than other employers who simply refuse to accept that discrimination is illegal in America. It's a shame. You'd think a business that claims moral superiority would behave better. Minister Neldon will pay a price for speaking out, as is the case for many women who blow the whistle. But, true to her word, my client is thinking of the other women out there who might benefit once it finally sinks in for employers that civil rights will be enforced in the courtroom."

It is far from certain, but I assume that the congregation of that church is predominately older and very conservative, generally retirees. So why was this cool, "surfer dude" type of guy, with his casual attire and facial hair, hired by the congregation? There must have been a reason for it, and now that the woman youth pastor has filed suit, will the church board members take another look at their choice? They should.

I am sure that they prayed and God sent them the "surfer dude". LOL

This seems a bit like a vendetta. Comments taken out of context can sound very different from the original intended meaning. Dancing in front of the congregation during a celebration sounds a lot more like enthusiasm. He seems quite young and if he is the type of person to hug his congregation members, that does not mean he is making advances. If comments were made that made her uncomfortable, then why not tell him, right then at that time? A youth Pastor has to be able to speak up to the youth and others, after 10 years she should have a firm foundation, and the confidence to do so. Sexual harassment is easy to claim... Especially, when there is no one who can verify.

You're the problem. There were plenty of people able to verify. It sounds like a predator. Read about "grooming"---I'm sure Pastor Bryan was just getting started with Dawn. He's probably been on his best behavior for a few years while this lawsuit went on---but he'll have a hard time keeping his mouth shut. By then the church will be renting out rooms to anyone who will give them money so they can keep paying his salary and the building utilities.

Sara it is sad, and even more sad if it is untrue.

My family and I have been attending RBCPC for over 15 years. We don't know Dawn Neldon personally, but judging her based on everything she has done for this church, the local community, and in missions abroad, we believe that she is a person of solid moral character who is genuinely passionate about what she does. Bryan Stamper, on the other hand, comes across as a vain showman. God is a business for him.

The RBCPC elders and Stamper have ruined this church. They have gotten rid of the people that made it such a wonderful place for us-- Ryan Ross, Neal Nybo and Dawn Neldon.

Church like every organization, has people that rise to the top because they want power and control.

This case was withdrawn by Ms. Neldon's attorney and Dr. Stamper also removed as a defendant for this lawsuit. It is one thing to allege something, but it quite another thing to provide proof that would stand up in court. Under California law, civil suits must first go to madatory settlement conference. In that conference, the mediator ruled that Ms. Neldon had a very weak case. The church then decided to allow the case to go forward to trial. The next step in the case was the discovery of all the evidence for this case. After Ms. Neldon's attorney reviewed the case, he realized that even if a jury found for his client, a result that was remote, the amount of money recovered in damages would not cover the cost of litigation. In fact, it was more likely that the case would result in a finding of innocence for the church and Dr. Stamper. This result was a result that any law firm would be willing to risk. Her lawyer decide to work with the church's insurance company to give Ms. Neldon an undisclosed amount as a severance for losing her position as an employee. As stated earlier, Dr. Stamper was remove as a defendant and then the suit was withdrawn by the the plaintiff lawyer.

RBCCFriend should not use an anonymous moniker. In my opinion, his/her response is that of a lawyer.

I'm not hiding behind any anonymous name. I was there. I was an Elder and a long time member and Elder at another large San Diego Presbyterian church.

In my opinion, the current leadership has surrounded itself with legalistic Pharisees.

Again in my opinion, this church is currently unsafe for families. Drop me a note if you want more info. WendyH

This situation completely breaks my heart. I too know Dawn Neldon and she is an incredible human being and leader. There isn't a chance in hell that she would falsify any of this information or make up a story about this "pastor." Listen. Pastoral leadership is a magnet for a narcissistic leader. Unfortunately the way that the American church elevates pastors to stardom invites this behavior and personality to thrive in this environment.

The other thing that's so appalling (and we see it daily in the news) is how frequently churches cover over abuse. Believe the best. Move on in the name of "protecting the church."

Friends. The church IS people. Protecting the church? The way you do that? You build a barbed wire fence around your church and keep predators OUT. Even and especially when they go by Reverend or Pastor. THAT is how you protect the church.

Dawn Neldon was abused by her congregation that raised her, employed her and called her their friend. Unfortunately, this group of people who claim to follow Jesus and want the Kingdom to be here on earth took the side of a man they barely knew (who was still on probation by the way and could've been easily dismissed) and abandoned a woman they had known for over a decade. It's shocking to me because Dawn's reputation and integrity speak for themselves---stellar and trusted.

No one protects the Church when they allow manipulative narcissists to stay in their pastoral senior pastor roles preaching a fake gospel for a whole lotta cash and advantages. They get a pass---and the abused? They are silenced. This is not Jesus. This is not the gospel. Many will leave the faith and the church because "leaders" protect abusers.

Dawn Neldon was and is brave. Braver than many. I'm so proud of her.

I would be willing to guess there are others that this man has harassed. You don't wake up one day, start working at a new church and out of the blue start flirting with and grooming the youth pastor for the first time ever. That's patterned behavior. Just wait. Keep your eyes open, church. Be careful who you're loyal to---you might just find yourself on the wrong side of the story.

You know what would've saved this church from decline? Honest examination. Humility. And the Elder Board's willingness to say: "Oh crap, we hired the wrong guy. You need to go back home to Texas. We won't allow that behavior here."

My guess? After three years of the Holy Grease Lightening Grinding Reverend Bryan dismantling a wonderful church community? There are many wishing they could rewind the tape and change the story---but then again, pride is a liar.

Matthew 24: 10-11 "At that time many will turn away from the faith and will betray and hate each other, and many false prophets will appear and deceive many people."