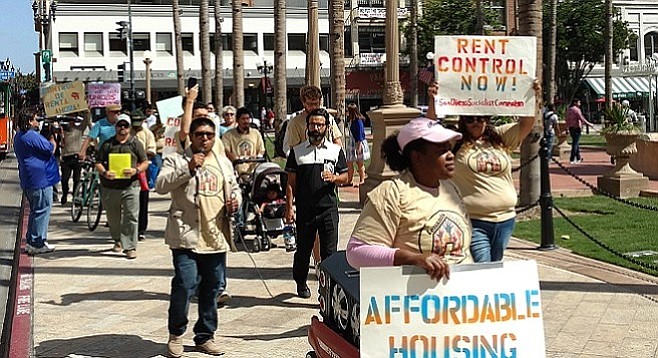 Advocates for the implementation of a rent control policy joined the like-minded in 45 other cities nationwide, taking to the streets of downtown as part of a national day of action on Thursday, September 22.

"We need to implement controls that allow us to get access to housing, and to increase protections for people living in substandard conditions, which is really prevalent in America's finest city," said Rafael Bautista, a local real estate broker and organizer with San Diego Tenants United. "We have slums with water leaks, mold, cockroach infestation, holes in floors, so many issues that are being neglected.

"Citywide, the rent is so high that it's displacing people either out of the state or out into the streets," Bautista continued, citing figures estimating the average rent countywide at $1743 monthly. 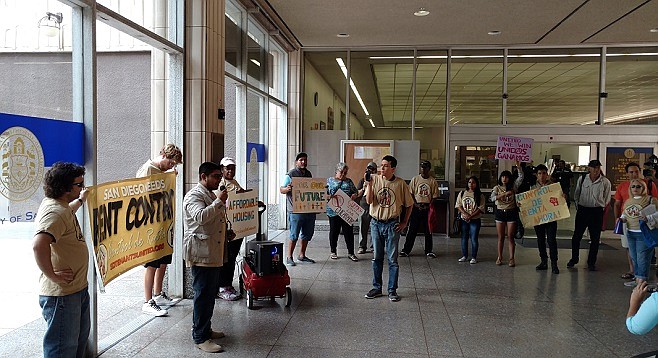 The group is circulating an online petition, which as of Friday afternoon (September 23) had just over 4600 signatures supporting rent control measures.

"Policies we need are to limit rent increases to consumer price index increases, to establish a rent control board for handling disputes rather than going through the courts, and stronger code compliance, because currently the department is underfunded and understaffed with just six workers throughout the city," Bautista continued. "We also need to make sure that there are no evictions without good cause — you can't just have people being kicked out of their homes so a landlord can rent the unit out again at a much higher cost, or in retaliation for reporting unsafe conditions."

A release announcing the day of action was more ambitious, calling for "a freeze on all rent increases, the establishment of a national livable rent standard to restrict rents to 30% of a family's income," and the "transfer of vacant, foreclosed and underused land to community control through community land trusts and cooperatives to meet the needs of communities of color and working class communities."

Bautista joked that while many in his movement might be supportive of such policies, the greater immediate need was to focus on actionable items to bring more immediate relief to tenants facing hardship.

One of those tenants who spoke at a brief rally along Broadway before the group marched to city hall is Charles Oakley.

"Rents are just sky-high everywhere, it doesn't matter if it's City Heights or El Cajon," said Oakley, who was forced from his longtime home by a drastic rent increase and unable to find suitable alternative housing.

"I've tried to get access to subsidized senior housing (holds applications) I'm on about 20 different waiting lists that involve a wait of between two and ten years," Oakley continued. "I'm not poor. I

do have assets, I have money in the bank, I can pay rent. But landlords are demanding income — I offer to show them bank statements, to pay several months in advance, but they won't do it. I'm retired ; even though I'm waiting to collect Social Security it won't cover twice the rent that they want to see. It feels discriminatory."