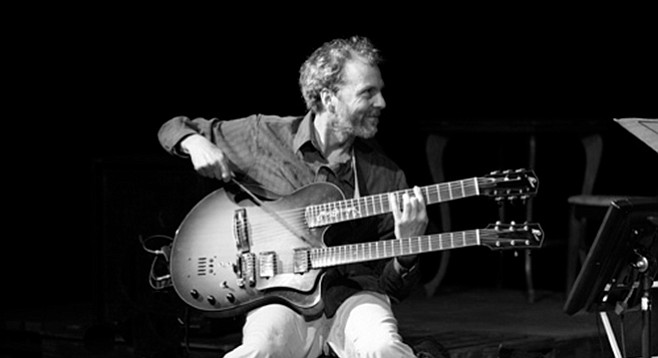 Sprague will be joined by vocalists Leonard Patton, Nina Francis, and Gregory Page at Java Joe's on Sunday

Peter Sprague alone on the small stage is enough. But double down by putting the show in an arts venue where there is no bad seat, and add Leonard Patton, Nina Francis, and Gregory Page to the mix...the concertgoer might worry about stage-crowding, but no matter. Bigger bands have occupied less real estate, and besides, the Sprague-Patton-Francis-Page bill approaches the kind of show you’d only see at a place like Largo in Los Angeles.

The players: a Thornton School of Music/USC grad, Nina Francis has got a little Nora Jones thing working around the edges of her own respectable bluesy singing. Most all local critics have used words like “arresting” and “promising” to define the born-and-raised San Diegan’s work thus far.

Has Gregory Page always been with us? Almost. The singer/songwriter/cabaret performer was a member of the Rugburns in 1994, and later found his sweet/sad jazz voice alongside Tom Brosseau in the American Folk Singers. Said to be a rock star in the Netherlands now, Page divides his time between Holland and San Diego.

Leonard Patton’s like a Kevin Mahogany, but with no off switch. He can lay right in the jazz pocket, or he can blast out of it with a shot of raw emotion, like an R&B singer or a Baptist preacher. A preacher, that is, who scats like there’s gonna be no tomorrow. He’s gigged in the past with Peter Sprague, as has Nina Francis.

To peg Peter Sprague a pure jazz guitarist is understatement, even though he was outed as such by the jazz critic Leonard Feather in 1984. Sprague’s fluent in a vivid assembly of classical-folk-Latin fluid interpretations that date back to the days when he started the Dance of the Universe Orchestra in 1978. He is by now possibly his own genre.

As for the sum of the parts: you want fresh? I think this is it.