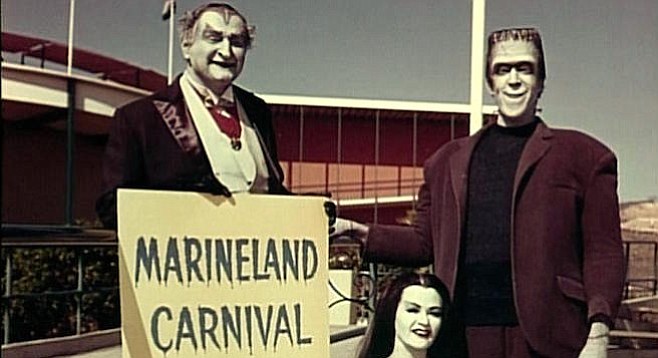 November 2, 2016 will go down as a good day. The Cubs won the World Series, this proud papa’s built-tough 1994 Ford Ranger, for five years the apple of my eye, studied hard and passed the smog test, and the following tweet from @PopColorture arrived: “I saw an article from 2011 and you mentioned looking for the Munsters Easter Special. It has been found.”

Easter Sunday was always a big simkah in the Marks household. Mom would glaze the paschal ham while dad hid multicolored Rit-dyed eggs inside our year-round sukkah. After the festival meal, I gathered around the set while Babe and Larry sat all lovey-dovey in the kitchen sipping Manischewitz and biting the heads off pastel Peeps.

Memories of the original broadcast were a blur. What do you want? It’s been over 50 years since the show last saw the light of day. The closest fans came to rekindling a memory were a pair of commercials housed on The Munsters DVD collection.

Promo for The Musters at Marineland Carnival, 1965

The copy appears to have been duped in a bathtub located in Grandpa’s subterranean laboratory. Steeped in vinegar syndrome and fuzzier than a gangrened peach, portions of the print have disintegrated through time leaving giant white shards where image used to be. Deal with it.

Not that a pristine 70mm bump-up would have made much difference. Any similarities between The Munsters and this 60-minute commercial for Marineland are coincidental. Located at the tip of the Palos Verdes Peninsula in Los Angeles County, Marineland opened its doors in 1954. Thirty-three years later SeaWorld purchased the popular aquatic theme park and moved the tanks and their contents south.

Marineland agreed to host the spectacular under the stipulation that taping would not disrupt business. This accounts for the show’s opening being filmed against the breathtaking backdrop of the facility parking lot.

Here’s the hook: Herman and Marilyn want to buy Eddie a pet — preferably an octopus or electric eel (aka sushi) — for family pet, Spot. Grandpa heard through the ghoulvine that Marineland of the Pacific was a fish store. The rest is comic gold minus the laugh-track. 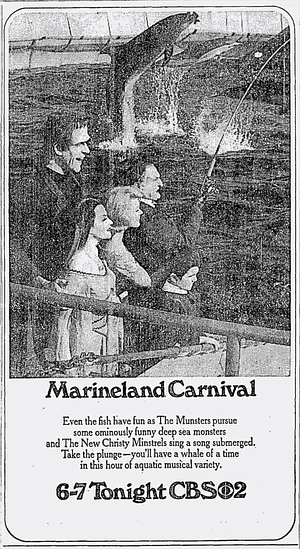 According to Pop Colorture, “The special was written and produced independently from Universal’s writers and production team, and due to contractual agreements with Universal, CBS actually booked The Munsters, so the actors’ names do not even appear in the credits!”

As though lit by the combined radiance of Helios and Apollo, it’s disconcerting to observe these customary creatures of the dark cavorting in achromatized daylight. Even more troublesome is the absence of Munster auteurs, Joe Connelly and Bob Mosher, the same boys responsible for Leave it to Beaver. Minus their combined touch, the patter quickly turns to variety show schtick interspersed with flat musical numbers from the New Christy Minstrels and an uncredited daredevil act.

Doubling for Al Lewis, a stuntman dons Transylvanian tweeds, takes to a flexible flagpole, and proceeds to devour a good three minutes of the running time swaying back and forth.

Eddie and Marilyn take their place in the bleachers among the paying customers to watch the show. And what a show it is! A Marineland cyborg stands at the foot of a poolside stage and proceeds to put dolphins, walruses, seals, and other marine life through their paces. The only thing more torturous than the treatment of the aquatic stars is the tortured monotone delivery by the show's emcee. 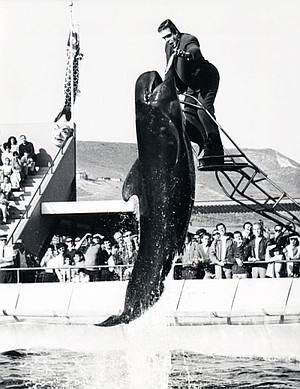 Herman has Bubbles eating out of the palm of his hand.

Other than cast members, the only recognizable name in the credits was musical director Les “Bob Hope’s Bandleader for 147 Years” Brown. Good luck trying to keep your tootsies from twinkling during the opening and closing credits.

The embryonic infomercial climaxes with Herman planting his size 27 EEEs on the diving board and dangling a piece of bait, waiting for Bubbles the Whale to leap and devour. This is immediately followed by Grandpa and Eddie leading a bloody Taiji dolphin drive hunt similar to the one seen in the Academy Award-winning documentary, The Cove.

You'll find the complete show along with a bounty of terrific backstory by Zach Smothers on Pop Colorture.