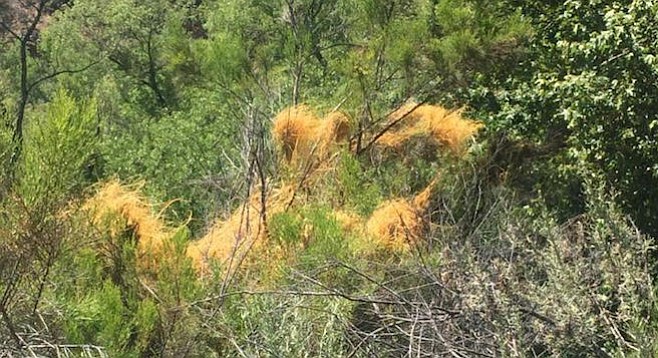 Hikers at Mission Trails Regional Park have noticed the yellow spidery moss that covers the tops of lots of plants in the park. Bridgette and Rachel wondered if the moss was spreading and perhaps dangerous to the park's vegetation. Bunny, another hiker, spotted it at Lake Murray and asked if anyone knew about it. Not even some of the lake's staff knew exactly what the seemingly invasive growth was called or if it was threatening other plants.

After the hikers made a visit to the Mission Trails Visitors Center on May 11th, the volunteer staff and ranger Chris Axtmann helped solve the mystery.

The moss is called dodder and is in the morning glory family. It is a parasite that "feeds off of the host plant" but is not considered noxious. That is how the plant is kind of mysterious: even though it does feed off another plant, it does not kill it. Dodder only takes what it needs and the plants coexist. The dodder finally dies off and the host plant recovers.

Axtmann said that people were noticing it and asking a lot of questions this year because there is a lot more of it. The reason for the abundance of dodder is because of the rainfall. She said that dodder is also called "witch's hair,” arising from local indian folklore.

According to Axtmann, the Kwaay Paay medicine man was angry at the girl and turned her beauty into an ugly witch with stringy yellow-orange hair. The young girl who was called Kwikwi after she received her curse did not know that she looked like a witch until she went to see her reflection in the pond. When she saw her reflection, she ran to hide herself in the forest and that is why her hair is on the plants.

This stuff has come and gone for years.