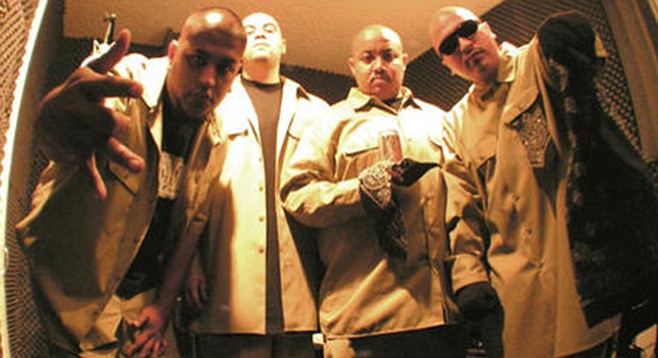 This week’s new releases include the Reactants EP from Andrew Mauro’s project Transpirations, as well as the Parker Meridien EP by Parker Edison (Parker & the Numberman), and the self-titled debut full-length from Mittens. A new EP by Ocelot, whose singer Stephanie Brown just sang on Gregg Allman’s upcoming record, debuts at the Belly Up on Thursday, March 31, on the same day that Blink-182’s Dude Ranch LP is reissued on audiophile 180 gram black virgin vinyl. Flogging Molly’s first new song in five years, “The Hand of John L. Sullivan,” honors the Irish-American heavyweight boxing champion.

The Gloomies will follow up last year’s debut single “LSD” with the Blackout EP, due April 1 via Thrill Me Records. “A lot of friends who heard ‘LSD’ first might be surprised by Blackout,” says singer Andy Craig. “But it was important to me that these songs come out now and together on this record.” Lead single “Bleached Out” is now available.

Hip-hop trio South Psycho Cide will be at downtown’s Beer Company on April 2 to drop their long-delayed album Tha Repidemic, mostly recorded years ago with their late collaborator Nick Pizana (aka Big Yikes), who passed away from cardiac arrest in 2009 after a bout with pneumonia.

“He is speaking from the grave,” says Charles Quimiro (aka Cookoo). “We held on to the whole unreleased album until now.... We actually had the vinyl version waiting, already printed years back.”

Outtakes: On April 9 at the Tower Bar, Brazilian/American rockers Midnight Track [http://www.sandiegoreader.com/bands/midnight-track] will premiere their Don't Be Proud Of Me album, recorded, mixed, and mastered by Jeff Forrest at Double Time Studios in El Cajon. “We’ll be playing all the songs that are on the album, plus some new ones,” says bassist/singer Ricky Scapini. The bill also includes Strangely Strange, the Hathcocks, and Kitty Plague.

Sometimes Julie’s [http://www.sandiegoreader.com/bands/sometimes-julie] new lineup debuts on their six-song Bright Side Of the Line EP, due April 26 with a single for “Emily” already released.

This is a very special album, the whole world is about to feel something they never felt before. SouthPsychoCide Fo' Life!!!!