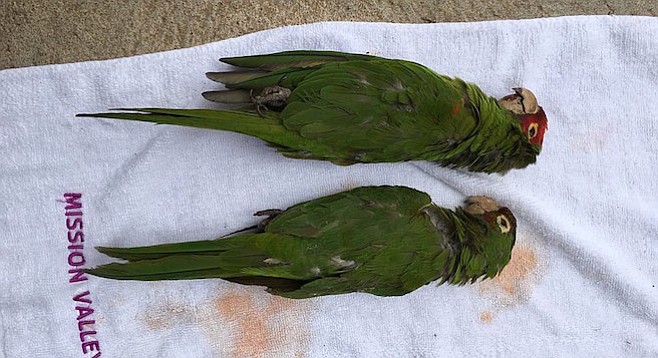 Still not enough evidence to file charges against anyone

On March 27, two near-threatened red-masked conures were found dead at All Souls' Episcopal Church on Catalina Boulevard in Point Loma.

While it’s too early to tell if these are the latest parrot sniper victims, according to Brooke Durham of SoCal Parrot, it’s rare to find two dead parrots at the same location without some sort of human involvement. If the cause of death is confirmed to be from a projectile, these parrots will be victims six and seven in the saga that began February 19. 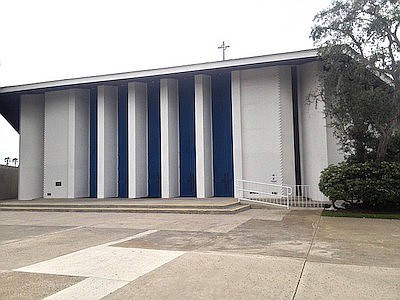 On March 28, Jen Carter said about Easter Sunday's events, "A little old lady found the two dead parrots on Sunday in front of the church around 7:30 a.m. She was very upset and delivered them to the fire station down the street. The Department of Animal Services was notified about these birds yesterday and never came to pick them up. I went over to take photos in the morning. 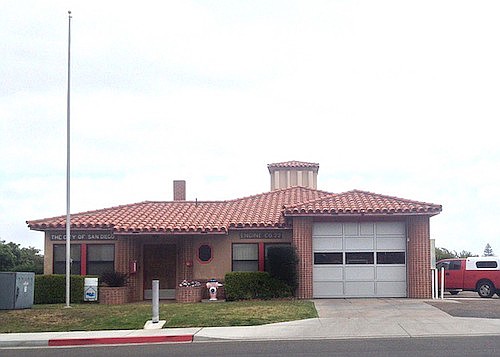 “Later in the day, I got a call from the fire station saying that animal services never showed and that the parrots were going to be left out in the parking lot in a bag. I decided to pick them up to keep them from getting dragged off by an animal. The crime scene was not disturbed as the birds weren’t killed at the fire station."

Dan DeSousa of the Department of Animal Services said on March 28 at 2:00 p.m, “At this point in time, we’re aware that two more parrots were found on Sunday. When we responded to pick them up, a private person had taken them from the fire department so we are still trying to track those animals down, which we would consider to be evidence.”

On March 28 at 4:45 p.m., I spoke with Lisa Jenkins of the Avian and Exotic Animal Hospital on Morena Boulevard as animal services was picking up the parrot remains from them. Jenkins confirmed that their hospital didn’t do a necropsy.

Thirty minutes later, DeSousa emailed to say, “I cannot emphasize enough that these birds would be considered to be evidence and the removal of the birds is tantamount to tampering with evidence and seriously impacts the ability of our department to conduct its investigation. Any criminal case filed as a result of an investigation could easily be contested in court as the chain of evidence would have been broken by the outside group.”

Carter said, "The evidence would've been compromised had I not transported them to the hospital before they decomposed further. The bodies had been sitting in the heat all day waiting for animal services, and if they hadn’t been transported to the fire department, they most likely would've disappeared."

DeSousa said that they still don’t have enough evidence to file charges against anyone.

“While people in the community may have their suspicions, those suspicions are not enough to pursue a criminal case,” said DeSousa. “This case relies on someone in the community that has overheard someone bragging about the shootings or has witnessed someone discharging the weapon. With that information, we should be able to obtain a warrant to search the suspect’s residence in an attempt to locate the weapon and ammunition and, at the same time, interview the suspect.”

That's about the same sort of response I used to get from Animal Services when we lived in San Diego; i.e. none. Over the years I lost count of the number of times I called to report dogs running loose in the neighborhood. Just typical of the "do nothing" city government of San Diego.

It's too bad the animal hospital didn't do an x-ray to see if there were any pellets in the birds. That would have possibly been helpful as evidence if ever needed. This situation is really sad. What sick mind would want to kill these colorful little birds? Land of the fruits and nuts indeed.

I hope pictures of the dead dirt bags that are responsible for this will appear soon.