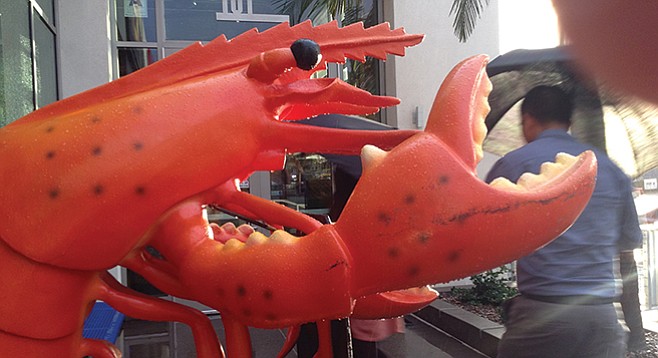 “You’ve got to eat the whole thing: head, legs, shell, and all, except the tail.”

Cucarachas? Never thought I’d be eating them tonight. But, Barrio Logan is full of surprises. 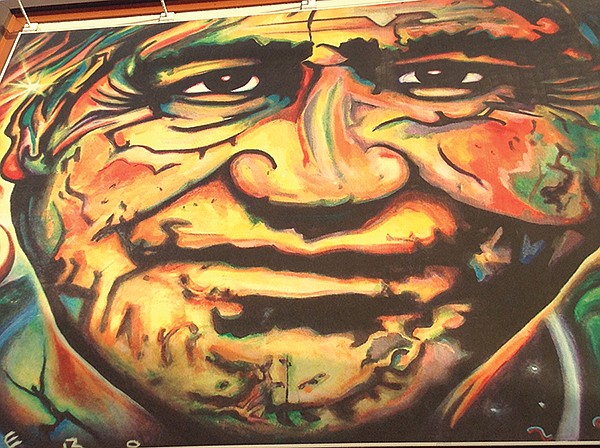 To get in, you head upstairs into the arms of a red, human-size shrimp reaching out to grab you with its claws. Me, I hurry in and land the last empty bar seat, facing onto Chávez.

“Spare? I ask the guy at the next seat.

“Sure,” he says. Name’s Sigifredo. “‘Sigi,’” he says. “My family’s from Nayarit. We know fish down there. I’m the cook in the family. Learned from my grandmother. She had 19 children. She was always cooking, and making food go further. So, I’ve come to check this place out because it’s seafood and it has ties to Nayarit.”

Great. I’m sticking with him.

So, the gal, Keyla, brings the menu. Way-big, with lots of blue ocean art in the background. Hmm... Appetizers’ first item is the “Trio del Mar”: scallop, octopus, and shrimp. Goes for — ulp — $18. Cheapest apps are $12: dishes such as crab cakes or fish chicharrón or calamari. But cheaper is a whole page of tacos going from $2.50 for the fried mahi mahi to $8 for the lobster. Burritos start at $11 for the fish, through, like, $13 for the Shrimporizo (shrimp and chorizo), $14 for the Surf & Turf — whoa — $19 for the lobster burrito. Octopus ceviche’s $20. And don’t even talk about the entrées. Grilled mahi mahi and shrimp, $29, and one I secretly crave, the El Pulpo Molcajete (loaded with fish, clams, mussels, octopus, jumbo shrimp, cheese, and fixin’s) for $30. Or if you add a New York steak, $36.

Have to wonder how a guy (yours truly, say, or the average Barrio Loganite) could afford all this. Except maybe happy hour? I see they have Taco Tuesday (which goes all the way from 3 to close), when you can get $2 fish tacos and $2.75 shrimp, marlin, or New York steak tacos. Or even surf and turf for $3.75.

But this ain’t Tuesday. Monday to Friday’s HH runs 3–6. Menu’s smaller and not so cheap. But still, it has possibilities. Fish ceviche tostada’s $3, shrimp ceviche tostada’s $6, oysters are $1 (but you have to buy six), chips and guac are $6.99, shrimp gobernador (grilled cheese?) fries are $8, and something called “shrimp cucarachas” is also $8.

I order a can of Tecate Light ($2.75), then take a look at what Sigi’s ended up with. He’s got a half dozen oysters (“nice and creamy”), a fish taco, and a shrimp tostada. The battered mahi mahi taco looks golden and begging to be eaten. The shrimp tostada has plenty of them, shelled and curled with avo slices.

Now, that I’ve got to try. First, though, I get the shrimp tostada ($6). It’s crisp and squelchy with little white curls of camarones and filled with fresh chunks of jicama, tomato, and onion, and softened with soft sticks of avocado. 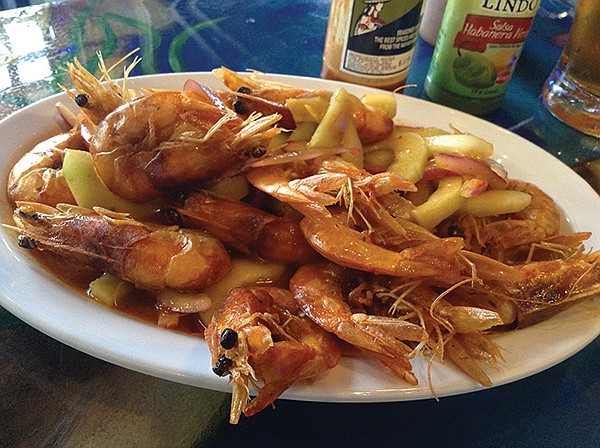 I order the shrimp cucaracha, and when it turns up, there are dozens of them: golden, steaming, spiky creatures, black eyes on sprouts looking at you amid the sliced cucumber and onion and sautéed garlic smells.

I pick up my first one.

“All these spikey legs and swimmers and feelers and, uh, eyes?”

“Two crunches and all you’ll know is the flavor.”

He’s starting to look at me, like, We have a certified wimp eating among us.

“But why cucaracha, ‘cockroach?’” I ask.

“Because the shrimp just look like them, whole in their shells. And because they are like them: shrimp, crabs, lobster, they’re actually related to cockroaches.”

He’s saying this as I’m holding the first one mid-air. I put it down. Just got to check that out. I go straight online. Huh. Yes, indeed. These guys are cockroaches’ cousins. They’re all part of the phylum (like, “family”) Arthropoda. Guess, like the dogs who wandered into the sea 50 million years ago and turned into whales, ancient cockroaches started learning to swim, too.

They’re prickly but delicious, and best if I avoid looking at their little black eyes. But the shells collapse easily enough. And result? The crunchy texture and garlic flavors are to die for.

As I leave, the Tucanes de Tijuana are singing “Mis Tres Animales”: “I live off three animals…my parrot, my rooster and my goat.”

I swear. A little bit of Baja’s burning in the Barrio tonight.