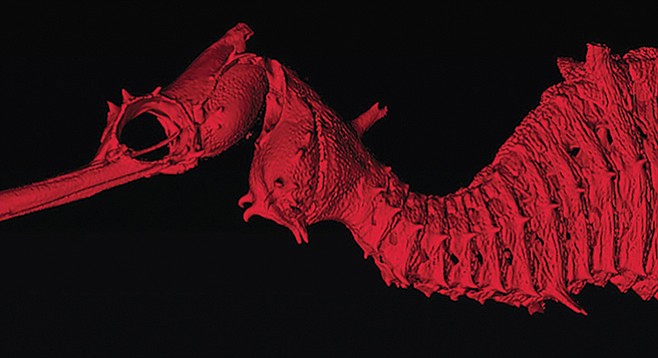 From Perth to La Jolla

It washed up on a Perth beach nearly a hundred years ago and had been stashed away in Western Australia Museum’s collection from 1919 until recently, when scientists at Scripps Institute of Oceanography obtained and identified it as a third species of sea dragon. The ruby sea dragon now holds its own spot among two other known species: the common (weedy) sea dragon and the leafy sea dragon.

Seahorses are found commonly around the world in shallow tropical or temperate waters while the common sea dragon, the leafy sea dragon, and the ruby sea dragon are only found in south and west Australian waters. Seahorses and sea dragons are similar in appearance with their horse-like heads, though sea dragons have a snout that is a bit larger and, unlike seahorses, their tails are not prehensile.

Since the discovery of the ruby sea dragon and following its seahorse propagation program, Birch Aquarium at Scripps has developed a similar program for the sea dragon. On Tuesday, June 7, Scripps is hosting a symposium with over 50 biologists, nutritionists, veterinarians and vendors.