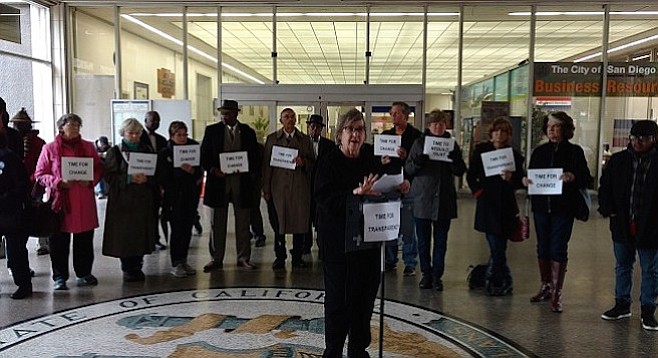 A group of activists led by Women Occupy San Diego submitted a draft ballot proposal to the City of San Diego that they hope will lead to an overhaul of the Citizens Review Board on Police Practices, an oversight body tasked with handling police complaints.

"The community does not trust the police, nor does it trust the citizens' review board, and we need to change that," said Women Occupy leader Kate Yavenditti at a press conference before the group filed its proposal with the city clerk on January 5. "We believe the proposal we've drafted will tremendously help relations between the community and the police."

One of the largest changes would be in how members of the board are selected. Currently its 24 members are chosen by the mayor's office, but under the new plan the board would consist of 27 members, with three selected by each of the city's nine councilmembers. The group says this change is needed to better reflect the diversity of San Diego as a whole and combat perceptions that lower-income districts are unrepresented on the current board.

Proponents of the new measure also seek to block police representatives from attending and attempting to influence boardmembers during sessions in which complaints are being considered, and to install independent legal counsel to replace city attorney staff, which currently provides legal advice.

"There's clearly a conflict of interest in [the city attorney advising the board]," says Yavenditti, noting that the same office that advises on the validity of complaints is tasked with defending the city against claims that arise from them. "The city attorney's interest is in reducing liability for the city. They don't want lawsuits or sustained complaints."

After meeting with city-council members and staffers regarding their demands, Women Occupy reached the conclusion that an amendment to the city's charter was necessary in order to implement the proposed changes. Rather than gathering signatures to force the measure onto November's ballot, they instead submitted the proposal for consideration by the council, which can still decide to do so. January 5 was the last day for such suggested ballot initiatives to be presented.

The updated Community Review Board Ballot language will be heard at 9 am on January 13, 2016 on the 12th Floor of City Hall at a City Council Rules Committee hearing.

Hooray for the ladies with cajones enough to stand up to this phoney pretense called Citizens Review Board on Police Practices. Between a police chief that gives the cops body cameras and then refuses to release the content to the public, to the outright executions, beatings, assaults and sex offenses committed by the police, it's getting hard to tell who the criminals are around here. Having the city attorney on the board is such an obvious conflict of interest, it's easy to see the board is a fraud. Hey, that's life in good ol' Sandy Eggo. If you ask me, something stinks in Hooterville. Go Occupy!