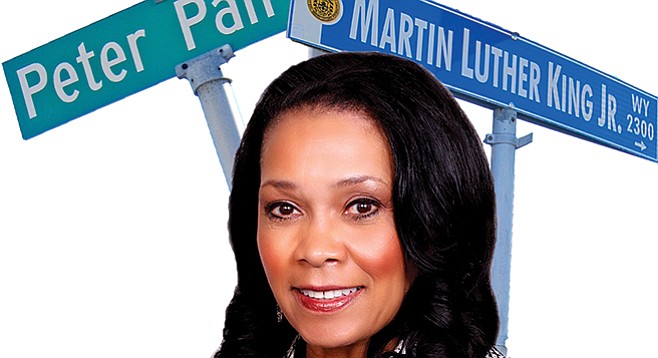 Where the streets have no name

One San Diego City Council member has her priorities straight

Neighborhood pavement may be pocked with gaping holes, but before the city gets around to fixing the streets, one San Diego City Council member thinks there ought to be more “honorary street names.”

According to a January 27 memo from the Fourth District’s Myrtle Cole, “The purpose is to honor an individual and/or organization that has gone far beyond what was or could have been expected in contributing to the quality of life of San Diego and its diverse communities.” For those seeking contemporary glory, there’s a possible catch. Unless “waived by a majority vote of the city council,” honorees would have to be “deceased for at least five years before being proposed for an Honorary Street name,” according to Cole’s suggested policy.

Judging from the “financial considerations” Cole’s office listed regarding the designations, it may also help to have friends at city hall. “The cost to install honorary signs on both ends of the street (no longer than a one-block radius) will be the responsibility of the sponsoring Council District Office. The approximate cost of a street sign installation ranges between $120–283.”

Meanwhile, the influence-peddling business of Democratic ex-city councilman Tony Young, Cole’s predecessor, was more lucrative than ever in the final quarter of 2015. In addition to $22,000 from Sempra, he picked up $27,000 from the Otay Water District. Ten thousand dollars came in from shopping-mall giant Westfield, and the downtown office of Buchanan Ingersoll and Rooney paid the same for Young to lobby city hall regarding a “contract procurement” for legal work. San Francisco’s Airbnb home-stay outfit paid him $5000.

In addition to the five year rule, there might be another five year rule. If the street has been free of potholes and drive-able at the speed limit for five years, then it can be honored. While I'm not highly familiar with Council District 4 in whole, I'm familiar with a small portion of it, and the streets in that area are a disgrace. They've been deteriorating for the thirty-five-or-so years I've been going there, and nothing ever happens to make me think that the city might finally repair or repave them.

So methinks Councilmember Cole has her priorities misplaced. Start with having the streets repaired and repaved. Once that is done, and only then, start giving those streets honorary names.

Or name pot holes after honorees like Mayor Faulconer etc. I'll bet they will get fixed.

Recently elected female representatives from City Council District 4 and overlapping District E San Diego School Board -- both Democrats -- have been a disgrace to their constituents, to their political party and to their African-American heritage. School Board member Marne Foster finally has resigned under a misdemeanor cloud after abusing the power of her office and Myrtle Cole has sold out to development interests while feathering her own nest, much like her predecessor Tony Young. It is a pity.

Politics and political office is no longer about service but about feathering the nest.

How about naming streets after corrupt officials both local and statewide? Not to honor them, but to keep from forgetting and letting them hide without shame.

The cost to install the signs would be the "responsibility" of the Council District, per Cole's proposal? I certainly hope she clarifies that. If it's coming out of their budget, that would be wrong and if it's coming out of some special fundraising effort by the District, that would be worse. And perhaps illegal? She needs to explain if this is just new streets or old streets. Changing names of streets is very unpopular and costly to the residents or businesses. Seems as though it's kind of coming out of the blue. Is this a real priority for District 4? I doubt it.