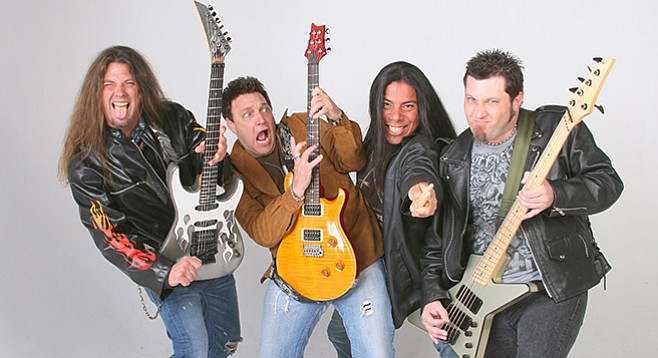 Hard to walk away from the 6ONE9

After 16 years in San Diego as a band, tours of Asia, an appearance at San Diego’s one and only Super Bowl, and numerous hometown gigs, the ’80s metal cover band 6ONE9 is calling it quits.

“My dad’s not doing well, healthwise,” says founding member Casey Mink, “and I need to move back to Kentucky to take care of him.” Mink, 49, a native of Kentucky, has lived in San Diego since he was 8 years old. “This lineup’s been together for the past six or seven years,” the lead guitarist/vocalist says.

The current 6ONE9 includes drummer Jorge Palacios (who is also a member of Rick Springfield’s tour band), bassist Gregg Repp, and second guitarist Jef Poremba, who has plans to move on to a new band with Dokken drummer Mick Brown after 6ONE9 winds down.

Mink, a retired Navy veteran, says both past and present band members will be onstage for their final show on February 20 at the House of Blues. “We’ve played everywhere,” he says. “4th&B when they were still around, the Belly Up, all the big ones. In Japan and Korea, we started out by playing the military bases.” The success of those shows got them invited back to play for the troops four times. The Super Bowl in 2003, between the Raiders and the Buccaneers, he says, was another thing entirely.

6ONE9 and Relax Max

“We got hired by Jack Daniel’s to play in their pavilion out in the parking lot.” He explains that there were many such vendor pavilions stationed throughout the parking area on game day. “The Jack Daniel’s gig was a blast,” he says. “Lots of free samples.”

What will Mink miss most about San Diego? “My friends,” he says. “That, and the weather, of course.” Then later in the conversation he adds, “I’m going to miss this band, too. It’s hard to walk away.”