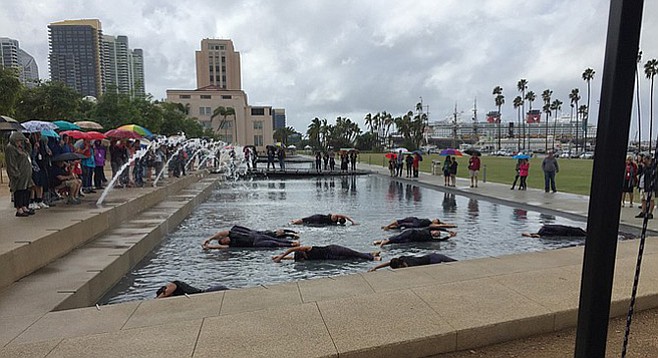 More walking than riding, but the annual event is still worth it 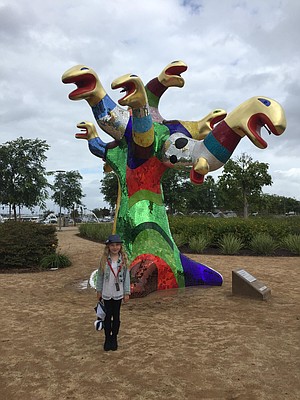 Olivia at the starting point for the Trolley Dances, with her umbrella in tow

After many years of ogling cool images of dancers performing in unexpected locations, and even spreading the word both in this magazine and on the radio, I finally got the chance to experience the San Diego Trolley Dances for myself.

The chances of an event in San Diego getting rained out are so slim, that even though it was pouring when I left the house in the morning, I still didn’t bother with an umbrella. I picked up my 8-year-old niece Olivia, who is concurrently taking four dance classes, and was smart enough to grab an umbrella for herself.

For $35 general admission ($25 for seniors, $15 for students/active military, free for children and anyone in a wheelchair), you get six site-specific dance performances, one trolley ride, one bus ride, and a lot of walking in between. When I learned the starting point was on Harbor Drive and the end point Balboa Park, I asked David to drop us off and pick us up. When it was over, I wanted to be able to leave for lunch without having to public-transportation my way back to the starting point. This turned out to be a great way to go, as friends later complained about how long it had taken them to first figure out, and then actually make the journey back to their cars. 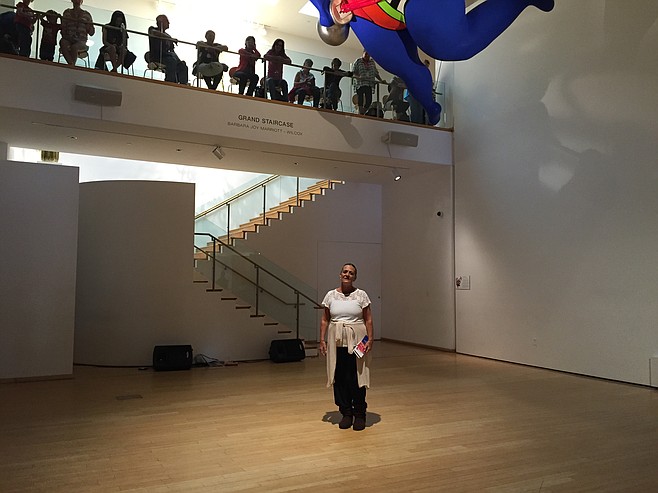 We began at the Reflecting Pool in the new Waterfront Park. It was a magical way to begin the day, as dancers emerged from the pool and used the water as a prop throughout the routine that was choreographed by Stephan Koplowitz. It was fitting that the most rain we got during the day was during this dance. Olivia hid beneath her umbrella, and I tucked under the shade structure that had been set up with seating for those who needed it. Speaking of seating, we were on our feet from the moment we arrived to the time we left (over two hours total) including while on the trolley, which was packed to the hilt with the huge crowd. I was glad I wore comfy shoes, but with all the walking and humidity (it was raining, but still over 80 degrees out), I noticed I wasn’t the only one wiping sweat from my brow.

From the pool, we hoofed it to the other end of the park, where a group of women performed another piece, entitled “Blue Stillness,” on the coolest looking playground I’ve ever seen. This one was choreographed by Jean’s daughter, Liv Isaacs-Nollet. It was after this graceful piece that we got on our first, and only trolley of the day. But first we had to walk to the station. The trolley took us one stop downtown, where we got off and walked to a waiting bus. Here, my niece and I scored a seat, and we enjoyed every second of riding in the clean, air-conditioned vehicle all the way to Balboa Park. 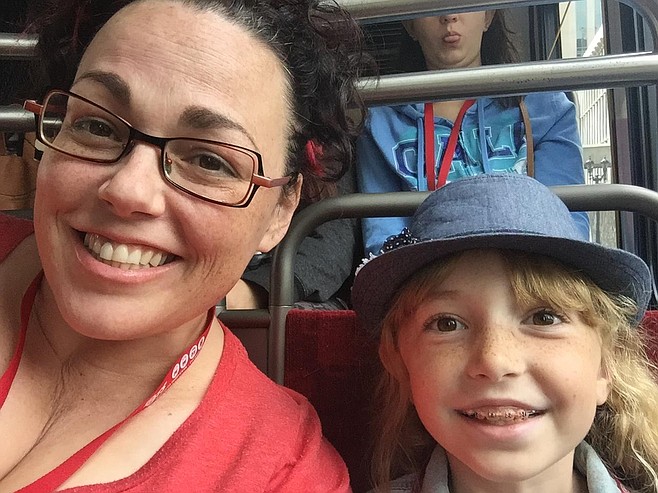 Me and Olivia on the bus

Because of the rain, two of the dances could not be performed at their intended locations. Instead, they took place inside the Mingei Museum, where a third dance was already scheduled (full-day access to the museum was granted to all Trolley Dances ticket holders). There was one more dance to be performed in a fun location, and that was “Back to Front,” choreographed by Mark Haim, performed in a colorful alley within the Spanish Village Art Center. This playful piece drew many smiles and laughter from the crowd, and was Olivia’s favorite, mostly because it included a cameo of a funny-looking dog. 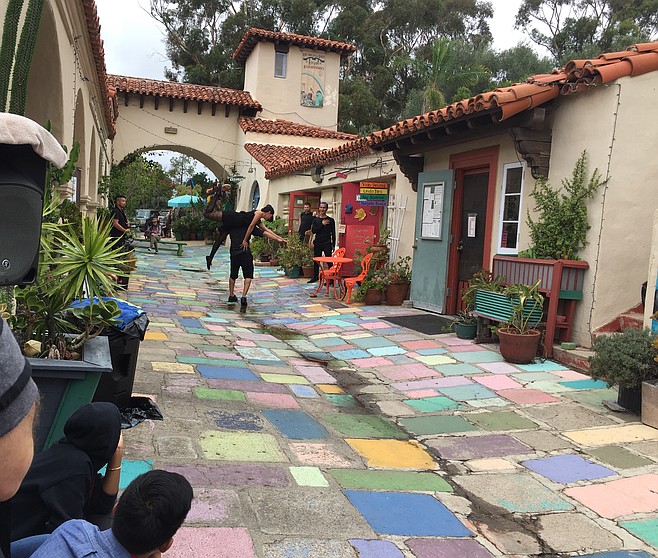 Dancing in the alley at the Spanish Village

My favorite performance of the day was “Become Ocean,” which was choreographed by Jean Isaacs herself. Even though it wasn’t presented in its intended location at the entrance to the zoo, the music and movement of the dancers mimicking water and waves were mesmerizing. The other, which was supposed to be performed before a giant fig tree but was instead held in an exhibition space at the Mingei that featured West African art, was the most lively of all the dances. The audience was encouraged to make noise that contributed to the celebratory “Roots, Soul, and Love!” routine that was choreographed by Suzanne Forbes-Vierling. My face hurt from smiling afterward. 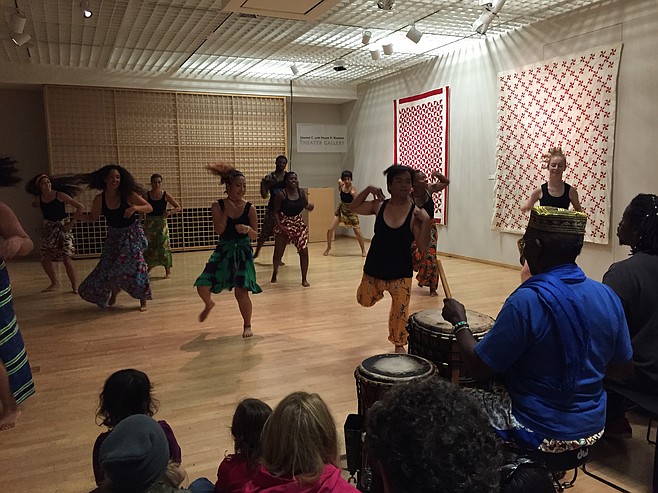 The finale, “Giving Way,” was choreographed by Anne Gehman. This dance confused Olivia, who kept looking at me as if to gauge that everything was normal, especially when the dancers began to shake and shudder as though having an epileptic fit. Towards the end, dancers paired up, one leading another whose eyes were closed, in a beautiful demonstration of trust. Of course, I was biased the moment I heard Nina Simone’s voice, as the number was set to her music.

From a novice appreciator of dance, I can say I’ll definitely among the first in line next year to get my ticket and see what’s in store, come rain or shine.